Following the recent iOS update, I was scrolling through my apps to see if I needed to turn on the new “Offload Unused Apps” feature. Every time there’s an update – or for that matter, any time I receive the “you have too much stuff” message on my iPhone 7 Plus, I start looking at old apps. You know what? It’s overwhelming. I hate the idea of deleting something that I might need some day. That’s kind of how everything in my life is and I agonize over ridding it from my life. But this is different. Something digital doesn’t really seem like clutter.

And I’ll emphasize… seem like clutter. It really is.

Did you know in 2016, people spent 1 trillion hours worldwide using apps according to App Annie. In a U.S. Cellular survey (conducted between November 10-17, 2016), the most popular app categories were entertainment including photography, social media, gaming, reading and surfing. Although extra apps that we never use don’t feel clutter-ish, they’re not only taking up space that could be better used for something else, they also slow down your device 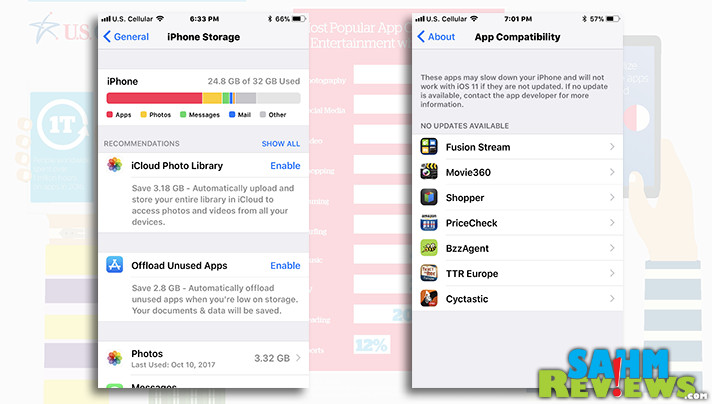 In the past, I’ve been afraid if I deleted it, then I wouldn’t be able to re-download it. In some cases, that is true when I started looking at apps the other day, there were a half dozen or so that weren’t even compatible with iOS 11. That made the decision to delete MUCH easier since they wouldn’t even open.

Here are a couple tips on how you can de-clutter your device: 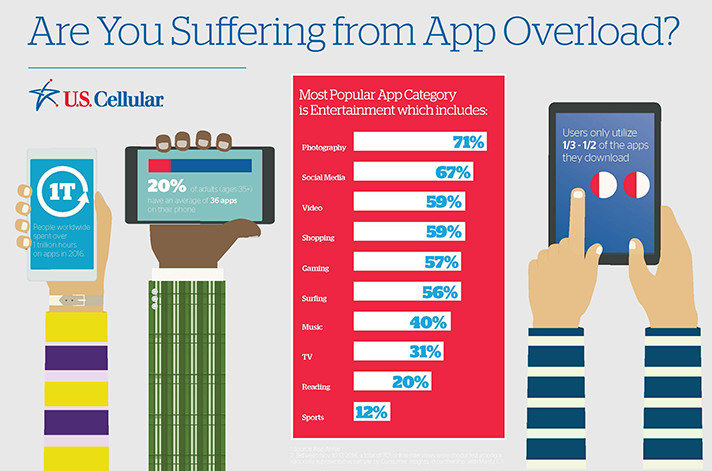 It does the work for you by checking for unused apps, uninstalling them while maintaining the documents and data on your device.

As backwards as it sounds, I mean just that. But not just ANY app! Utilize something like Magic Phone Cleaner or DiskUsage to determine which apps to delete. 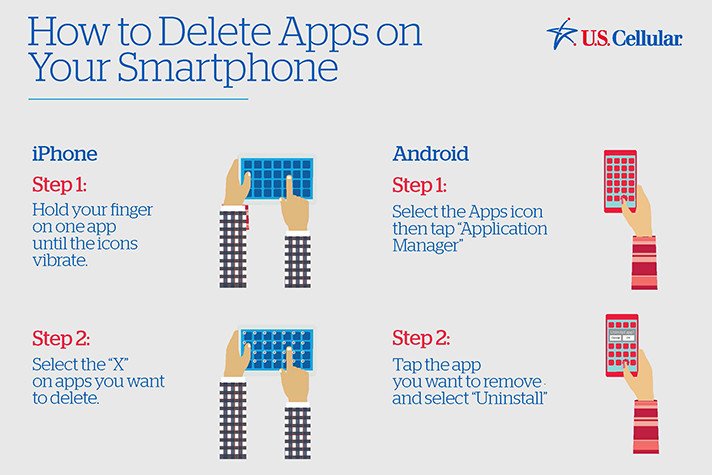 Yeah, I know I didn’t need to repeat those words. It makes just as much sense to have multiple apps that do the same thing. I’m not referring deleting ones that have multiple purposes such as Uber vs Lyft or American Airlines vs Delta. But there’s no reason to have multiple photo-editing apps, especially if you end up using an online program anyhow. The fact that iOS 11 offers the ability to edit on the fly is another reason to kill off unused photo editing apps. Do you really need SimpleNote, Evernote and OneNote on your iPhone? How about Maps.Me, MapQuest, Waze AND Here We Go? Pick the one(s) you use regularly and ditch the rest. Your bloated phone will thank you.

Go into your settings and look at the storage options. Sort through the apps that take up the most space and delete the ones you don’t need. We’ve discovered older apps (often games) that take up more space than we realized. Just delete those.

A picture is worth… TRANSFERRING!

If your phone is filled with valuable photos that you want for family archives then transfer them onto your home network, a removable hard drive or even USB sticks. Unless you plan to share them on social media, there isn’t a need to have them bogging down your phone. If the photos are mindless, one-off photos (AKA what you ate at the restaurant 6 months ago) then consider deleting them.

Whether you delete things all at once or chip at it a little at a time while stuck in a waiting room, make a point of dedicating some time to de-cluttering. You’ll be happy you freed up space for the latest and greatest app that you can’t do without.

What is an app you used to swear by but have recently found to be outdated or defunct?

7 thoughts on “De-Clutter Your Smartphone and Tablet”