Home / Recreation / Events / Did a Character Sing You Happy Birthday? 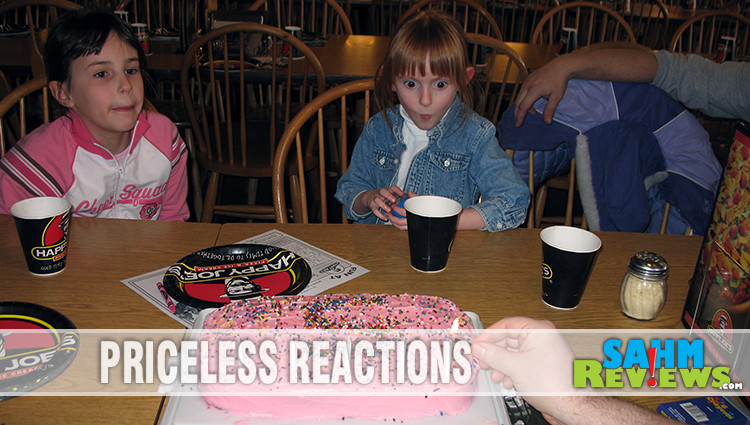 Did a Character Sing You Happy Birthday?

A friend of ours recently sent us an invitation to join them in celebrating their son’s 1-year birthday. While we had prior commitments and were unable to attend, I was pleased to see their invitation asked for a letter addressed to him to be giving to him when he was older.

I have vivid memories of a visit to our local park when we were living in Los Angeles. Our girls were just babies at the time with no family living nearby so birthdays were pretty simple for us. But on this day, we witnessed a family who had rented a pavilion at the park, had a giant bounce house, a ton of guests and decorations everywhere. There was a large banner that said “Happy 2nd birthday, (child’s name).”  At least I *think* it said 2nd and there may have even been a pinata. Okay, so my “vivid” description is more like a “strong-ish” memory. It was years ago and I was too busy being judgmental to really soak up all the details. All I know is they spent a LOT of money on an event that the child wouldn’t even remember. It set the stage for high expectations. 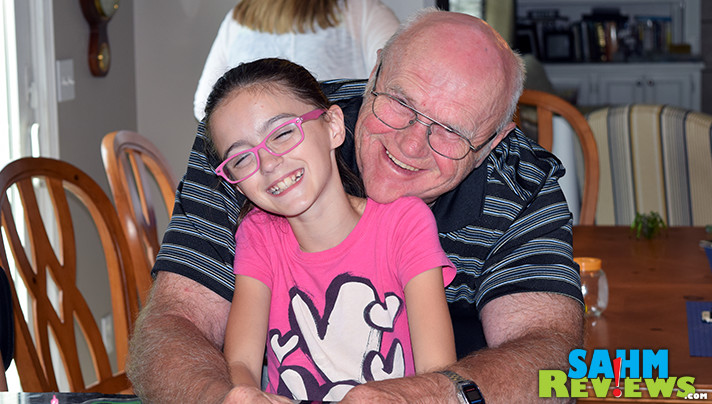 When we moved back to the Quad Cities and the kids started school, we set a rule. Every other year they would get a “big” party where they could invite multiple classmates and friends. On the off years they could invite one friend to celebrate with our family. The big years meant something like Chuck E Cheese or bowling, complete with a personalized cake. And in case you’re curious, no, we don’t do “gift bags” for the attendees when they join us, Don’t even get me started on that.

Why have we deprived our children of grand spectacle for their birthday? We felt there were ways to make it special without going overboard. The focus of a child’s birthday is the child and the people who make that child happy. Not the cake, not a bounce house, not even the gift. We wanted our children to celebrate their birthday ON their birthday and to recognize that it’s the people that make it a special day. As they have gotten older, they have been looking back on past birthdays and recalling which relatives didn’t attend. Not complaining about lack of having every kid in the class at a destination. Not about the gifts they received or the decorations (or lack thereof.) They’ve remembered the people, breakfast in bed, some gifts and some pretty memorable cakes. Each year we incorporated some of their favorite things. Here are some examples. 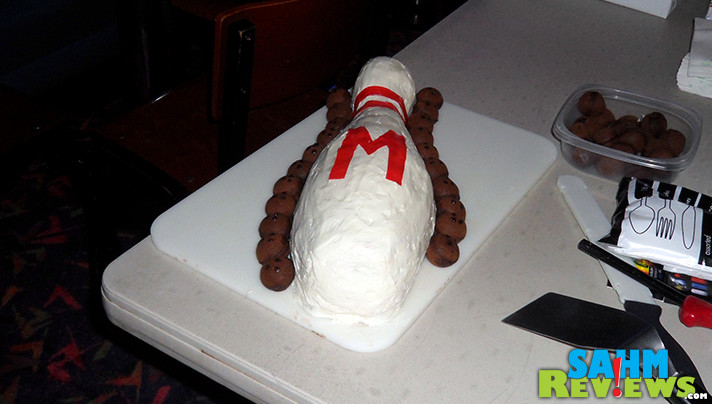 For a birthday scheduled at the bowling alley, this ice cream cake shaped as a bowling pin complimented by cake ball bowling balls was an absolute hit. There was none to spare! 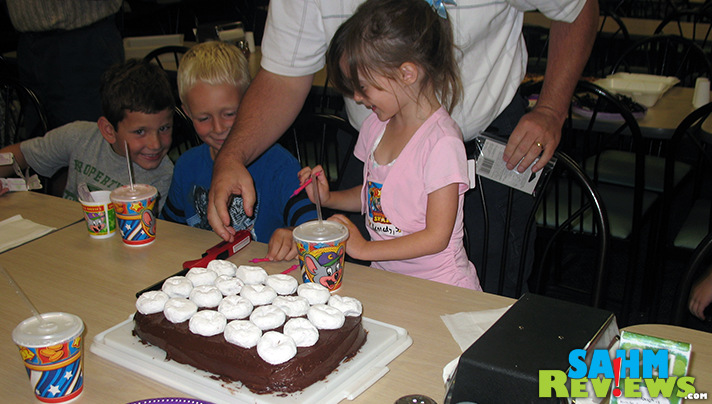 Don’t laugh, but her fascination for powdered donuts has been ongoing. This year we ran to the store to pick up powdered donuts and a Starbucks Vanilla Bean. Several years ago, we topped the cake with donuts and cut it so every piece included one. I’ve been told by many people they thought that was the best cake idea ever. So simple, yet so perfect. 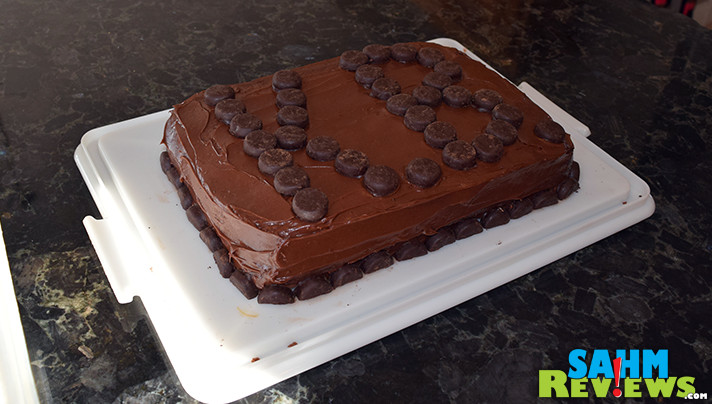 If you like York Peppermint Patties, doesn’t it make sense to adorn a cake with them instead of sprinkles? Seeing as I like mint as much as Kennedy, I certainly wasn’t going to argue when she wanted something minty. 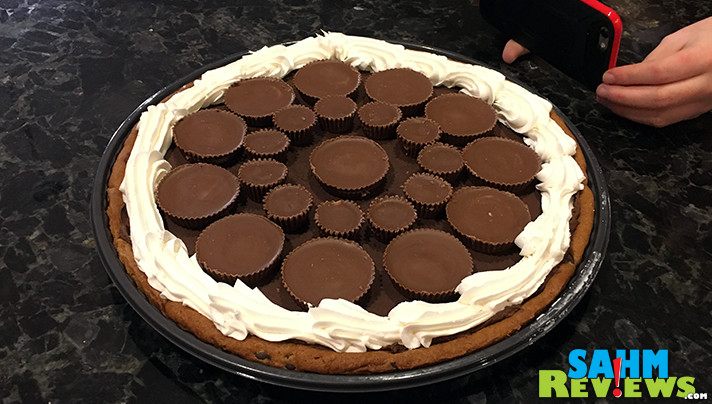 Then again, Madison thinks Reese’s Peanut Butter Cups are one of the best candy bars so naturally, we modified a simple treat to include all kinds of cups of deliciousness. Of course, perfect spacing meant there would be something on every piece!

But if you want to be really silly, make a simple cake and guard it with gummy bears. Chocolate and gummy bears may not sound like an awesome combination, but if you visit a candy store you’ll find chocolate covered gummy bears. So yeah, it’s a thing. 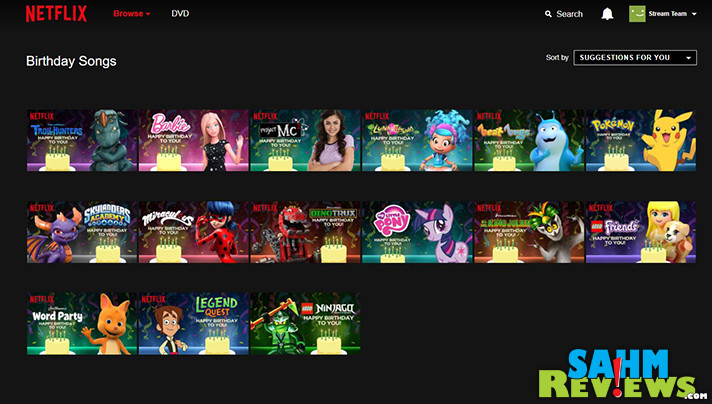 The whole point of a birthday is finding ways to make it special and memorable. That doesn’t mean you have to spend a lot of money. Netflix announced another way to surprise your child: with the birthday song sang by a favorite Netflix character. Options include Barbie, Project MC2, Miraculous, Skylanders Academy, Pokemon, LEGO Friends, LEGO Ninjago, My Little Pony and more! Fire up Netflix when it is time to sing and your child will be amazed that these digital friends remembered their birthday.

We’re big advocates for making things meaningful and not necessarily by adding dollar signs to the budget. These memorable cakes – and tricks like a Netflix Birthday are examples of things we do.

What special tricks do you use to ensure it’s a Happy Birthday?

7 comments on «Did a Character Sing You Happy Birthday?»