Do you remember this past holiday season’s great list of games under $29? Most of the games suggested were from established hobby game companies. One title stood out in particular because it was from a small independent publisher and had just recently completed a successful Kickstarter campaign for their featured card game, Cats. When it comes to crowdfunded games, it’s always been our policy at SahmReviews to only feature titles from issuers that already have a couple other titles under their belt. First-time campaigns are just too risky for our readers, and we would feel guilty knowing you didn’t receive the product you were promised at our recommendation.

In fact, up until now there have only been three Kickstarter projects we have felt confident enough in the companies behind them to bring to you. First was the highly successful 9-game offering from Calliope Games where you also got some say in the design decisions of each title! Then there was the cute card game from Pencil First Games, Gem-Packed Cards. And our friends at CSE Games were making their first foray into the crowdfunding world with Fantasy Fantasy Baseball this past December, also with known designers working behind the scenes.

So when we recommended Cats by DPH Games, we knew you would be pleased with your purchase. Let’s take a look at their other two popular titles just in case you aren’t a feline fan!

I’ll preface this by saying this game isn’t for everyone. Not because it is particularly complex, but because of the theme. As you might have guessed by the name, Psychological Warfare is a battle between players using items and theories from the world of psychology. Your goal is to collect points in all four categories (freedom, fun, belonging and power) and are awarded victory points for each category in which you have the highest or second-highest total. 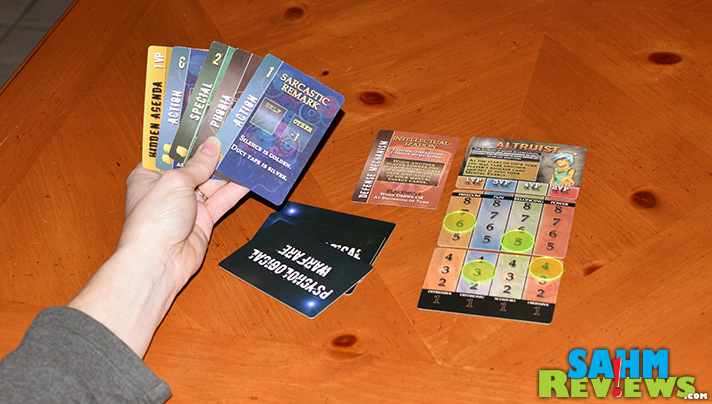 Everyone begins the game with a hand of five cards and three face-down cards in front of them, referred to as “Mental Energy”. These are your currency for the game and must be spent in order to play some of the other cards in your hand. On your turn you may choose to turn any or all of the cards in your hand into Mental Energy and then play one action card, paying its cost and resolving the effects. 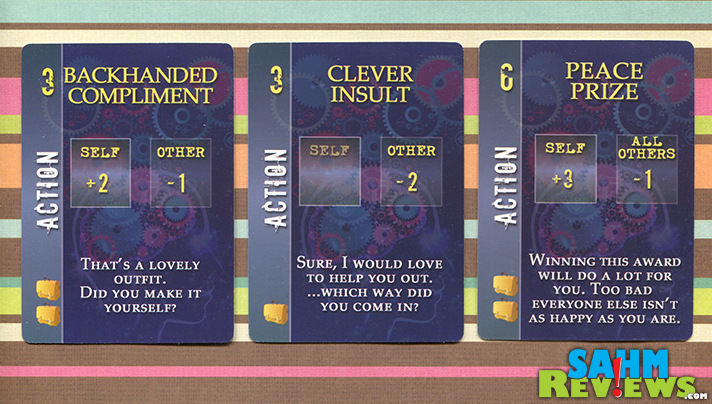 For example, to play a “Clever Insult” card, you must spend three Mental Energy (three face-down cards) and this allows you to move the token on one of your categories up two spaces while moving an opponent’s down one. If the card played happens to have a baggage icon on it, it must be set in front of the player who played the card. Then you may draw up to your hand limit of five, minus any baggage cards attached to you.

There are also a number of special cards that all do different things. Get past the psychology-centric titles and you’ll find good descriptions of what each one does printed right on the card. Some are “Defense Mechanisms” that will block something your opponent is trying to do to you. Others might completely negate the effects of their Defense Mechanism! 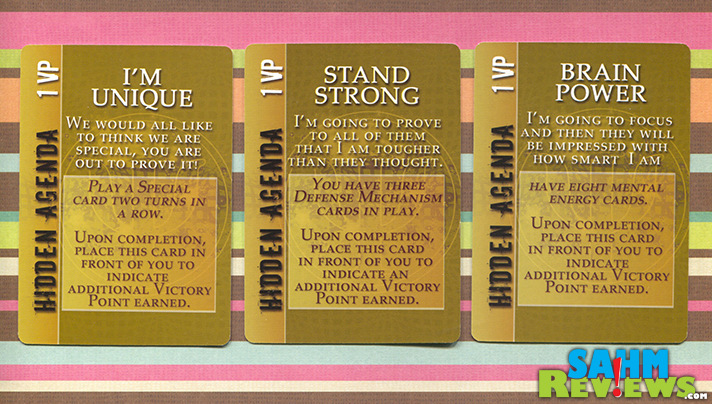 Randomly seeded throughout the deck are “Hidden Agenda” cards that will give you a goal to obtain separate of all the other players. These earn you valuable end-game victory points and are awarded immediately once you have met their criteria. 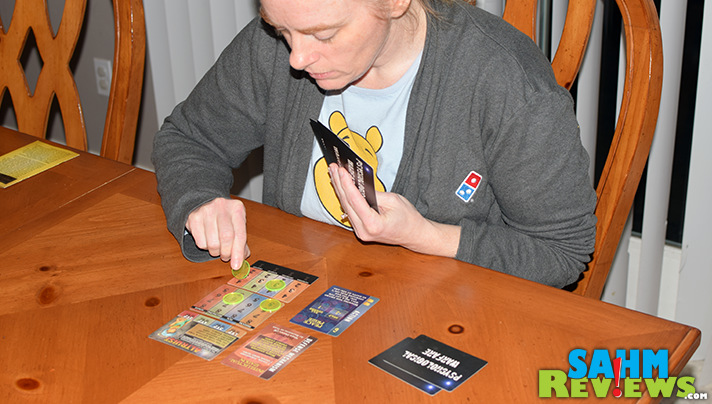 As you have seen, Psychological Warfare is a rather straightforward game that most any age could play if it were not for the theme. Pre-teens will have no idea how the cards relate to one another or even have any understanding of the concept at all. However, for teens and older it is a fun take on the mental health industry in game form that should only take about 30 minutes to complete. As always, find a copy for yourself on Amazon or direct from a local retailer!

Cache Me if You Can!

On the opposite end of the spectrum is Cache Me if You Can, a game about geocaching that will appeal to all ages. You want to be known as the most successful geocacher in town, and the only way to prove it is to get out there and find more than everyone else!

If you’ve ever been geocaching, you know that the hobby is full of hidden surprises and sometimes aren’t that easy to get to. The caches might be hidden in Tupperware containers or coffee cans. Sometimes in old ammo cases – which is where DPH Games got the idea for their unique game box in the shape of a military ammo container! 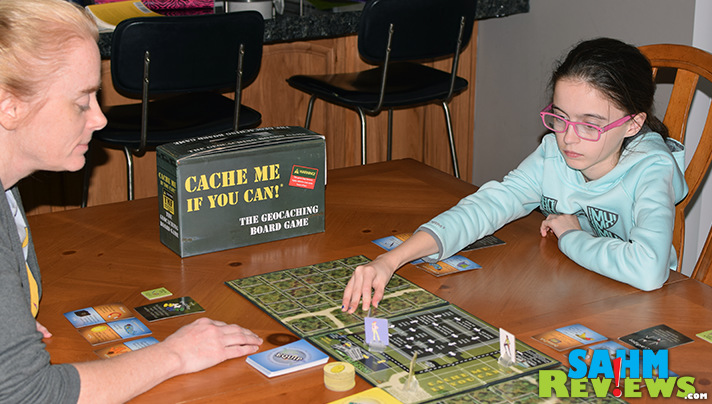 The three-piece board can be configured in any manner where the paths meet and are randomly populated with included woods tiles. On your turn you may move your hunter three spaces along any road or trail, or one space off-trail or in a building. 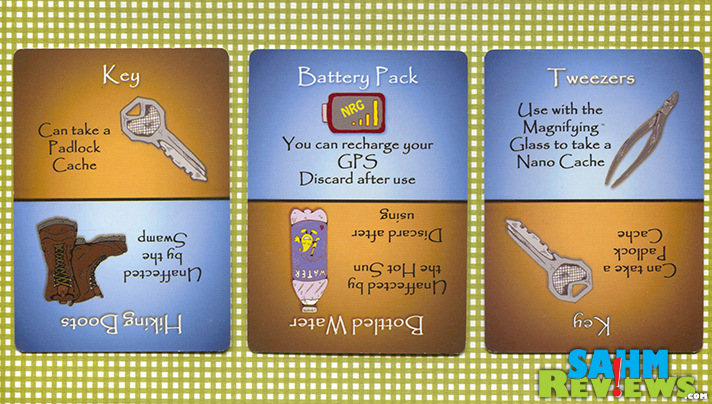 When you’re searching in the woods you might find caches, poison ivy, bears, new trails or even nothing! Move onto a spot, reveal the tile and either collect it (if able) or place it face up for everyone else to see. Some caches require special equipment to collect, which are obtained at the sporting goods store or may have been one of the three pieces of equipment you start the game with. 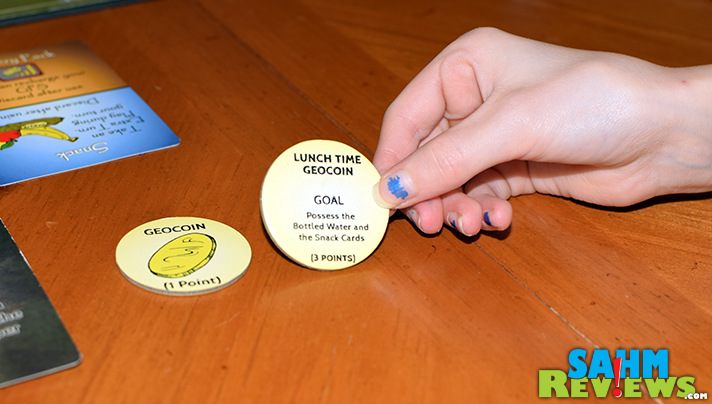 Some caches have special geocoins inside of them, allowing you to gain an extra point or more if you are able to complete the task on the reverse. Run into the bear and you’ll be immediately sent to the hospital where you’ll spend the next two turns unless you have the proper insurance (another equipment card) to get an immediate discharge. 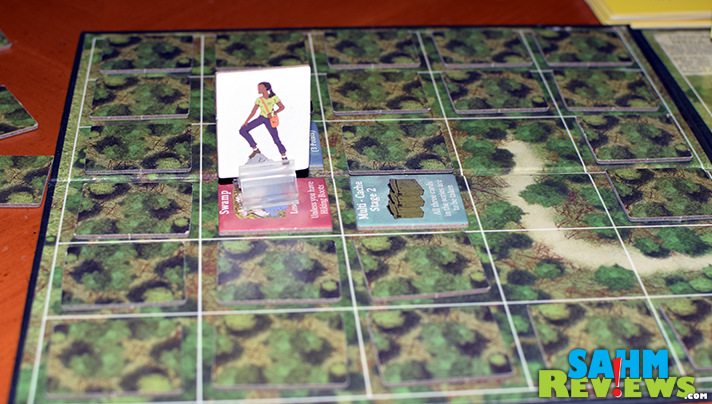 But the most important piece of equipment you have is your pen and GPS device, the two things needed for even the most inexperienced geocacher. Lose either one of them and you’ll have to trek back to town to visit the Swag Store to get a replacement before you can collect any more. 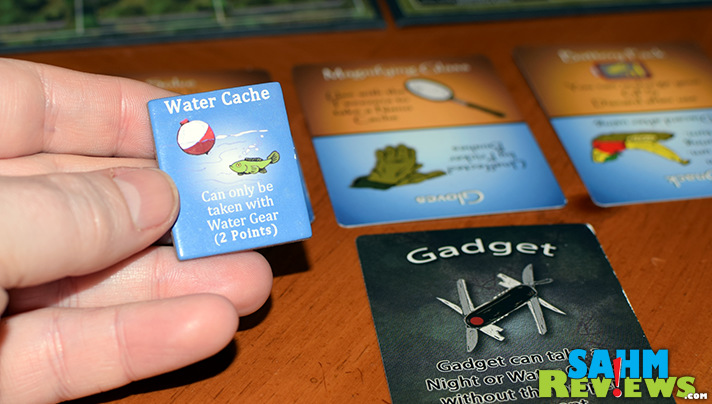 Cache Me if You Can has so many different variables in the equipment cards, the woods tiles, board setup and goals that no two games will ever be the same. And to top that, DPH Games even offers printable cards to twist up the game on their website!

If I had to pick between these two games, I would obviously go with the latter even though it is slightly more expensive. Buy direct from DPH Games via their Amazon listing or through one of their authorized resellers. And be sure to watch their Facebook and Twitter timelines to see what they have coming out next!

Have you ever been geocaching?

15 thoughts on “The Psychology of Geocaching (and Cats)”