If your family is anything like ours, you’ve spent the better part of the past few months fighting off colds and the flu. For us, flu shots did no good this time around and it ran rampant through the household over Christmas break. Now it seems the common cold has hit the schools, and with it comes coughing, sneezing and low-grade fevers. Our schools have a policy that if the fever isn’t over 100, there must be another symptom present before you keep them home. Ours has them all – fever, coughing and congestion. Overall she ‘feels fine’, but I’m sure is very contagious. More than enough reason to give her a day off to rest.

I remember staying home from school in the 70’s/80’s meant a very boring day. I’d read a book or play with my toys. The only things on afternoon television were either soap operas or programming for toddlers like The Electric Company or Sesame Street, and I had seen all of those already. But today things are much different. Kids have phones, iPads, satellite television and the internet to keep themselves occupied. But staring at a screen all day long isn’t my idea of them getting rest, and certainly isn’t providing them with any educational value. So to help stimulate their brain, we do what we always do – play games!

We needed something that was easy to learn, wasn’t too long but still helps her develop her growing brain with tactics and strategy. Today’s choice would be Titans Tactics by Imbalanced Games. Billed as a fast-paced 2-player skirmish board game designed to deliver deep strategy in 30 minutes or less, we tackled it in earnest, tissue box within reach. 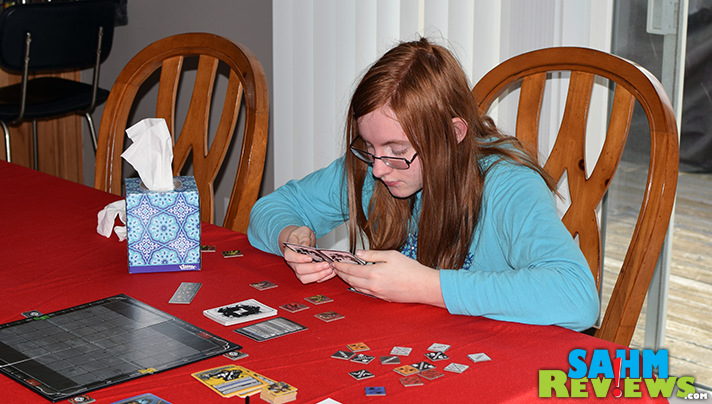 In Titans Tactics you command three champions from one of five included factions against an opponent of equal size. The factions are widely varied and include the Created (cursed creatures and mutants), the Crew of the Returner (misfits, scoundrels and pirates), the Dreamers (wizards, warriors and dragons), the Crucible of Order (zealots, angels and elementals) and the Black Brigade (undead soldiers). The base game includes six different champions in each faction, allowing you to customize your team with any three. 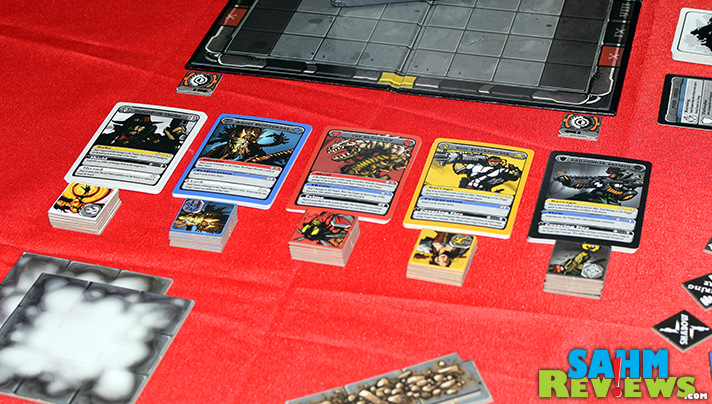 This isn’t your typical kill-the-opponent’s-characters type of game. In fact, all champions are indestructible and have unlimited health. Titan’s Tactics is a game about balance and momentum. In fact, those are the only two methods of winning! 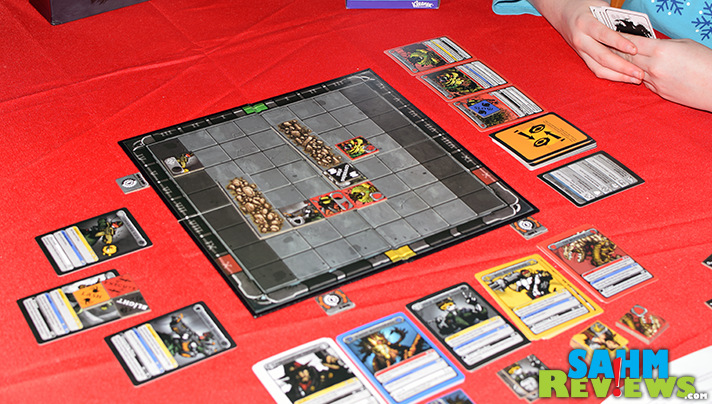 Damage is kept track on a score track that moves between the players as they do damage to each other. If one player is able to out-damage their opponent by 10 points, then they are declared the victor. At the end of each round, momentum is awarded to the player who has this scoring marker on their side of the board. Think of it like a tug-of-war, with each side trying to move the flag to their side of the field. Momentum is given to the player with that flag on their side when the whistle blows. 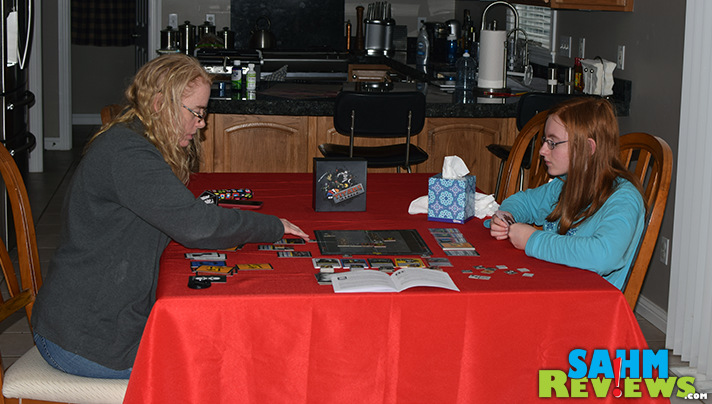 In one round, each person will activate their champions once, for a total of three actions each. You can choose from yielding (passing), moving or activating an ability for each action. Your last action can also be to draw three cards into your hand. 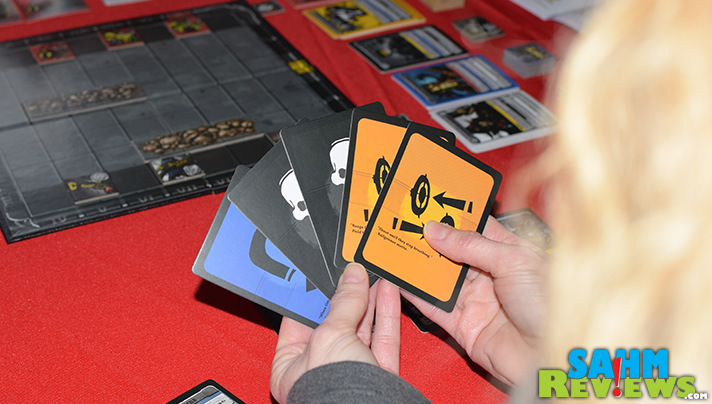 These color-coded cards are your currency, used to pay for the abilities you wish to utilize. There are five colors, but each champion can only use up to three of them. You do not draw cards randomly, you choose which ones you want from the deck so you do not end up with useless colors. This mechanic takes all of the randomness out of the game and makes it a 100% strategic and tactical battle. Hand-management along with proper positioning of your champions is what will be needed in order to be victorious.

There are a number of effects that can be applied (both positive and negative) along with special perks for each champion denoted on the card. If you’re interested in full explanation of the entire ruleset, check out the video they put together!

And sure enough, right at 30 minutes on the nose for our first game! We are looking forward to additional rounds utilizing the included advanced rules that allow summoning of spawns and shrouds, as well as trying out the other factions and optimizing our champion choices. Once we’ve mastered the base game, we hope to bring you details about Imbalanced Games’ first expansion, Titans Tactics: Champions, which was released last fall!

Take a look at their Facebook and Twitter timelines for new release announcements and maybe a discount from time to time! And for now our prescription is more liquids, rest and of course, games!