This past Tuesday started pretty early for me. The alarm on my phone went off at about 3:20 AM to alert me of a tornado warning and to take cover immediately. It was the start of an exciting day; once the warnings had subsided I was perfectly happy to stay awake because I was getting “on the road” to Chicago. Tuesday marked the first of three Disney Social Media Moms “On-the-Road” events and I was going!

Registration for the invitation-only event started at 7:45 AM where we received a swag bag of gifts from the sponsors. Once the doors opened we were greeted by signs and evidence of all things Disney. The team at BSM Media did a fantastic job as usual! Part of the room had a few sponsors and the other half of the room had displays for photo opportunities. The tables were all decorated with cute little suitcases and signs. 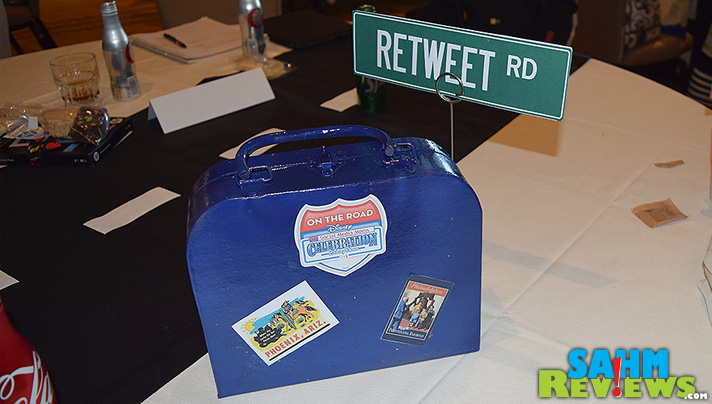 The event was scheduled to close at 1pm so they had to cram a lot of information into a very short period of time. The emcee of the event was Jamie Langdon, Walt Disney World public relations and social media manager. After a greeting from Leanne Jakubowski O’Regan, Director Social Media for Disney Parks, Gary Buchanan took the stage. He shared with us some new and exciting things happening around the parks. My biggest takeaway from his presentation where the details about Bethe8thminer.com website and the weekly challenges they’re offering in honor of the opening of the new Seven Drawfs Mine Train ride.

Jenn Fickley-Baker shared a lot of details about what happens behind the scenes on the Disney blog. While discussing how they determine and gather their content, she explained that their focus is about storytelling – citing the Ultimate Tweet # to announce the Rock Your Disney Side event where the parks would be open for 24 hours. They used 140 Disney Characters to form a hashtag (#) that was photographed and shared. Since many of these characters are never seen together, it provided a great opportunity to create some fun and engaging content. She also shared some cool information like how some of their story series came about. As an example she said they had such a response to the images and post about the Fantasyland construction they decided to expand on it. They now offer interviews and behind-the-scenes information and videos and plan to continue to do so. The best content comes from recording the things Disney is known for – making the magic – like they did for a family who lost a very important family item. Disney didn’t just return it, they gave it a story of its own. THAT is what makes great content.

One of the sponsors was Hewlett Packard so it was great to hear from Lori Lorenz, Senior Director of Direct Print Services, about some of the cool innovations they have implemented. I think one of the most noteworthy innovations is the TwoSmiles website. With the latest printer, not only do you have the ability to print things like crossword puzzles and coloring pages at the touch of a button it also allows you to print gift cards from home! No need to rush to the store to buy a last-minute gift.

There were door prizes offered throughout the day and I was excited to hear that I had won I personalized Etch-a-Sketch by PrincessEtch Jeanne Lebowitch. While Michelle Stepney, Content Director for Disney was offering tips for interviews and videos I was sitting down getting myself etched! Michelle provided great advice on not only preparing but being confident. When someone asked for tips on creating videos at home, she said one of the best tips is to use an iPhone to record the audio file. She said it’s a tool you probably already own and all you have to do is find a quiet place like the closet where there’s no outside noises and record what you want to overlay. She explained that little details like a professional and clear audio overlay make a huge difference in the quality of the video.

Next up, we were treated to a panel consisting of two prior winners of the Huggies Mom Inspired Program: Lily Winnail from Padalily and Alicia Overby from Baby Elephant Ears. Nick Weiland who runs the program shared details about this great opportunity for moms with inventions to get a little help. Not only are winners provided with financial assistance but they are also given resources and consultations with marketing and industry professionals. The application process is currently open so if you have a great idea to make lives easier for moms, be sure to check it out.

The final speaker of the day was Chicago’s very own Ramon De Leon. I had heard him speak a few years ago at Walt Disney World and he’s a very charismatic presenter. He offered some excellent advice about people relations.  As an example he said “care more about your customers than your competitors do.” Making people feel special, feel important and connecting with them is key to leaving a positive impression. It’s so obvious but it’s something too few brands incorporate in their procedures and training. 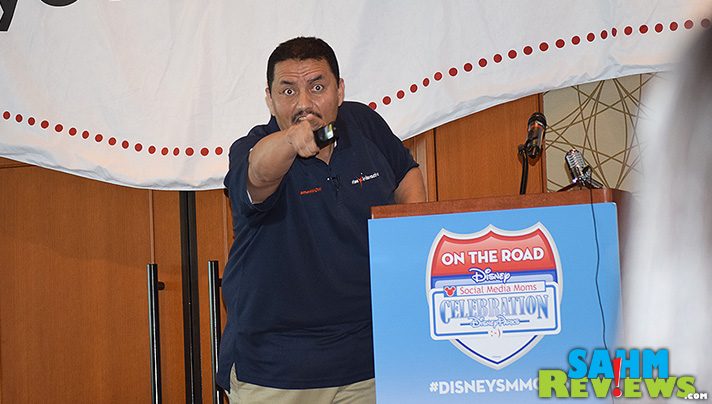 We had a little bit of time before leaving to get some photos, pin trade and network, including with the mouse himself! The day felt entirely too short and I would have been happy to stay even longer… it’s Disney, who wouldn’t? 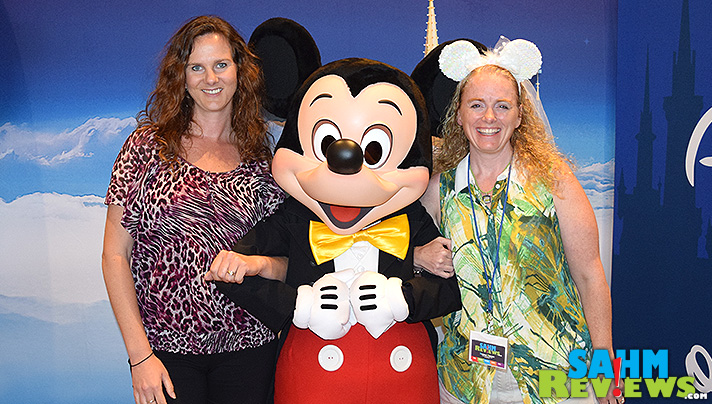 Many thanks to Disney, BSM Media and the sponsors for the exciting event.