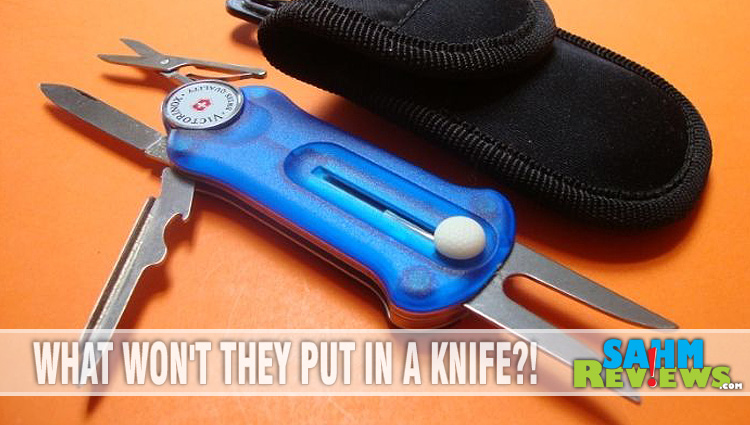 Something for the Hard-To-Shop-For Person

Growing up, I never knew what kind of gifts to get my dad.  Mugs, ties, whatever – I don’t even remember what kind of stuff we gave him. I’m sure my mom just picked something out and put our names on it.As we got older, my brothers and I pooled our money at Christmas and were able to get both my mom and dad something they each wanted.  One year, we got mom a Kitchen-Aid mixer and dad a turntable. Yeah, those things that played records. That’s the only gift that stands out in my memory. Even now, as an adult, I shrug when it comes time to get him a gift. He doesn’t NEED anything and seldom does he even say things that he might want. His favorite gifts include labor to help him build or fix something.

…and DH is not any easier.  I can’t buy him electronics because I’m never sure I’ll get the right configuration.  If it’s something for his car, then chances are he already purchased it.  Since his background in computer graphics makes him look at colors differently than I do, I don’t even try to shop for clothes for him.  (Actually, I usually have him pick stuff out for me!)  Garage?  Well, I’ve managed to get a few really awesome tools for him but that’s about it.

But generally, shopping for the men in my life is difficult.

When Family Review Network offered up the chance to do a product review for Executive Gift Shoppe, I spent about an hour surfing the site before finally throwing my name into the hat for consideration.  It wasn’t that I didn’t like anything – it was that I liked a lot of the stuff.  Both my Dad and DH are retired so they don’t have a need for anything for their offices.  They don’t smoke and when it comes to alcohol, DH doesn’t drink and my mom is in charge of all the wine-related stuff at their house. Despite the things they DON’T need, I was able to find a lot of things that they could put to good use.

I have a weakness for pocket knives and watches so I spent a LOT of time checking out the variety of pocket watches and Swiss Army knives they offer. But the goal wasn’t to get something that I liked – it was to find something for one of them.  As frustrated as I get trying to find something for these hard-to-shop-for men, I actually enjoyed surfing the gifts at Executive Gift Shoppe.

Ultimately, I landed on something that would work for either of them – a Golftool Swiss Army Knife.  My dad is a longtime golfer and golfs even more now that he’s retired.  DH just got a new set of TaylorMade clubs so he can take up the hobby as well.  I hadn’t decided who I would give it to but either way, it would make a perfect addition to someone’s golf bag. 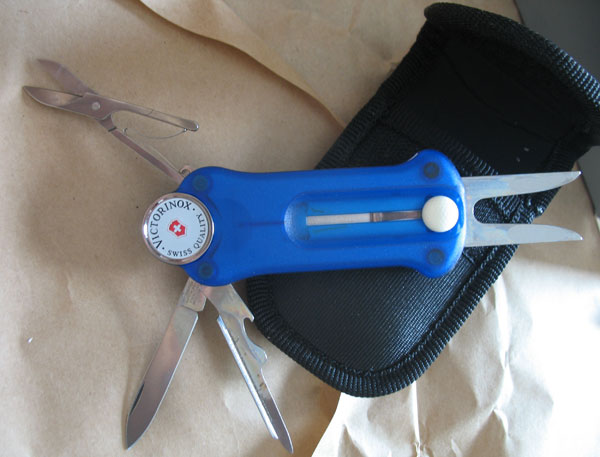 When the item arrived, I took it out and examined it.  I was pleased with how quickly it arrived and how carefully it was packaged. Just like when I sit in a new car (where I open every single compartment or hidden compartment I can find), I pulled the knife apart to see what it really contained.  The golf-related stuff included a divot repair kit, a ball marker and a tee punch/groove cleaner.  Of course, no Swiss Army anything is worth calling itself Swiss Army if it didn’t have a knife, scissors, toothpick and tweezers.  In addition, the tee punch/groove cleaner tool also has a built-in bottle opener.  Go figure. 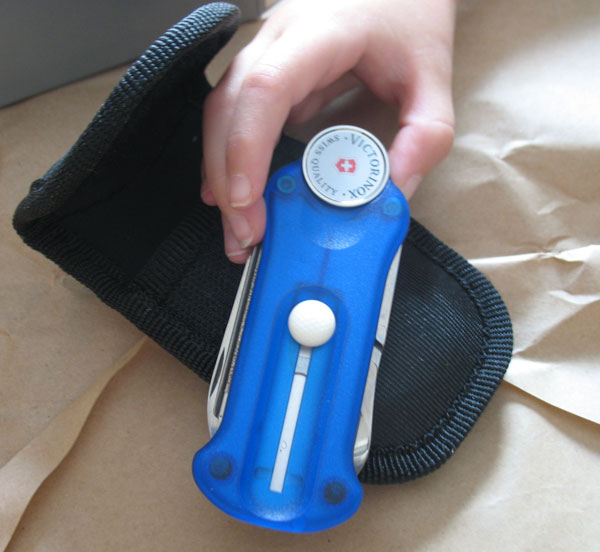 The Golftool Swiss Army Knife fits nicely in my hand and seems like it’s made well.  The tools are stainless but the casing is not – making it heavy duty without the weight.  The canvas case is padded and has a hook for attaching to the golf bag.

I spent a bit of time, err, playing with it then haphazardly replaced it in the case, divot repair side first, and handed it to DH for his opinion.  When he went to pull it out, he reached in and grabbed it but since the ball marker side was on top, it didn’t slide out. Instead, the ball marker by itself slid out.  Once we realized that there was a specific way to put it in the case, we made sure to put it in – ball-marker side first.

After that, hubby looked it over, messed around with the tools like I did then said it would make a nice addition to his new golf club set.  It was fun finding something that he didn’t have but still could use!

Executive Gift Shoppe has a lot of traditional and non-traditional gifts to help find something for the hard-to-shop-for person in your life.  Stop by their website to see what they have to offer or find them on Facebook and Twitter.

I shouldn’t have a problem finding something cool when the next occasion arises.  If I want to, I could even get them a trophy that says “World’s Best Dad.”