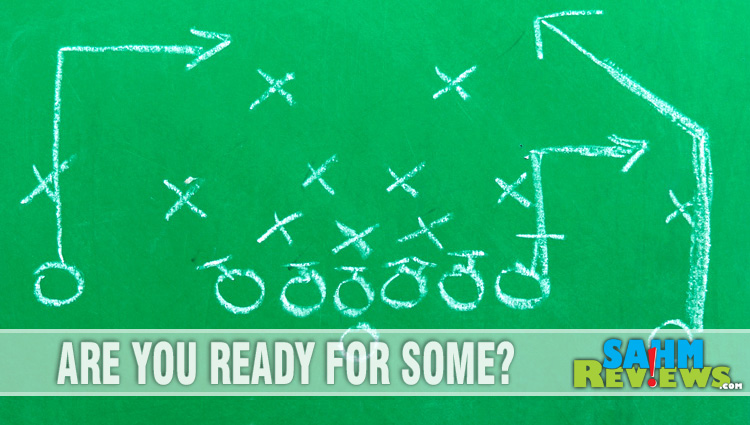 Girls Can Talk Football Too

Back in the early 90’s, DH and I collaborated with my oldest brother and started a fantasy football league for our friends. It was back when common folks like us accessed the internet via CompuServe, AOL and Prodigy. We even utilized a paid service for statistics and software because at the time, free stats weren’t available anywhere.I’m not sure what prompted us to start the league in the first place, but I have great memories of it. I recall how everyone met in the conference room at our office and we conference called the few friends who were out of town. We sifted through players and put together teams consisting of people from various teams. Until that point, I had pretty much been a Bears fan because they are the closest team to us. But with the advent of fantasy football, DH and I found that every game in the NFL had potential. We would spend each Sunday watching game after game, flipping channels and cheering for a variety of players. We wanted our quarterback to pass, but not tothat player because he was on our FFB opponent’s team.What I found myself doing is watching and talking about every game. I was able to hold my own in a conversation about any football game… at a time when women didn’t typically show any interest in the game except for one specific team. And men were always shocked when I would throw out stats about how many how many yards someone ran, how long the field goal was or how many sacks or fumbles transpired. Don’t get me wrong, I wasn’t a walking statistical dictionary of all the games… just the games involving my fantasy league team – and my opponent’s. I found the whole thing exhilarating.

Since my girls are at an age where we don’t want to spend every Sunday in front of the television, we aren’t currently participating in a league. However, we do keep up on football and still enjoy rooting for our former players (and the Bears, of course). As for the Super Bowl… well, what football fan would want to miss that? Doubt we’ll be able to watch the entire game, but that’s okay. It’s all about the Super Bowl experience anyhow.

And that experience means something different to everyone. For some, it means hitting the local sports bar to enjoy the game in good (and opposing) company. For others, it means hunkering down on the couch with family and friends. Then there’s the group that puts together the full snack spread and invites friends over. If you’re one of those people who plans to make it an big event then I hope your shopping is already done. If you’re up late planning and doing a morning run for groceries and supplies, then pop over to Walmart’s Game Time website. There, you’ll find recipes, snack ideas and even printable shopping lists for entertaining from as few as two to as many as 100. And heaven forbid that you haven’t picked up the new TV for the game, Walmart has deals on those, too…right on the game time website. Walmart also boasts “Game Time Snacks for Eight for as low as $44”.

Live football not enough for you? Counting down the days until the release of Madden NFL 11 so you can get your NFL fix during the off season? Doritos and Madden NFL 11 have teamed up to offer a $20 Walmart eGift Card when you preorder your copy at Walmart.com.

No matter how you look at it, Walmart is a great place to stretch your dollar whether it be for the big game, a holiday or just everyday shopping.

As a frequent shopper of Walmart, I’m excited to be able to spread the word about the great deals that they offer. As part of this promotion, brought to you by Walmart, I have a gift card to give to one of my lucky readers. Want to hear more? Keep reading… (giveaway closed)

Participants –
…must provide a US shipping address
…must provide an email in the first comment, email me directly with an email address or have email accessible from their profile.
Sometime on February 17, 2010, a winner will be chosen at random (using random.org) from all valid comments left. Winner has 72 hours from posting/notification to respond. If winner cannot be contacted, I will move on to the next random selection.
How to enter:
For the first entry (required) –
(1) Get your game face ready at Walmart.com.
(2) Leave a comment on this post at SahmReviews.com with which Walmart appetizer, snack or, uh-hmmm, beverage is an absolute must-have at your Super Bowl event. (Edit 2/8: Since the Game-Day website is no longer available, please stop by the Valentine’s section and comment on something interesting you found there.)If you want to increase your chances of winning, here are some options to earn additional entries –
— Three Entries: If you have a blog or website, add my button to your page. (Here’s the code:)

— Two Entries: Publish a blog post regarding this contest by February 10th and link back to it.
— One Entry (Daily): Follow me on Twitter and Tweet this contest by clicking here or copying the following text:
“Giveaway for a $50 Walmart Gift Card http://tinyurl.com/ydyhtue @SahmReviews Please RT #giveaway”. Comment with a link to your tweet.
— One Entry: Become a fan of SAHM Reviews on Facebook. Of course, don’t forget to leave a comment.
— One Entry: Subscribe to my feed via RSS or email.
— One Entry: Follow me using Google’s Friend Connect feature.
— One Entry (Daily): Read any of my non-giveaway reviews here at SahmReviews.com and leave an appropriate comment on that post. Come back here and leave a comment stating which product/post you left a comment on.

287 comments on «Girls Can Talk Football Too»