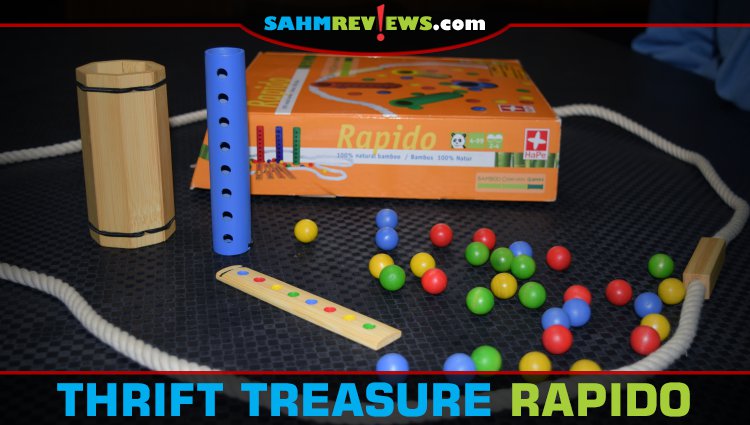 We normally pass on educational games while shopping at thrift. Most of them tend to weigh more on the education rather than the game. And that usually means no fun. It’s a fine balance to offer a game which is both entertaining and informative and very few companies can accomplish the task.

We’ve had great luck with wooden games by HABA, both at retail and thrift. When we spotted Rapido by HaPe at our local Stuff Etc. thrift store, we immediately began comparing it to the line of yellow-box games by the previously mentioned German company. This game was a bit different. It touted the use of bamboo, an easily replaced natural material instead of solid woods used by others. The box description reminded us of the game Dr. Eureka, so it was worth a couple bucks to see how it compared.

Rapido does have a couple of similarities to Dr. Eureka. Both use a type of tube, and each requires you to line up colored balls/marbles in a particular order. After that, they’re quite different games. Set up for a game of Rapido by placing the included rope in a circle in the middle of the play area. A large bamboo cylinder is placed in the center of the circle and filled with all thirty-two wooden marbles. Each player is given their own small tube with a rubber band attached at one end and a bamboo strip with colored circles. There are two sets of strips, an easy and a hard version. Mix and match according to the age of the player.

To start the game, one player lifts the cylinder inside the rope and releases all the balls inside. Everyone is racing at the same time to fill their personal tube with marbles in the same order as shown on their bamboo strip. Starting from the color furthest from the black line, place the tube over a marble of that color, rubber band side down. The marble will slide up into the tube and remain there, held by the band.

Once a player has their tube filled with eight marbles, they check the order against their strip by viewing the marbles through the side of the tube. If incorrect, all marbles must be dumped back out, and the player must start from the beginning. If correct, they are the winner of Rapido!

A couple of things we noticed. The game is advertised for ages 4-99. While it certainly can be played by that age range, this is primarily a game for young children. Teens and adults will not be engaged enough to play more than once, unless they are playing along with a younger family member. Additionally, the game is claimed to last 15-30 minutes. This must be a typo as a typical one-round game is over in 15 seconds! Even at the youngest recommended age, most kids could complete the challenge in under 30 seconds.

Rapido is no longer in production, but you can find a few gently used examples on eBay. It is worth waiting to find one at thrift for a dollar or two unless your preschooler is dying to play. Only then would it be justified to pay $20 online.

Do you find educational games to also be fun?