You know how people think Facebook and Google are listening to everything we do? I must admit, I’ve seen ads in my timeline for items I’ve never searched for and only discussed with Nicole in person. It does make one wonder about how our information is being shared and whether my Amazon Alexa is secretly spying on us.

Seemingly random, my YouTube suggested video feed began including clips from Family Feud a couple of weeks ago. I haven’t watched the show in a LONG time and have never been a Steve Harvey fan, but these official videos were hilarious. Steve has a quick wit and charming nature that had me watching more than one video late into the night. Imagine my surprise when we found a copy of Family Feud Strikeout at our local Goodwill this week. Is Goodwill purchasing my data from YouTube? (sarcasm) 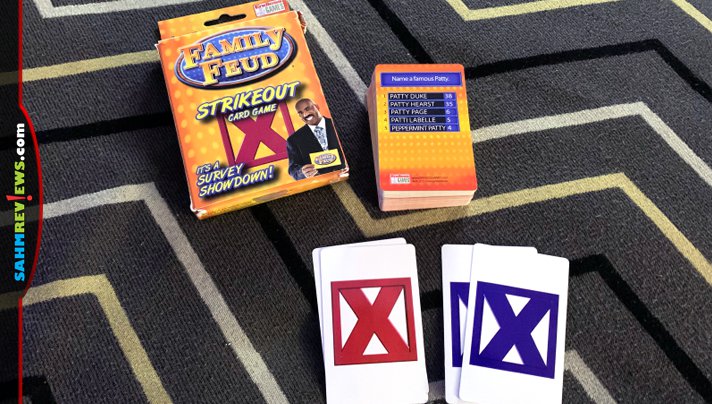 Now I will usually pass on incomplete games, especially if the rules aren’t present. However, I knew that because Family Feud Strikeout was published by Endless Games, replacement instructions would be available on their website. The full set of Survey Cards wasn’t present either, but that would not affect game play. So, for only $1.88 we gave in and brought it home.

Playing Family Feud Strikeout is much like the TV version. One person is chosen as the MC and will be responsible for reading out cards and its answers. To begin a round, one of the two-sided cards are drawn and its question read aloud. A “Face Off” occurs between a member of each team, with the person calling out the highest-ranked answer earning the first turn for their team. 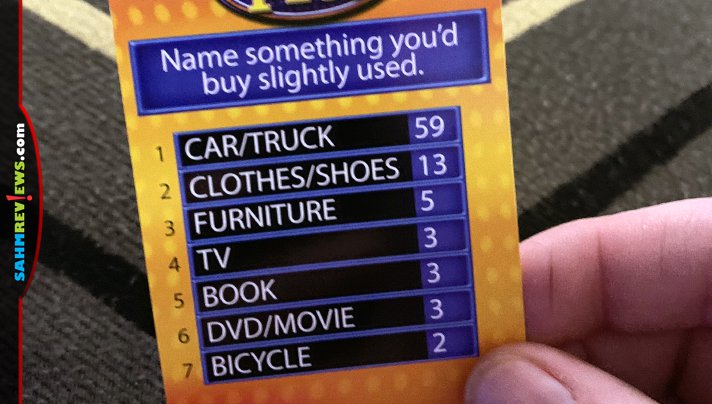 Here’s the difference: instead of one team running through all the answers, teams take turns trying to guess one of the responses. If the other team earns three strikes or if your team can provide the final remaining answer on the card, your team wins that card. The object of Family Feud Strikeout is to be the first team to earn four cards!

This quick card game is recommended for ages 10+ and requires a minimum of three players. We may have saved a little bit of money by buying Family Feud Strikeout at thrift, but it is still available new on Amazon for well under $10! Survey says, “That’s a deal!”

Are you a fan of Family Feud? Who was/is your favorite host?