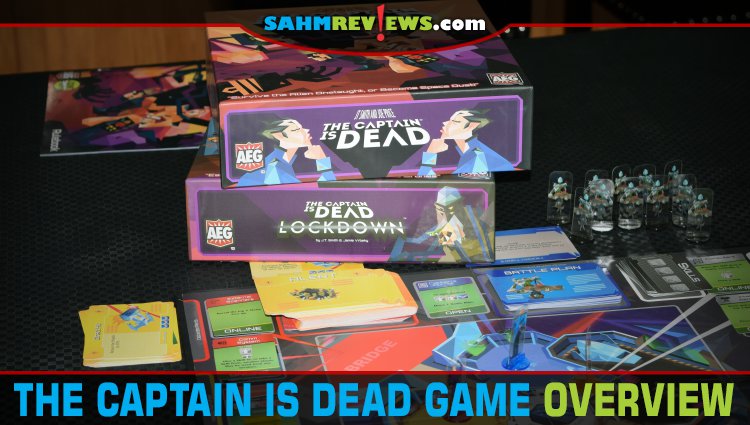 Things in life aren’t always bright and cheery, but I pride myself in trying to find the good in every situation. While many people have complained about the disruption caused by COVID (which I cannot disagree with), the stay-at-home mandates have allowed families more time together. That means more dinners together. More conversations. More playing new board games or assembling puzzles. More family bonding. More togetherness. Period. Well, at least the opportunity to take advantage of those things with their personal time at home if they so choose. Professionally, I’ve watched as businesses shifted their marketing and online presence to accommodate the new normal and have incorporated services like curbside pickup and delivery, Facebook live interviews and seminars and so much more prominent as well. I’m sure everyone has experienced something new whether it’s online learning, curbside pickup, playing games via teleconference or have learned a new hobby or craft (like painting miniatures or making fan art). The board game industry is adapting as well. Under normal conditions, we would be traveling to conferences right now promoting the release of Hues and Cues. While we are sad that we’re missing out, the bright side is that we’re seeing more digital content and live plays than we otherwise would have. In addition, we’re seeing game designers and publishers releasing print and play games and tabletop variations of their hottest titles. We heard that Thunderbox Entertainment was releasing The Captain is Dead on Steam so naturally we wanted to play the physical copy from Alderac Entertainment Group!

The Captain is Dead is a cooperative game where the captain is dead (duh) and you’re trying to repair your ship in order to jump out of danger. Unfortunately, you’ll constantly be dealing with command modules breaking down and aliens attacking. To set up the game, place the board in the center of the table. You’ll need to sort the various cards by type and add them to their specific parts of the board. Randomly hand out a color piece to each player then give them the related character cards. They’ll select one character from the group and return the others to the box. Alert cards are shuffled by color and placed in a stack with yellow on the top, orange below those and red on the bottom. This is basically the game’s timer. You’ll shuffle the Skills cards as well then distribute five to each player, place three next to the Internal Sensors slot of the board then stack the remainder on their designated spot on the board. Status bars are added to the Jump Core (varies based on difficulty) and Shields field (100%). 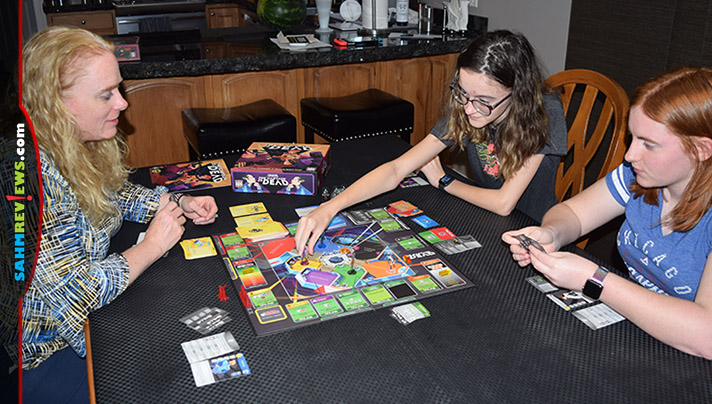 When you begin the game, you’ll seed the board with breakdowns in the same way that you pre-populate infections for a game of Pandemic. This randomized setup of broken ship components ensures that each game is different right from the first turn. Giving players options from an assortment of characters also provides longevity to the game. 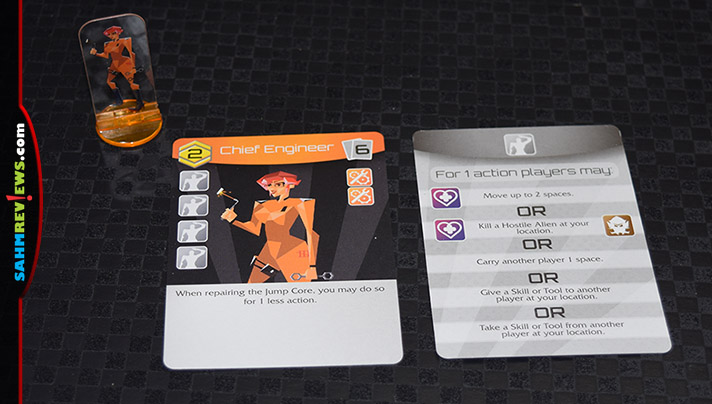 Each character card displays a set number of available actions, the hand limit, abilities, discounts and rank. The rank is what determines the turn order for the game. On your turn, you’ll use up to your allowed number of actions to complete tasks including removing aliens, repairing components or raising the jump core. That last one is pretty important as it’s what you’ll need to do to win the game! If you’re injured then you’ll have limited action options until you’ve healed. 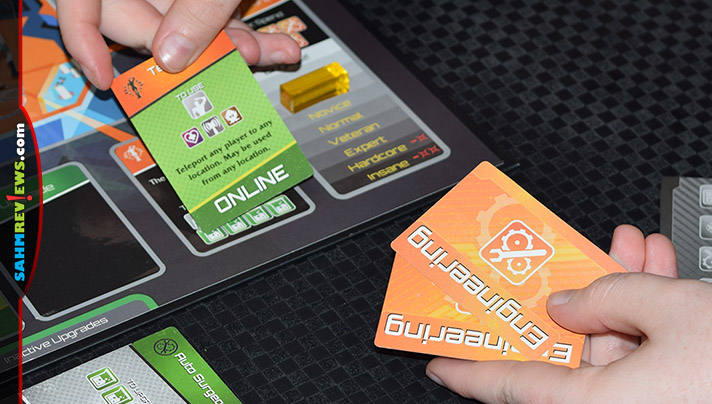 Skills are required to make repairs, improvements and take certain actions. Each character has built-in knowledge (skills) that can be used over and over. However, everything else needs to be acquired or repaired using skill cards. Since players have different hand limits, communicating with crewmates on what tasks they can take on is important. You may need to meet up and exchange skill cards in order to complete your objectives.

Tools, system upgrades and battle plans allow you to be more efficient. Upgrades may allow all players to take an extra action or reduce the number of aliens that board the ship. Tools let you use less cards to repair or install a system or kill all aliens at a given location. Battle Plan cards are one time use but are very powerful by giving discounts on actions or repair systems for free. 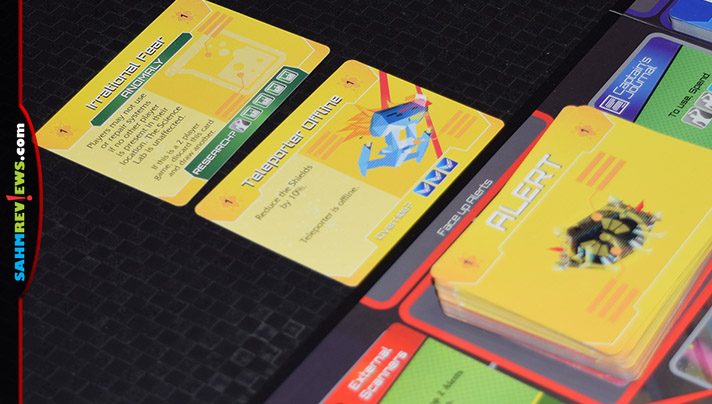 At the end of your turn, you’ll draw an alert card and may have the option to use skills to override it. If you are unable to prevent the alert, it takes effect immediately. One of the ship’s systems is a scanner that lets you see what alerts are coming next so use this knowledge to plan accordingly!

If you’re able to raise the Jump Core to the “Engage” status, you escape from the incoming aliens and win. If shields drop to 0%, you run out of hostile characters to place or get to the Red Alerts then you’ll lose. The Captain is Dead feels like you’re constantly trying to bail a leaky boat, so you need to stay focused on the goal if you want to win. 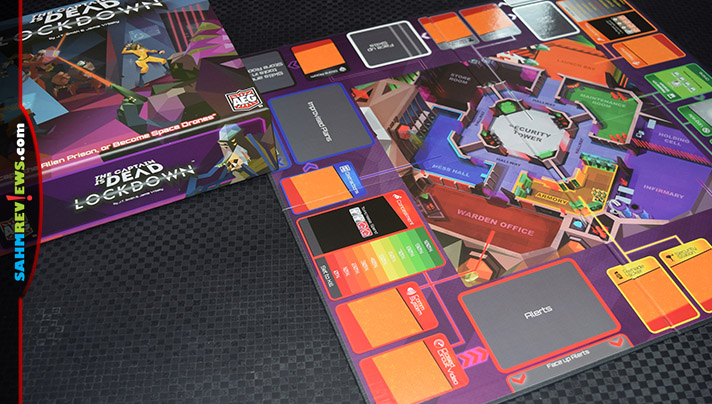 Once you’ve mastered the game, follow it up with The Captain is Dead: Lockdown, the sequel to the original. The overall game is played the same, but the theme is a continuation of the story from the first. In Lockdown, you’ve repaired the Jump Core and escaped, but the haphazard repairs broke down a few systems away. Aliens took the crew prisoner and your goal is to steal an alien ship and escape. The Captain is Dead: Lockdown incorporates new features including the potential for your character to be eliminated!

Pick up a copy of The Captain is Dead and Lockdown on Amazon, direct from Alderac Entertainment Group or as for it at your local game store. Be sure to transport yourself to Facebook and Twitter to lock down the details on other upcoming releases from AEG including the third game in this series. There’s also a lot of buzz surrounding their recent Santa Monica game so be sure to check it out also!