About that list you’ve been working on… You know, the one with games that you want to purchase? You’ve been working on it for the last couple of days by using our list of the best games debuting for sale at Gen Con Part 1 and Part 2. Well this is the final act in the trilogy as we showcase the games from publishers in the second half of the alphabet.

You’re running out of time to get the list done so I’m going to leave you right here to do your research! 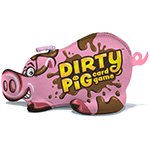 In Dirty Pig, first released as Drecksau, each player has 3-5 clean pigs in front of him and three cards in hand. Each turn one card is played. By playing a “Dirty Your Pig” card, one pig can be sent into the mud. One of the pig cards in front of you is flipped over to show a dirty pig on the back. Rain cards clean all pigs, even your own! Barn cards protect your pigs from the rain, while lightning cards destroy the barns – but lightning rod cards protect barns from lightning cards. Farmer cards are played to dirty someone else’s pigs: the farmer likes clean pigs… Pigs in a barn that are protected with a barn door are safe from the farmer. A pig in a barn, with a door, and a lightning rod, is completely protected! The first player who dirties all of his pigs wins! 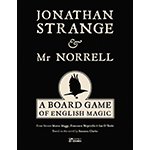 After centuries of absence, magic has returned to England, but not all are using it for good…

Take on the role of an aspiring magician and start your journey down the path to greatness. Collect rare books, flit between social engagements, and impress your peers with feats of magic. Be careful to strike a balance between your studies and your status, for the gentleman with the thistle-down hair has plans of his own, and it will take all of your strength to stop him.

In Jonathan Strange & Mr Norrell: A Board Game of English Magic, players take on the role of four principle characters from the novel — Jonathan Strange, Mr. Norrell, Miss Redruth, or John Segundus — and travel around England and Europe, attending social engagements and performing feats of magic in the hope of becoming the most celebrated magician of the age. 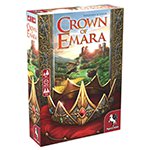 Crown of Emara is an optimization game for core gamers. As aspiring heirs to the thrones, players try to increase the happiness of the people in the fantastical land of Emara. At the same time, they have to build new houses. To do so, they combine action cards with worker movement actions. Whoever finds the best balance between happiness and housing construction will become new king of Emara. 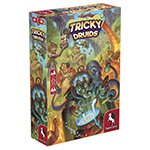 Tricky Druids is a family game about brewing potions and gift-giving for extraordinarily nice people. Each turn, players will roll custom dice to determine the ingredients they collect this round. Then they have to choose some of the ingredients and give them to another player as a present. Only if the other players kindly decline the gift, the active player may use them for their own potion! 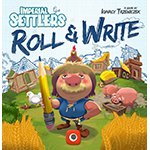 Imperial Settlers: Roll & Write is a standalone game set in the universe of Imperial Settlers and Imperial Settlers: Empires of the North. The game is heavily focused on engine building! Constructing buildings grants you a special bonus, and with each passing turn the game offers you more choices as your empire gains momentum. 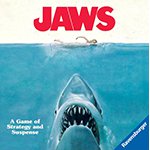 In JAWS, one player takes on the role of the killer shark off Amity Island, while the other 1-3 players take on the roles of Brody, Hooper and Quint to hunt the shark. Character and event cards define player abilities and create game actions for humans and the shark. Gameplay is divided into two acts — Amity Island and The Orca — played on a double-sided board to replicate the film’s story.

Welcome to the most popular bubble tea shop in Taiwan where you’ll find drinks flavored like rich milk tea with a chewy texture and unforgettable good taste!

To make an unforgettable bubble tea, you need to pay attention to crucial elements like having more bubbles and less sugar; even your method for adding ice will make the drink taste differently. Sounds good, right? If you can’t wait to make your own, let us shake it!

In Bubble Tea, each player has two cards called cups and nine bubble tea ingredient cards. One player uses the shaker to shake out which ingredients will be needed this game, and whoever assembles these ingredients the quickest wins the game and gets the rewards! 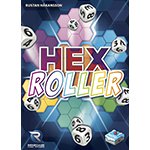 HexRoller is a roll-and-write game in which each round players draft two of the dice rolled, then fill in spaces on a hexagonal grid, attempting to both complete regions and create lines of identical numbers in order to maximize their score. Who can use their bonuses at the right time to zoom into the lead?

“Without teamwork, you will never survive. Without betrayal, you’ll never win.” One of the seminal Semi-Coop games is back with a complete reboot, enhancing the game experience in significant ways. In this game of kill-stealing, you decide whether to swing for a whopping 50 points of damage – or hold back, awaiting a more opportune time to strike. Only the final blow matters if you are to score the kill. Hold back or sabotage other’s plans too much – and the entire party will die, without a winner.

The Menace Among Us 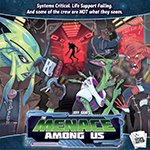 The Menace Among Us is a thrilling semi-cooperative game of intrigue and survival in deep space. Adrift and powerless, your crippled vessel is bleeding oxygen. As you effect repairs, every breath you take brings you one step closer to death. You must work together to restore power before the air runs out… but hidden among you, as loyal friends and crewmembers, are imposters who have infiltrated security and continue to sabotage the ship. Their only goal is to avoid detection and kill the crew, by force or by asphyxiation. Can you identify them in time and eliminate the threat? Or will succumb to The Menace Among US? 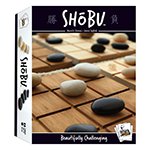 SHOBU is a beautifully crafted abstract strategy game for 2 players. The game features 4 square wood boards (2 of each color) and 16 natural river stones.
First, a player may move one of their stones up to two spaces in any direction, including diagonally. Second, they take a more aggressive move, which must be the same direction and number of spaces as the first move. It is this second move that allows you to push stones across the board – or off the board’s edge. Remove all four of your opponent’s stones from just one of the four boards to win. 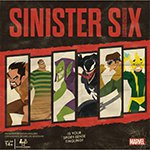 Ten of Spider-Man’s most sinister villains have come together in Sinister Six to form the ultimate team for a series of heists. Contribute your evil services to pull off the heist, or betray the others by snatching loot ahead of schedule. Make sure you’re prepared for the massive final heist because if you get captured by Spider-Man in the last round, it’s an instant loss for you! 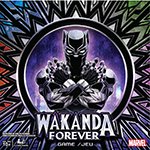 When will you take the throne?

A slew of villains threaten Wakanda! As the five tribes of Wakanda, battle together to keep the country safe. Leading the fight is the King of Wakanda and ultimate warrior, the Black Panther, who alone earns more points than the other four tribes — but you want the throne for yourself, so time your moves carefully, challenge for the throne when the moment is right, and take the mantle of Black Panther! Win the game with the most points and cement your legacy as the Black Panther.

In Wakanda Forever, each tribe has a bonus power to begin the game, and additional powers are earned by whoever holds the Black Panther title when a villain is defeated. Choose to use your valuable Vibranium to upgrade your tech with the chance to score more points, or save it to enter a one-on-one ceremonial battle for the throne. 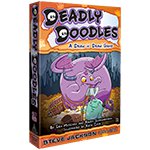 In Deadly Doodles, 1-4 players simultaneously draw paths through a dangerous dungeon. Draw cards, draw a path through your dungeon, and rack up points! Collect loot and fight monsters…or run away screaming! Can you defeat the dragon for the big score?

In Dizzle, players want to fill their scorecards with dice collected each round. Players take turns selecting dice from the center of the table, and the next die they collect must match the others. At the end of a round, mark all boxes on your scorecard filled with dice. 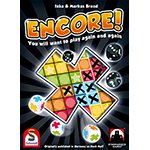 In Encore!, first published as Noch mal!, the dice determine which color and how many spaces you can mark off on your playing sheet — but the starting player may first evaluate what everyone’s doing, then remove two dice, leaving everyone else to make their choices with the dice that remain. 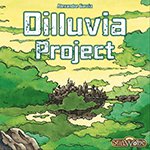 The first sky city was planned and named Dilluvia Project. Will it succeed, will it attract people living detached from their friends in the skies?

It is an important time for mankind!

The players are entrepreneurs managing the construction of this first sky-city. During seven game turns the main goal of the players is to attract new inhabitants to the city. Who is building the city most efficiently, who is attracting the most population and winning Dilluvia Project? 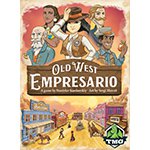 The journey out west was daunting and fraught with peril, but you made it! And now you’ve been granted land to take responsibility for new settlers.

In Old West Empresario, you take on the role of an empresario, building a prosperous town in newly settled western territories. Attract settlers through clever dice drafting and tile placement. Build the most valuable town with the most population to become the state capital! 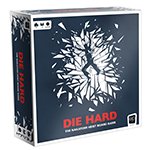 Die Hard: The Nakatomi Heist Board Game is a one-versus-many game of stealth, combat, and action-tactics. Players will square off with a deck of cards and a map of Nakatomi Plaza between them. Three acts worth of goals will move them through the story of the original Die Hard film. The thieves must work together efficiently and signal each other effectively to hack through the vault’s locks and stop John McClane. McClane must plot his path and manage his cards carefully to fight his way through and kill Gruber. 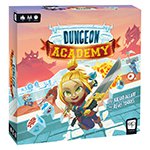 Roll & write your way through the Dungeon to graduate from the most prestigious academy. Play as young students battling monsters, collecting potions and loot to obtain glory points. Players simultaneously enter in different levels of the dungeon to clear rooms as quickly as possible. The more monsters you defeat to closer you are to earning your diploma. Make sure to have enough Mana and Health to escape all 4 levels of the Dungeon before the time is up! 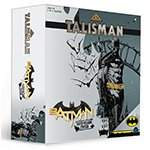 Sneak, fight and search your way to victory in this reimagined version of Talisman. With sights set on a villain and multiple obstacles ahead, players navigate through Arkham Asylum to evade orderlies, officers, and Batman, Robin, and Batgirl to release the inmates and become King or Queen of the underworld. 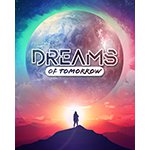 Dreams of Tomorrow is a competitive set collection game for 1-6 players that plays in 45 minutes about weaving dreams, manipulating action spaces, and careful timing of abilities.

If you can’t find a game or two (or twenty) that you want to locate while at Gen Con then I’ll be surprised. There’s a great variety of themes, game mechanics and difficulty levels. Stay tuned in a couple days for an article we’re going to share that includes promos that you can track down too!