I’ve mentioned a few times before that I spent all of 4th through 7th grade (and part of 8th) living in West Germany. My parents were stationed there in the 70’s/80’s as government-employed civilians and my brother and I, of course, were along for the ride. We took every advantage of living in Europe that we could by traveling on weekends with the family and on week-long school-sponsored field trips to historical locations throughout West Germany and other countries!

One of our more memorable family trips was when we took the train across the country and into what used to be East Germany, on our way to West Berlin. This was a time when the Iron Curtain was in full force and we weren’t even allowed to look out the windows as we passed through the communist-controlled country. It was a very scary prospect for a 12yr old to know the train could be boarded and inspected at any time.

I was reminded of the Cold War when we were playing Jolly Roger Games‘/Ultra Pro Entertainment‘s Iron Curtain recently. A quick 30-minute card game for two players, Iron Curtain lightly simulates the balance of power present between the US and the Soviet Union during the USSR’s existence and how it was affected by other countries. 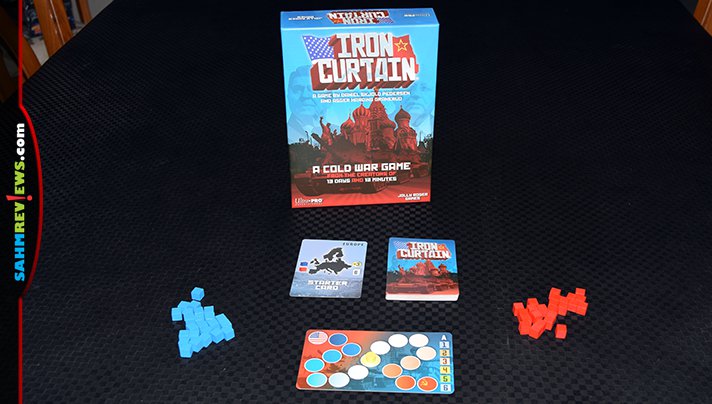 The box includes only 20 cards, one of which is a starter card and another a scoring card. The other 18 are strategy cards (10 US and 8 USSR) depicting other associated countries. A yellow scoring marker is placed in the center of the scoring card, each player (one US and one USSR) receives 24 colored influence cubes of their color,  the strategy cards are shuffled together and five are dealt to each participant. The remaining eight cards are set face-down off to the side to be used later. 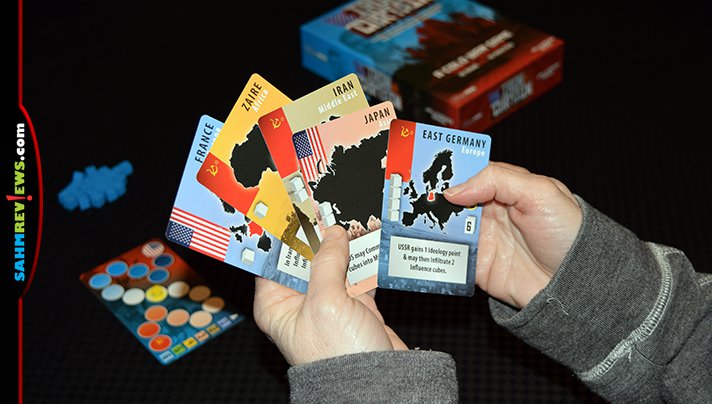 A game of Iron Curtain is played over two rounds, each consisting of four turns. On a turn you have only one thing to do – play a card from your hand. Turn it face-up on the table and place it orthogonally adjacent to another card of the matching color (or in any position if you are playing the first of that particular color) to maintain “regions” (allies). Then you check the board for regional scoring. This happens when you play the last card of a particular color to the table (the number of cards of that color is printed on the right side of the card’s face). 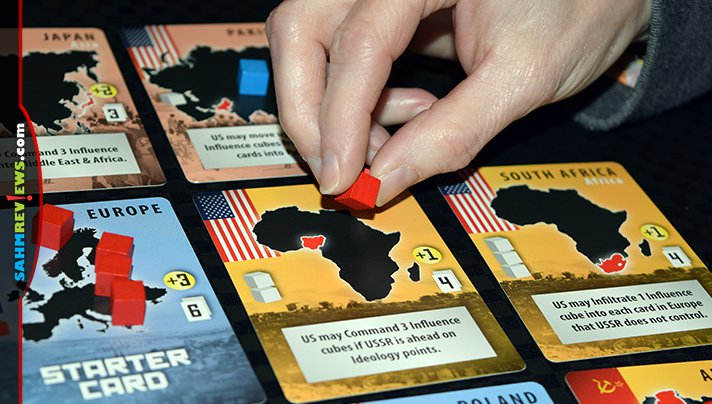 Your goal is to dominate face-up cards on the table. You do so by placing more influence cubes on the cards than your opponent. For each card you control in a region at the time of scoring, you will gain one ideology point (victory point). The scoring marker is moved one space towards your side. The player who controls the most cards in a region when it scores receives additional points equal to the region’s bonus value (also printed on the right side of the card’s face)! 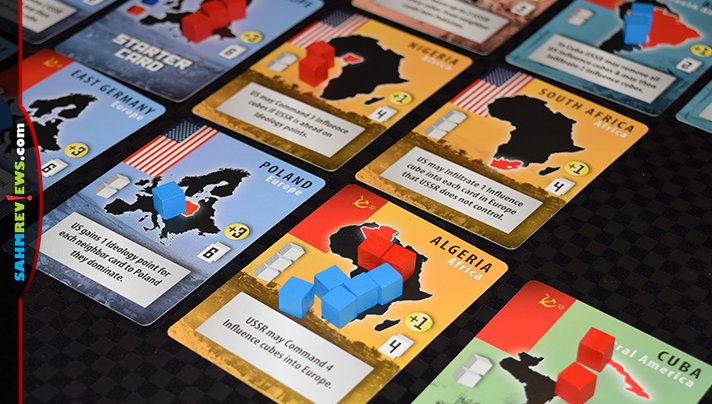 After checking and/or scoring the region, actions take place. If the card you played was of your alignment (US or USSR), then you may choose to either take the event action printed on the card or add influence cubes to the board via a command action. Event actions are different on each card and also may allow for cubes to be played or even award additional (and immediate) victory points. Command actions are shown on the left side of the card and allow you to place that many cubes onto played cards that you either already influence or are adjacent to one which you do. You can also take absolute control of a card by having two more cubes on a card than your opponent, requiring them to spend an extra cube to place one to that card. 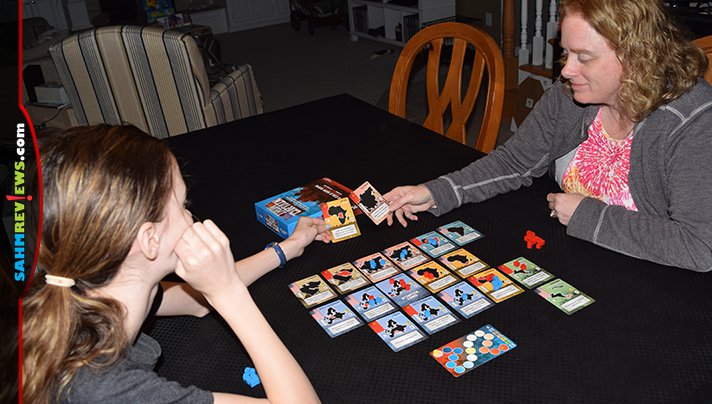 After four turns, the fifth card in your hand is set to the center of the table to be used for end-game aftermath scoring. The other eight cards are then dealt out to the players and a second identical round is played. At any time during the game, if either player is able to move the scoring token all the way to the end of the track (onto their flag), the game ends immediately with that player winning. If the game proceeds all the way to the end without one side having a clear victory, some final points are awarded. 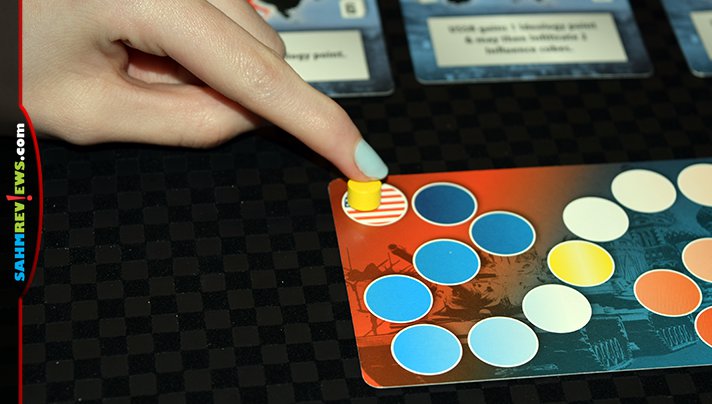 The two aftermath cards saved from the first round are revealed and the influence cubes listed in the event section are tallied, with the side having the most receiving the difference in ideology points. Any unscored regions are now tallied, even if not complete (because one or more of that region’s cards were in the aftermath pile). The player with the most overall points wins, with ties being awarded to the US!

While the theme from the Soviet era may not hold much water with younger players, Iron Curtain may be a good game choice to start the conversation about modern history and how the Soviet Union impacted today’s countries. You will find copies on Amazon for under $20 or at your favorite local game store. As always, be sure you to check out the publisher’s website (and follow them on Facebook or Twitter) to see what they’re working on next!

What do you remember about the Cold War?