I was at the neighbor’s house recently while her college-bound daughter was home on a weekend break from her summer internship. As I chatted with her mom and dad, she was hard at work making some fancy salad to package in individual storage dishes to take back with her. It made me laugh because when I was in college, a standard meal was Ramen, prepared in a hot pot.

Flash forward to today and kids are developing a very different palate. Our girls will make those 20¢ Ramen packs sometimes, but they’ve graduated to the expensive ones that come in the freezer section. Maybe it’s because social media is filled with photos of deliciousness. Or maybe parents are to blame as we introduce our kids to a variety of foods and even go so far as teach them to make sushi at home. Perhaps it’s because there are a ton of kitchen tools and gadgets that make preparing things easier. Case in point: the countertop pressure cooker craze. Let me start by saying that I’m not one to jump on bandwagons. So when everyone and their brother insisted on purchasing one of the devices a couple years ago, I sat on my hands (and my checkbook) and quietly voiced my dissent. As recently as a couple days ago, I had a friend say she purchased one a couple years ago and has yet to use it. Yet here I am, getting ready to tell you about the Mealthy MultiPot 9-in-1 Programmable Pressure Cooker I now own. But in my own defense, it’s because, okay, I don’t have a defense. I just like kitchen gadgets.

I was skeptical about how it would work and whether I would manage to blow up the house with it. I decided to start with something simple: hard boiled eggs. With Kennedy running about 5 miles per day in cross country, we’re trying to keep healthy proteins on hand for her to snack and eggs are one of those. Instead of standing over the stovetop keeping watch of them, now I simply pop them into the Mealthy MultiPot for about 5 minutes, let them rest for another 5 then give them an ice bath for another 5. I can’t remember the last time I had a hard boiled egg that peeled so easily. Now it was time to try out the recipe I was craving: ramen. 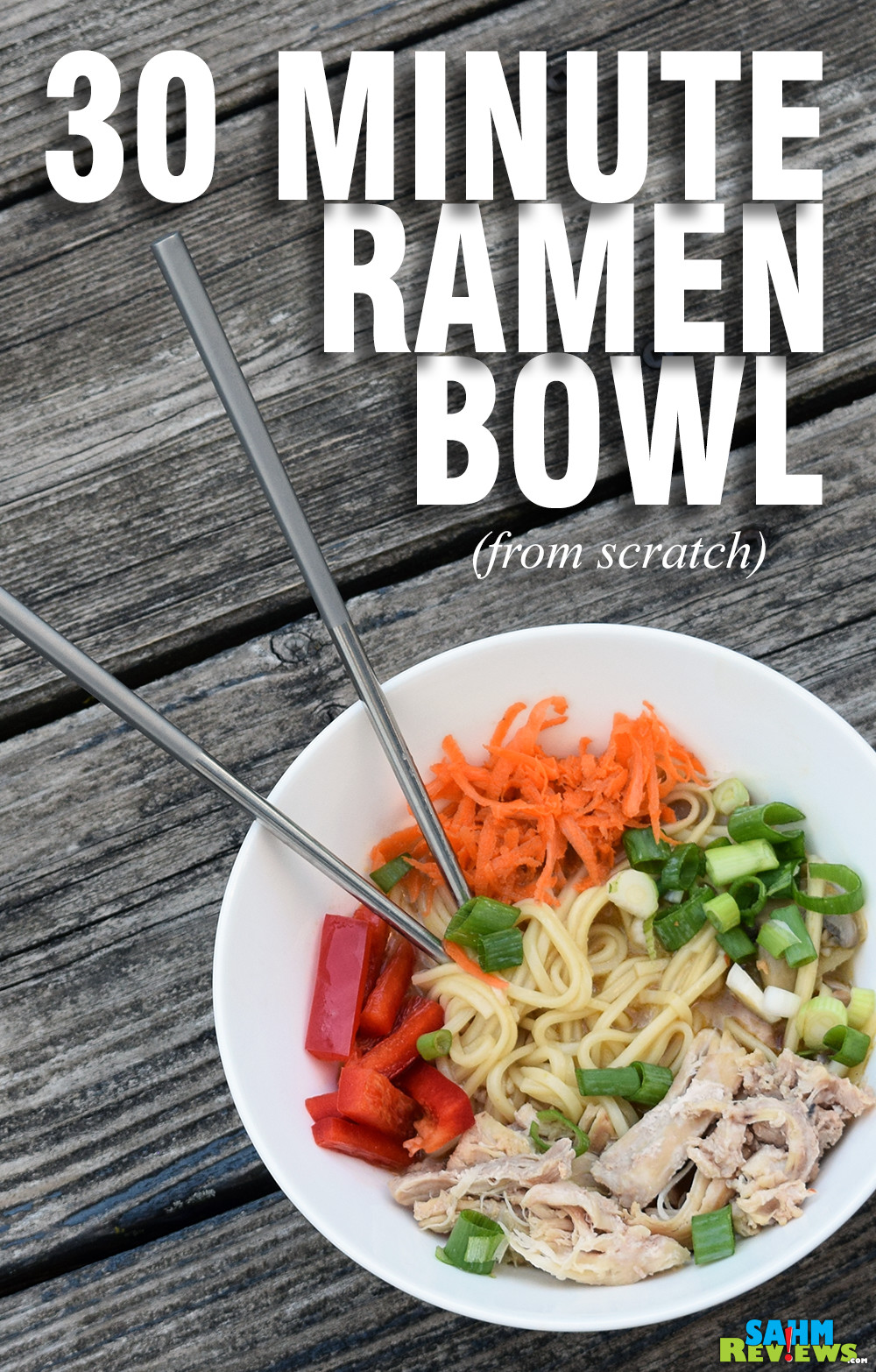 After surveying several websites for timing and ideas as well as checking out the Mealthy app that offered recipes and tips, I found a couple that I could use as the basis for my recipe. Want to know how it turned out? Amazing. I had a few changes I needed to make but it’s a solid winner and one that everyone in our family agreed we should have again. Time from start to finish was around half an hour. 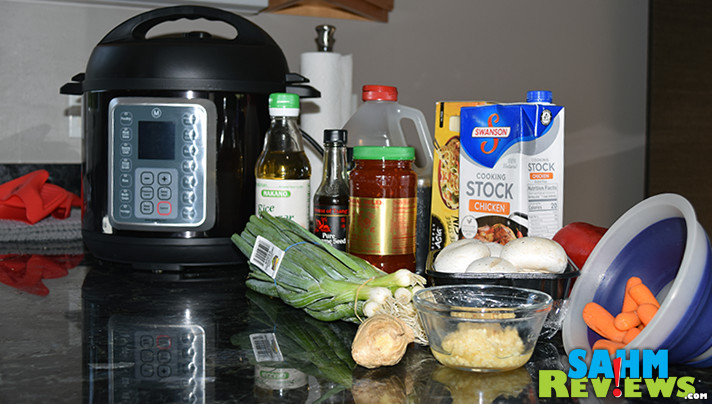 Have all your ingredients (up to the carrots) sliced, measured and ready to go before you start. 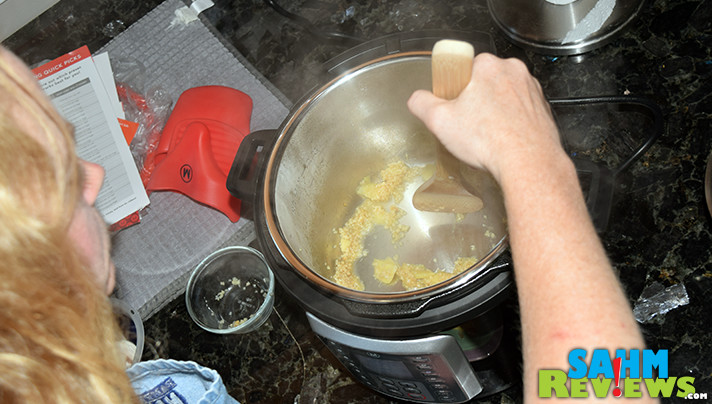 Using the saute setting on the MultiPot, heat the sesame oil then stir in the ginger and garlic. Word of caution that it gets very hot and you’ll want to stir it quite a bit to make sure it doesn’t burn. As soon as it starts to get aromatic, add the whole chicken thighs. Stir them to coat with the garlic/ginger mixture. Once they’ve started to leave a residue on the bottom, add the mushrooms, stock, water, soy sauce, rice vinegar and chili paste. Use a wooden spoon to scrape those tasty bits off the bottom of the pot.

Cover the pot with the lid, lock then turn the vent to Sealing. Cook for 25 minutes on the Soup/Broth setting. While it is cooking, prepare the carrots, green onions and bell pepper (or corn). We used red bell peppers but all agreed that corn would be a good, crunchy alternative.

When the timer goes off, carefully release the pressure then remove the lid. Transfer large chicken pieces to a cutting board. Add noodles to the stock mixture, making sure they’re separated well and covered with liquid. Lock lid, set to Sealing then start the Pressure cook setting for 3 minutes on High. While you’re waiting, use a fork to shred the chicken. 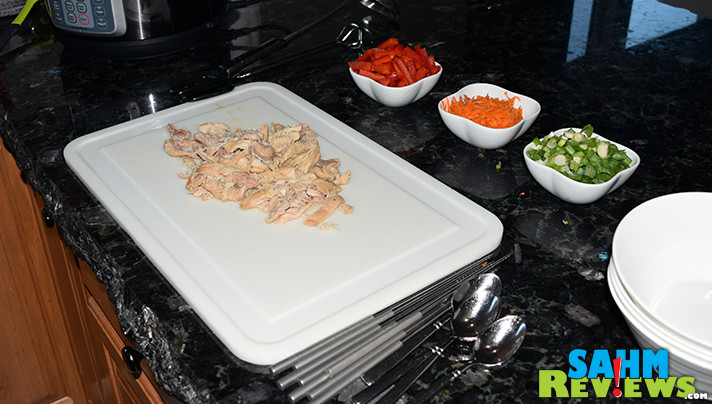 When the timer goes off again, dish the noodles into bowls, top with chicken, carrots, green onions and bell pepper/corn. Ladle your desired amount of broth mixture over the top then enjoy!

*Notes regarding our preparation: We couldn’t find Ramen noodles at our store so we improvised with a 14 oz package of Chinese Style Lo Mein Noodles. The taste and texture were great but the quantity was too much, hence the 10 oz recommendation. Next time we will also try it with the traditional soft-boiled egg which also can be easily made in the Mealthy MultiPot! I’m hoping to master a batch of Chicken Karaage for the top as well. 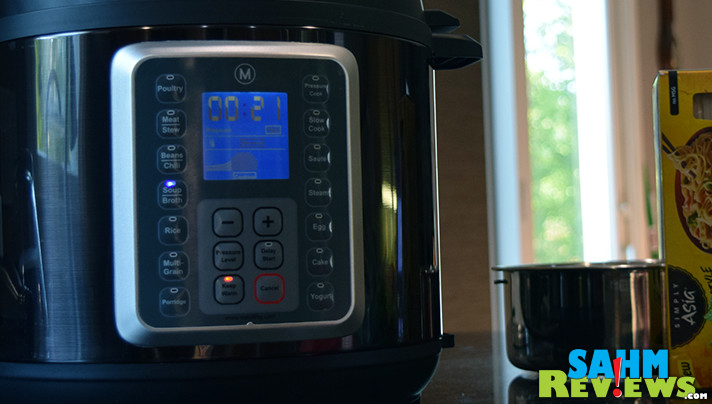 With a digital readout and 20 buttons on the front, I felt the Mealthy MultiPot was a bit intimidating. After using it for the eggs and only needing to select the “egg” button, I realized it’s like a microwave. Those specialized buttons are programmed to get it just right. The Mealthy MultiPot has buttons for Pressure Cook, Slow Cook, Saute and Steam along with a Pressure Level button and an increase/decrease to change the recommended time (hard boiled eggs vs soft boiled eggs, for example). There’s also one that reads cancel that I refer to as the impatient button. Other than that, you’ll find custom buttons for Poultry, Meat/Stew, Beans/Chili, Soup/Broth, Rice, Multi-Grain, Porridge, Egg, Cake and Yogurt.

With my first run being eggs and my second being ramen, I’m confident that I’ll find many more recipes to test out. I’m most excited about trying my Slow Cooker Meatless Chili recipe! I could use the Beans button and the Slow Cook buttons, but by using the Pressure Cook setting, I can reduce the time from a day to half an hour because I won’t need to soak the beans for a day before cooking overnight. According to their website, “Get your meals cooked and on the table up to 70% faster when using one of the 14 pressure cooking preset programs.” 70% faster?! I believe it now. 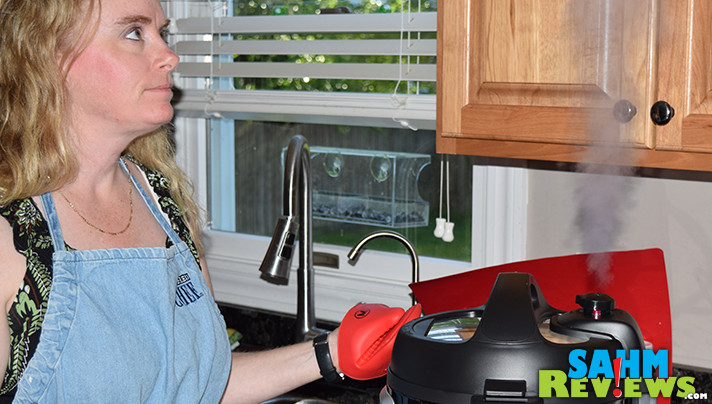 Before receiving the Mealthy MultiPot, I saw friends having discussions about which unit to purchase and the pitfalls of various models. This unit has everything those people wished were included in theirs (such as the display timer and yogurt buttons) as well as the ability to saute right in the pan. Bonus points for a count-up timer that keeps it warm after the program has completed. The Mealthy MultiPot even gives you the option to release the steam immediately or allow it to naturally release, slowly.

If you’re stuck for recipes, the Mealthy app has many and there are plenty of Facebook groups filled with discussions about pressure cooker recipes, tips and tricks. If you’re ready to jump on the MultiPot bandwagon, you can purchase the Mealthy MultiPot on Amazon for under $100 or direct from the Mealthy website. It includes the base unit, stainless steel pot, steamer basket, silicone mitts, steam rack/trivet, ladle, rice paddle and measuring cup. It ALSO includes an extra silicone gasket so you can swap it out based on what you are preparing. Sweet and savory dishes can each have their own gaskets! You can always check out their Facebook channel for more great ideas and recipes!

Have you tried homemade ramen before?