As much as we like playing games, I wish we could say that everyone in our family was as passionate about gathering around for tabletop entertainment. Every time we have a holiday or event with our extended family, we take along a variety of games in hopes we can find one that they’ll agree to play. Depending on the family, they either want to play a regular game of Euchre or encourage us to play whatever we want and they’ll watch. The last couple of times we got together, we left the games in the car… just in case. I’ve said before that the biggest problem is they don’t want to try something new.

We’re always on the lookout for new games to introduce to our non-gaming family members. I think the best way to do that is to find something that provides a hint of familiarity combined with something that has easy-to-understand rules. We received a prototype of SHEEPLE from A Smith Games and it has the potential to be a good gateway game for this group. 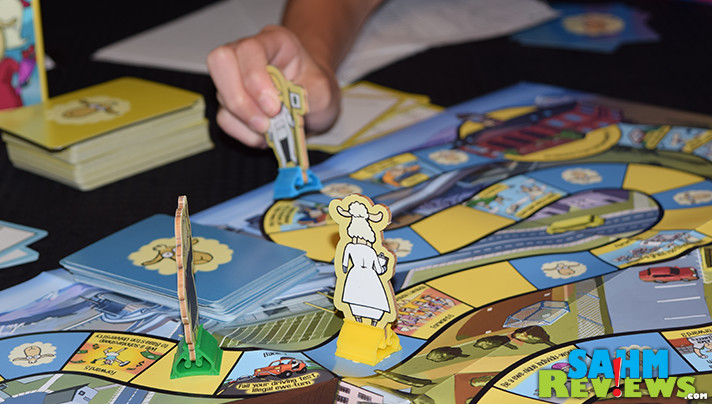 Before I tell you why I think this, let me reiterate that the copy we received is a prototype in preparation for their upcoming Kickstarter crowdfunding campaign. With that said, don’t put too much weight on the quality of the board, any typos you may see or potential changes that may come about as they finalize details. As an example, we received an email with updated rules that include a strategy variation. With that said, I want to point out that the design of the board itself lends itself to the feel of a traditional family board game such as Candyland or Life. The gameplay has similarities to other word games we’ve featured such as Choice Words and Knit Wit. SHEEPLE pairs a board game with a word game to create one family-friendly, punny game! 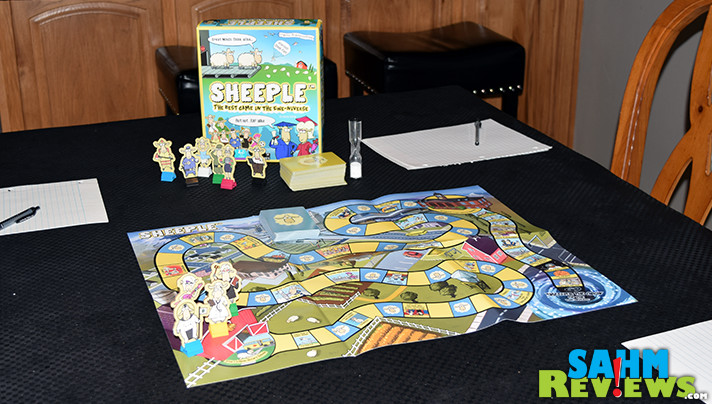 To begin, place the game board in the center within reach of all players. Shuffle the Pun and Category decks of cards and place them alongside the board. The concept is that the flock is no longer content being sheep and want to become more like people… they’ll become SHEEPLE! That means they’ll need to try to walk, dress and think like people.Each player selects a character and places it at the  e-lamb-entary school. Your goal is to be the first to reach the Ewe-niversity. (I already told you it was a punny game so you should have seen that coming!) Paper and a writing instrument are required as well. As I said, we have a prototype for mechanics and game play. I don’t know if pads of paper and pencils will be included in the retail version. 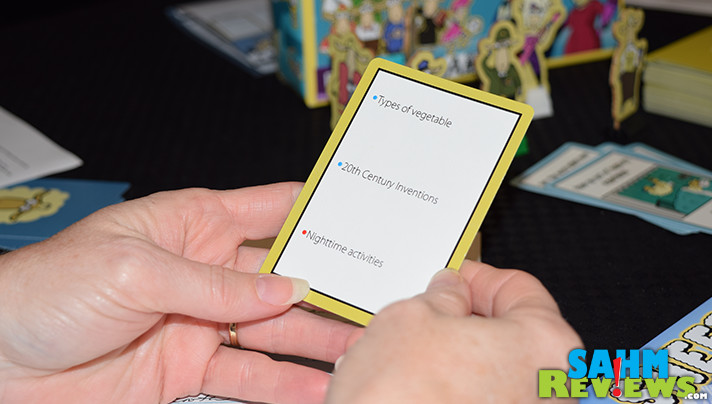 If you recall the forward and backward cha-cha-cha of This Game is Bonkers!, then you will understand that progress on the board isn’t as easy as rolling a die and moving that number of spaces. Movement is controlled by how well you’re able to answer your category card. The active player, known as the Shepherd in SHEEPLE, draws a category card and chooses one of the categories to read aloud. Flip the timer then write down as many answers as you can think of. Abbreviations are okay as is shorthand. 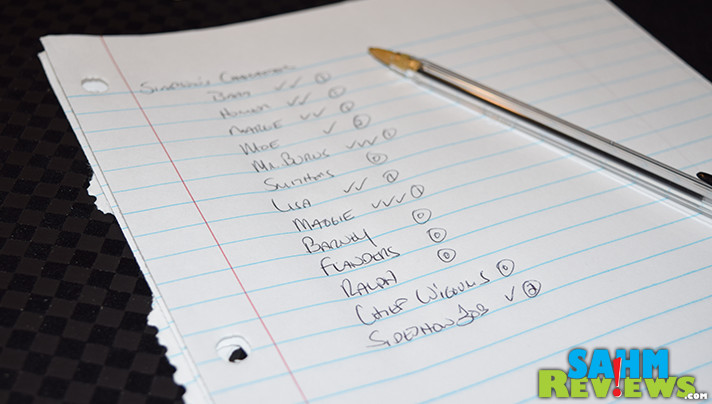 When the timer runs out, start with the Shepherd and compare answers. Read aloud the word and anyone else who matches calls it out. Act (and answer) like the flock (by matching two or more other players) and you’ll receive only one advancement point. Be too obscure and you’ll receive zero. Best is to match exactly one other and you’ll receive 2 points. 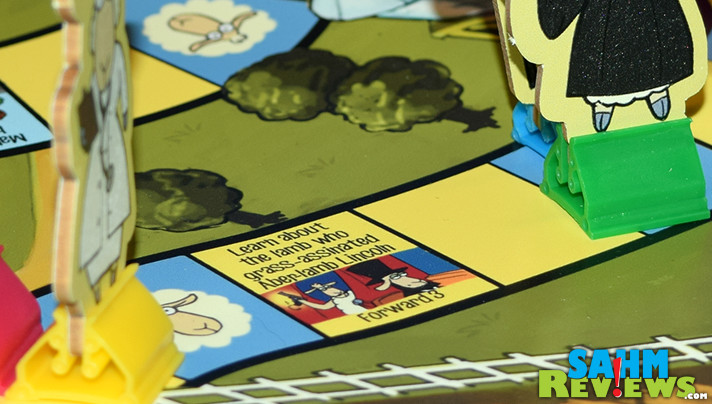 After you’ve tallied points from your matching answers, you’ll move forward that many spaces on the board. When you land, you’ll take the appropriate action which may include drawing a card from the pun deck. These cards allow you to alter your movement forward or backward in upcoming rounds. As an example, “Get the Wool Pulled Over Your Eyes. Back 3.” In the base game, you’ll take that action immediately. In the strategy variation, you’ll decide which card (if any) you want to play during the movement phase of that turn. It can help you land on better spaces or dodge bad ones. 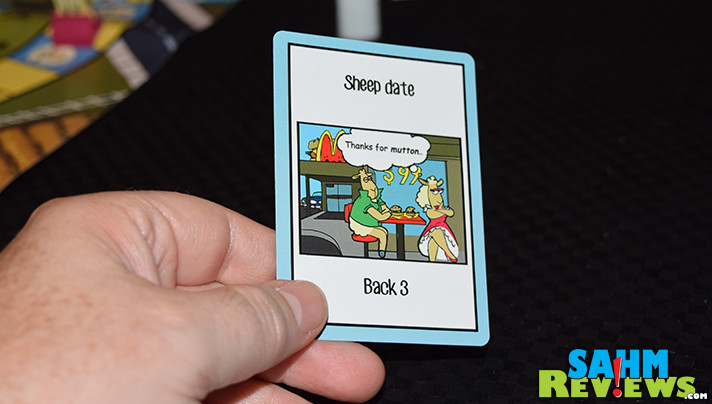 There are a few different versions of the game, but as I mentioned, we’re using the strategy option as it is involves a little more competitor interaction in the movement phase. In this case, one competitor can opt to play one or more pun cards on the Shepherd (active player). These rules may change once the final version is printed, but what I want to point out is that the designer has worked to make this game inclusive and enjoyable for all levels of gamers. The ability to mess with other players gives it more appeal to an older crowd while the base game keeps it friendly for the younger players. 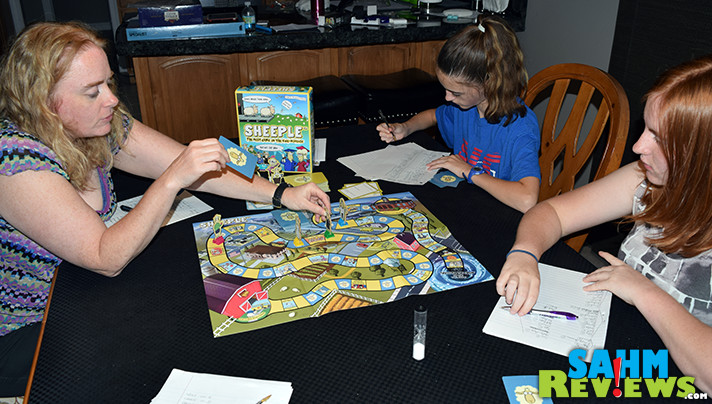 The first player to the Ewe-niversity is the winner. There’s an overflow track that allows you to go past the end space. In the event that more than one person reaches the finish on the same turn, whomever went furthest past it is declared the winner. The game accommodates up to 10 players and we found that the game only lasts a handful of turns with the possibility that not everyone will get to be the Shepherd before someone makes it to the Ewe-niversity. 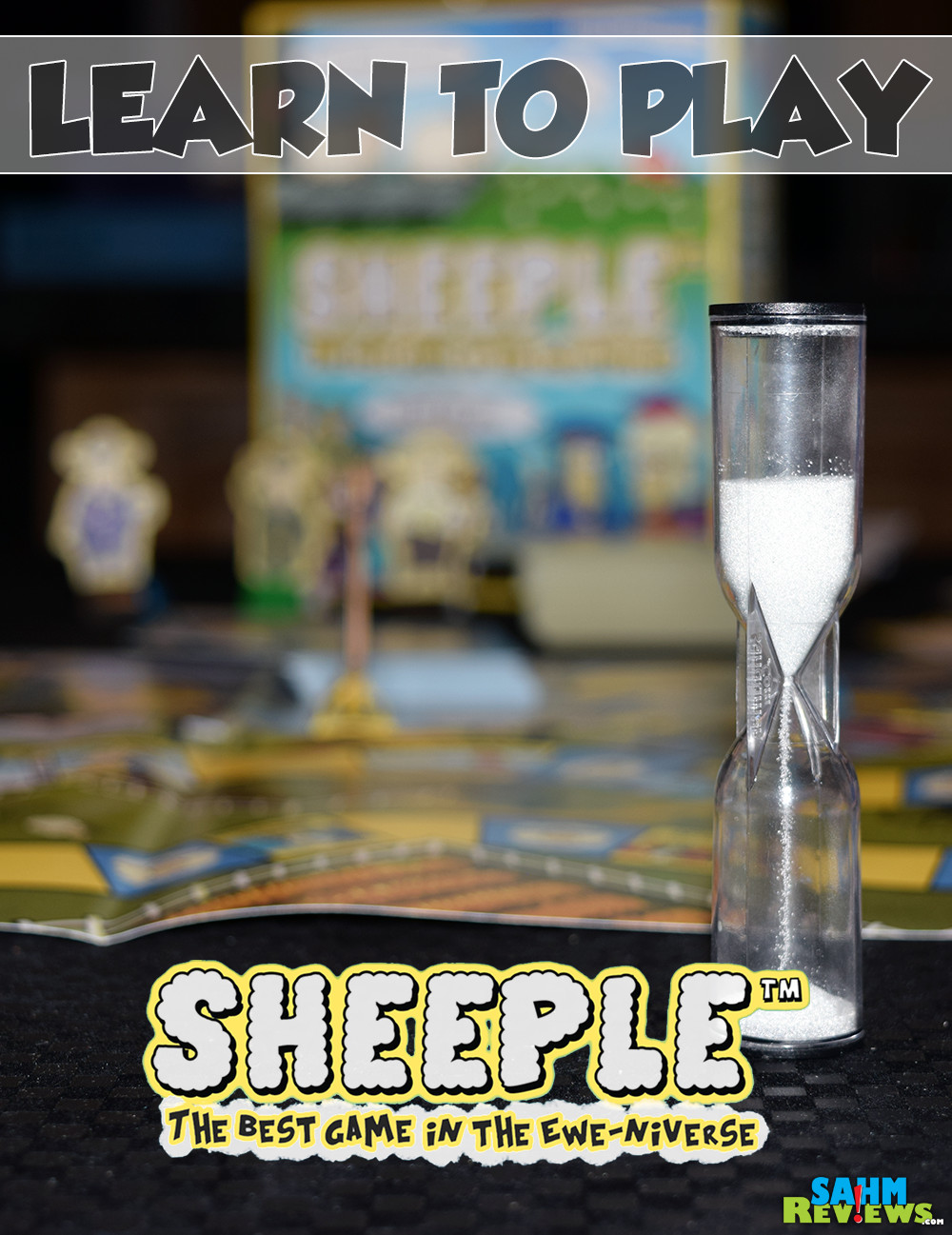 This game will work in an educational setting as kids learn to brainstorm for ideas as well as compare and contrast their answers. The puns make it entertaining and the characters and artwork are cute. Thematically, I wish there were some punishments for matching because cheating isn’t allowed in school. For example, if you match 3 different responses with the same person in the same round then the teacher assumes you’re copying each other’s answers and you get zilch for the round AND go backwards a certain number of spaces.

While it will easily work as a filler at our Friday night game group, the familiarity of the game mechanics makes SHEEPLE most inviting for our non-gamer friends and family. You’ll need to keep watch of A Smith Games on Facebook and Twitter for more information about SHEEPLE and their Kickstarter to determine if it’s a good fit for your family or game group. In the meantime, swing by their website to enter to win a $50 Amazon gift card!