I don’t know about you, but people of all ages look at what other people do and think to themselves, “I could do that.” Whether it’s for work, sports, a hobby, or something like cooking or driving, this misconception is way too common. I asked my Facebook friends for some ideas that they thought would be easy, but discovered they weren’t. Some examples were extreme (riding a mechanical bull, parkour) while others were more common (skiing, golf, changing a tire, baking cookies from scratch, knitting and doing a cartwheel). What if you were tasked with following in your parents’ footsteps? Would you be able to do it?

That’s what happened to Collin Carroll. He’s the son of Kevin Carroll, one of the creators of TENZI dice game from Carma Games. It’s been over three years since we originally featured the diverse games using TENZI dice. Each year, I reach out to Steve Mark and ask if they have anything in the works. The answer has always been “not yet.” Well this year, the answer was yes! Kevin and Steve wanted something that offered the same fast and simply gameplay as TENZI yet was different. And this is where Collin enters the picture. Fresh out of college, Collin decided to take on the challenge with the oh-so-familiar “If my dad can do it, anyone can!” response. Just like my earlier examples, some things aren’t as easy as they appear and his ideas were shot down for not being true to the original request of quick and easy like TENZI. After some reworking, rethinking and re-evaluating, he eventually landed on a concept that Kevin and Mark both agreed would work. They tooled with it to make it more polished by adding alternate ways to play (like with TENZI), came up with an appropriate name and here we now have SLAPZI! 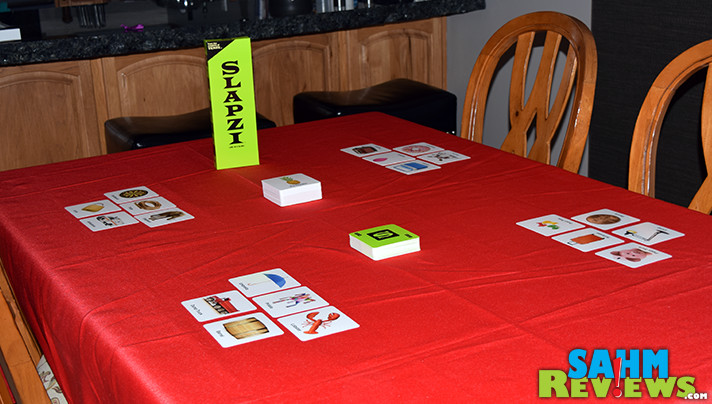 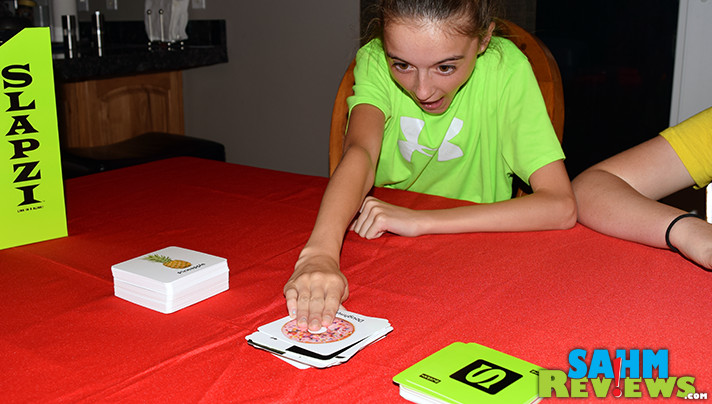 If a player slaps a card on the pile and it doesn’t meet the requirements (as determined by the other players), the offending player not only has to retrieve their slapped card, but also is penalized with an additional new picture card from the stack.

As demonstrated by the wildly successful release of TENZI, just because a game is simple doesn’t mean it lacks value. The fact that the rules can be taught and you’re up and playing in minutes means the barrier to entry is low. Families – and multiple generations at that – can easily play together while gamers can easily add it in-between brain burning games that usually last a couple hours or more. SLAPZI has that same appeal which is why the design process took much more time than the original “if dad can do it…” thought process. As with TENZI, they came up with some alternate games adding a little twist to the base game. 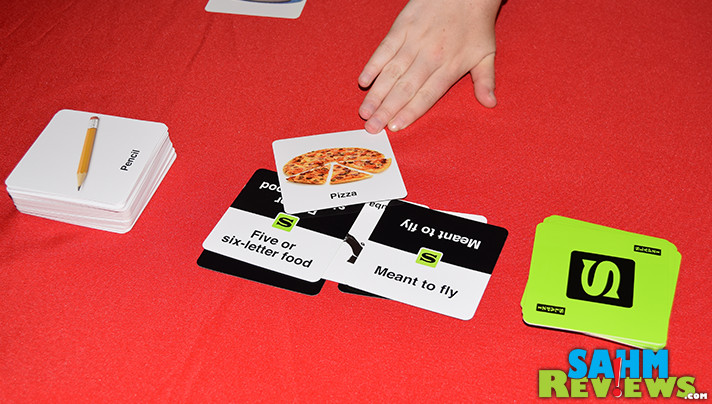 This uses the same rules as SLAPZI except instead of flipping over one clue card, two are flipped. In order for a player to discard it, they must match BOTH clue cards. First to discard all five cards is declared the winner. As an alternative, you can play EITHER-OR SLAPZI where you use two clue cards and have to match one or the other with a couple different rule options that give it variety. Or perhaps play TWISTED SLAPZI where it matches one but cannot match the other. 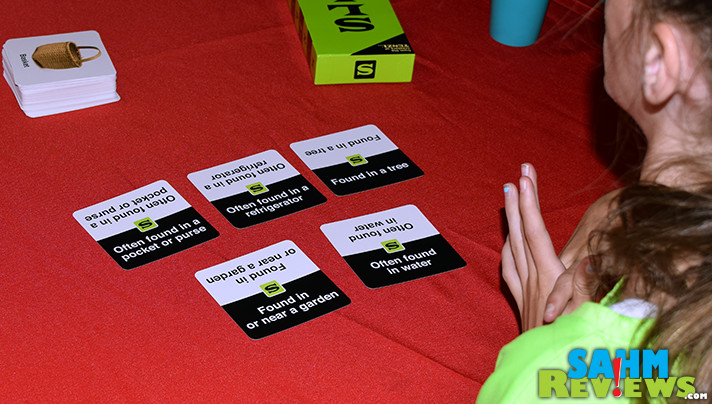 Remember a minute ago when I said the base game of SLAPZI starts with players being dealt five picture cards and they have to match the clue cards being flipped? This is reverse of that, hence the name! Players receive five clue cards and as a picture is flipped, you have to be the first to match a clue to it. 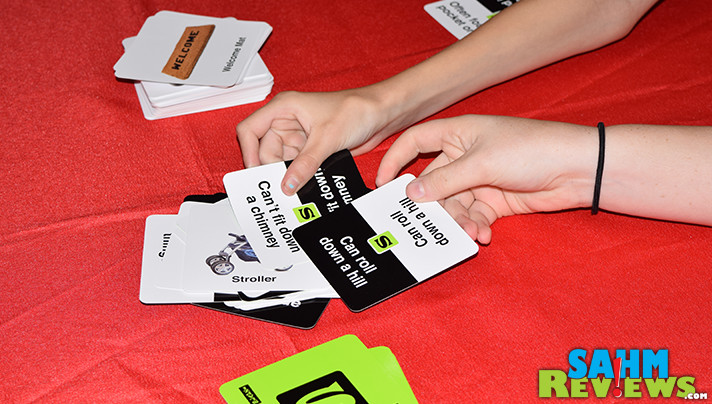 I’ll be honest and say that this was much harder than I anticipated! Scott had slapped a clue card down each time before I had even finished processing my options. Once again, an example of something simply not being unsophisticated.

I think this one is best described as a SLAPZI free-for-all. Everyone starts with their five double-sided picture cards, but all the clue cards are spread out face down in the center of the table like the giant pond in Go Fish. With this one, players will be independently working simultaneously to flip clue cards one at a time until they find one that matches the front or back of one of their picture cards. They continue this flipping process until all five picture cards have clues matched to them. The first one to complete this tasks wins. While I expected the girls to kick my butt (duh, speed game), they didn’t! There’s more to the game than the fastest hands win… in this case, you have to think fast AND act fast.

You can pick up a copy of SLAPZI on Amazon for under $20 or pick up a copy at your local retailer. Stop by Facebook to see what else the I Love Tenzi team is up to or visit them on Instagram.

Do you prefer games that are quick and can be played multiple times in different ways or ones that are more detailed but longer?