Around this house, MMPORPGs (Massively Multiplayer Online Role-Playing Games) are the online game of choice. DH usually finds one that he likes then I get hooked. For anyone not familiar with this genre of games, they have evolving storylines.  There isn’t an end to them so you don’t have to worry about eventually being done with it.  You play when you want, do what you want and play how you want.  There are quests and levels, new armor and weapons, new zones and plenty of characters to meet.My first introduction to this was Asheron’s Call. I would pull up a chair next to DH and watch while he played. It was during our pre-kid era so we would stay up together to the wee hours of the morning on weekends… then sleep in. The monthly fee was inexpensive and it was longer, cheaper and more entertaining than going to the movies.  I had created a character of my own but didn’t play it very often mainly because I wasn’t any good at it.

When World of Warcraft (WoW) came out, I was the one who stood in line to get a copy for DH (and one for my BIL). Women claim to be WoW widows but I never did. I enjoyed watching as he quested, explored and raided with his online friends. For a while, I leveled up his skills like fishing, cooking and first aid then eventually created my own character. I had a sneaky rogue named SAHM and played when I had the time. With an infant and a toddler (at the time), that usually translated to when they were napping. 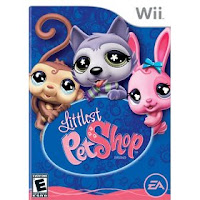 DH’s latest game is Warhammer Online – Age of Reckoning. I can only laugh and smile when Miss M stands next to his computer to watch. She takes ‘notes’ and cheers him on during battles. One day, he had to take a phone call mid-battle.  She watched as his toon got smacked around then asked excitedly and in total panic “Which button do I push to help?”A year ago, I blogged about how Miss M is going to be a future gamer. She had just received her Littlest Pet Shop TV Plug-In game and was off and running on her obsession. (She inherited it honestly, obviously.)  This year, a few weeks before Christmas, we had the opportunity to test out the Littlest Pet Shop Wii game.

With as much as Miss M loves LPS stuff AND gaming, I knew she would enjoy this game. I figured it would be a little too difficult for Miss K though. I was surprised that Miss K totally got into it. She prefers Barbies and dress-up and the whole shopping bit as opposed to being a gamer geek.  I think what did it for her was the “Meow Market” that she was able to visit regularly to change her pets clothes and accessories. When I told her it was time to giver her sister a turn she responded with “No, one more round over there to the Kitty Cat WalMart.”  I’m not sure whether to laugh that she called the online “Meow Market” a Kitty Cat WalMart or be freaked out that she associates all shopping with WalMart.  At least she didn’t call it the Kitty cat garage sale… 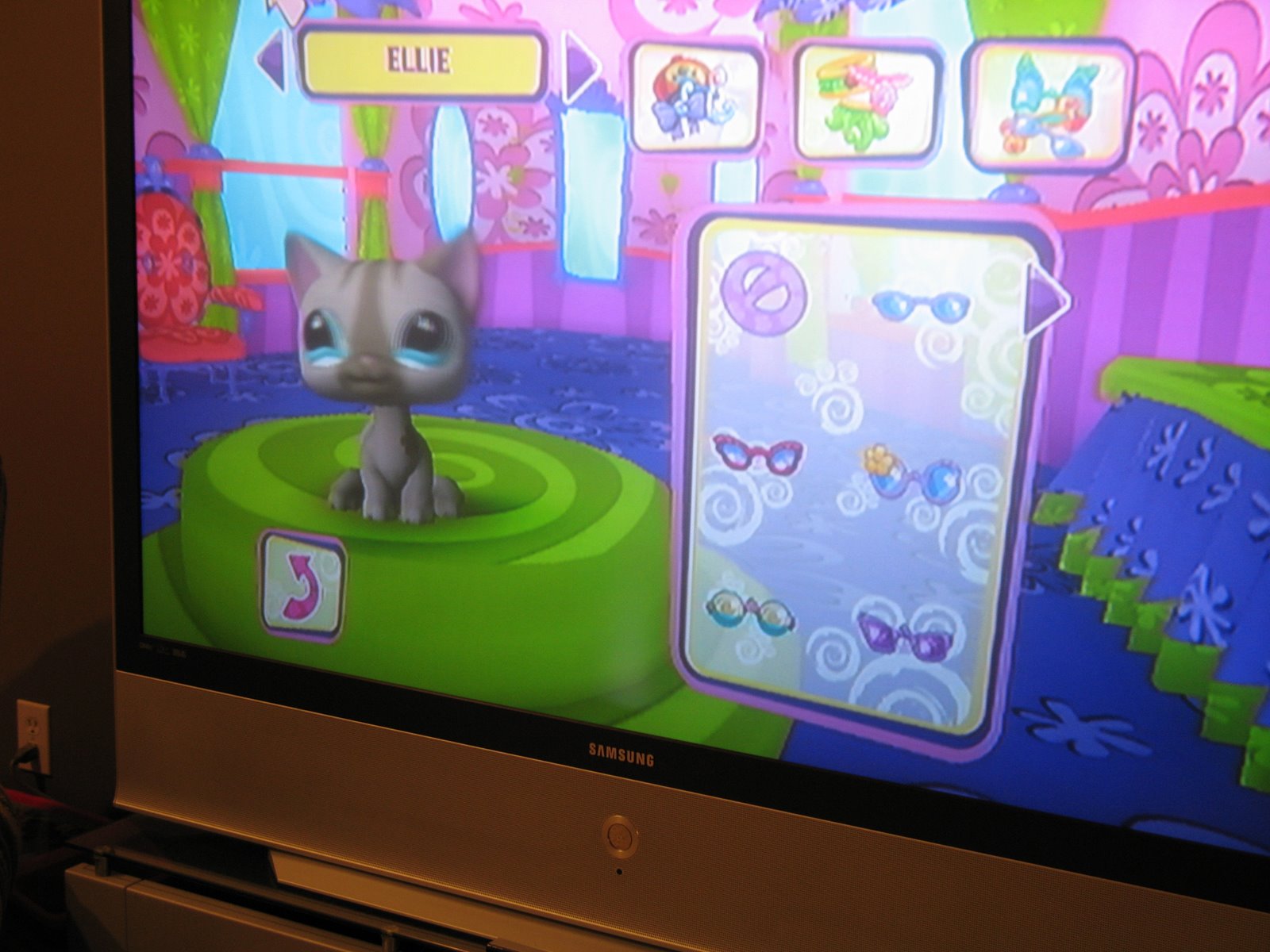 Just like in our adult versions of MMORPGs, Littlest Pet Shop (for the Wii, not online) has what seems like a never ending supply of activities, quests and various play areas. It was great that there were constant hints about what to do next so the kids could continue on the game without me hovering. When Miss M opened up a new playground, she said “Oh my goodness, that’s awesome. I hope all my pets are coming!”  There are a variety of games that require different levels of abilities.  For example, pets can swing or slide, run on a treadmill or dance – some of which are harder than others. 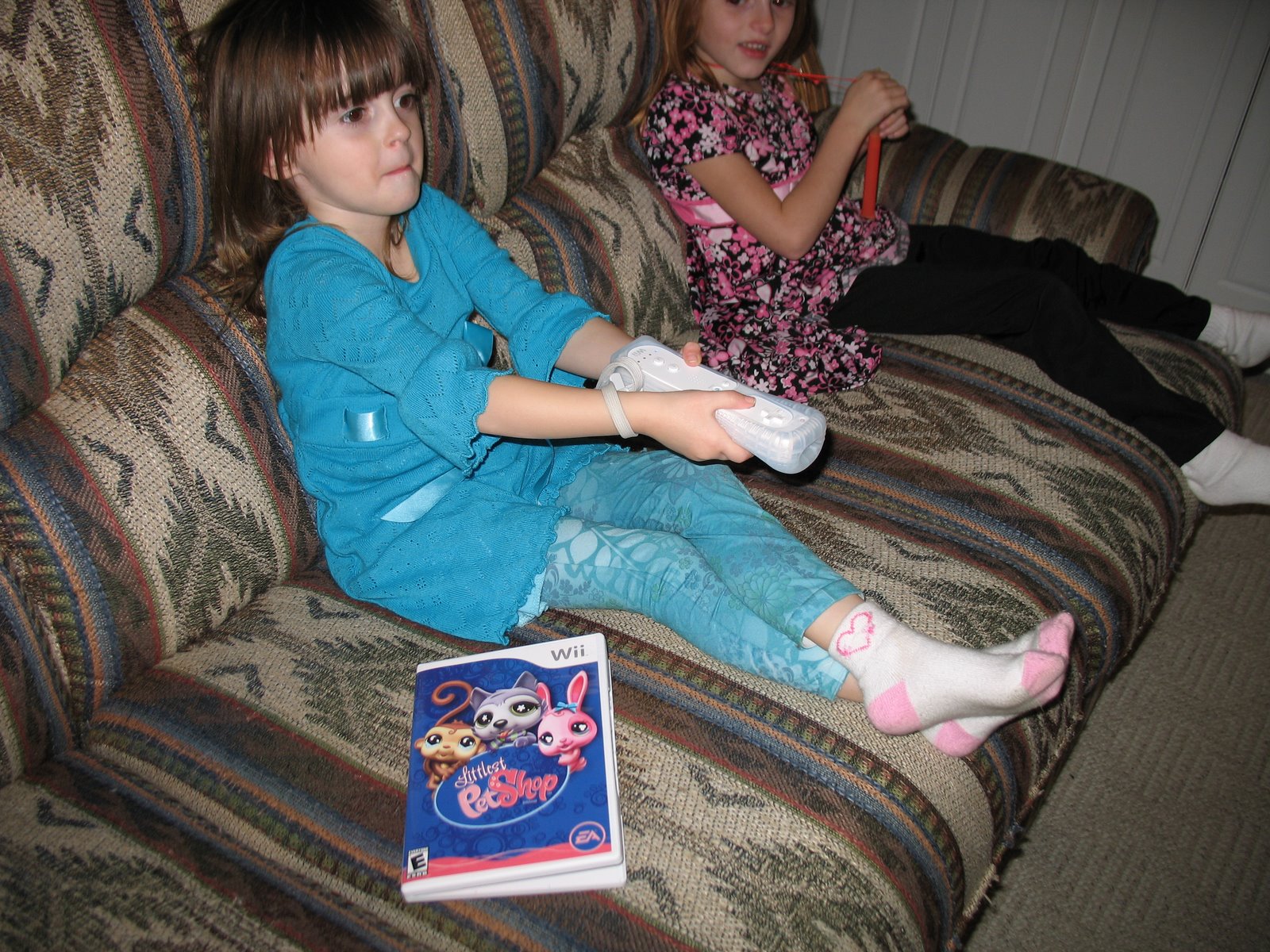 Switching pets was extremely easy and there were plenty of games and activities to do to earn money for more pets and accessories.My only complaint with the functionality of the game is that it’s only single player.  With more than one kid in the house, that can cause some problems – especially since setting up a profile for a second player means repeating all the same activities.  Ugh.  I also don’t like that it doesn’t move at angles – only right/left/up/down. The girls both got used to it quickly but I found it to be a bit annoying.

It was also very difficult to see Miss M get upset when her pets weren’t happy and she had to try to figure out how to fix it. I know from playing the Viva Pinata game that unhappy pets don’t last and I didn’t want a repeat of those hurt feelings. So I helped her get her pets back to par… does that make me a good mom or an enabler?Overall, this is a cute game that I even found myself getting attached to.  It is very kid-friendly and both my girls absolutely love it.

2 thoughts on “Small Steps toward the Worlds of MMORPGs”