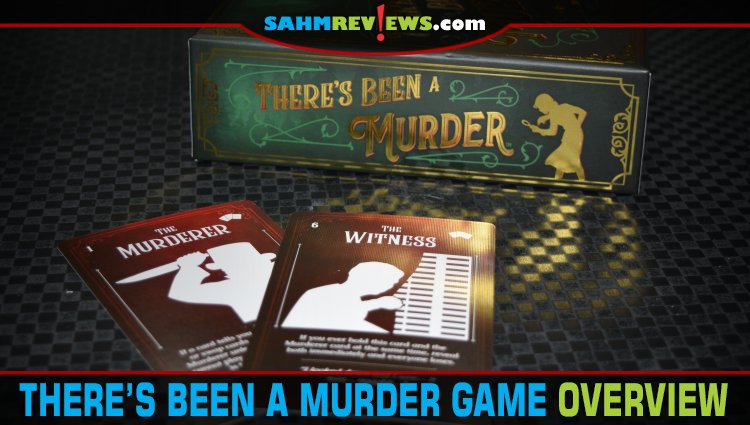 We’ve played a lot of social deduction games over the years and I’ve consistently failed. Don’t get me wrong, I have fun, but I’m sure the other players know and choose whether to take advantage of my lack of poker face. If you’ve known me in person or through reading prior articles, you recognize this is a total weakness of mine. So given the choice, I lean away from games that require any form of deception. When I was told about ”There’s Been a Murder” from my new rep at Goliath Games, I quickly emphasized my difficulty with featuring such a game. She dispelled my concerns by informing me the game is cooperative! Okay, THAT got my attention.

if you’ve ever played Two Rooms and a Boom, you’ll get the general feel of There’s Been a Murder. The game consists of 9 Effect Cards and 15 Action Cards. That’s it. Each card is a different character with the effect cards including writing that describes what happens when they are in your hand while the action cards do something when played. To set up the game, you’ll first determine the number of players and utilize the associated number of cards from the deck. There’s Been a Murder accommodates 3-8 players, but when there are only 3 or 4, cards 19-24 are removed. Remove cards 1 and 2 (murderer and detective) from the deck and shuffle the remaining. Add the detective card randomly somewhere on the top half of the stack and the murdered somewhere on the bottom. Deal two cards to each player.

It’s a cooperative game where players work together to uncover the murderer. On your turn, you’ll draw a card (if you have fewer than two in your hand) then you’ll play one. Sounds simple, right? The process is simple, yes. Winning? That’s another story!

When you play a card, your choice is to place it in the discard pile or pass it to another player depending on the instructions on the card. You aren’t allowed to talk about what is in your hand unless the information on the card says you may. So you’ll have to remember what you pass where, what other people tell you and keep watch of what has been discarded.

The game is also over if there are no cards left in the draw deck when someone needs to draw or if the Murderer, Informant and Detective cards have all be discarded without meeting the prior win condition.

There’s Been a Murder requires a mix of thoughtful gameplay and luck of the draw. It accommodates up to eight players and is approachable by anyone who has played other social deduction games. If you’ll be gathering with friends and want to give this game a shot, ask your local game store about availability or order a copy from Amazon. Put on your detective hat and follow Goliath Games on Facebook, Twitter and Instagram to learn what else they are working on!

Have you participated in murder mystery games?