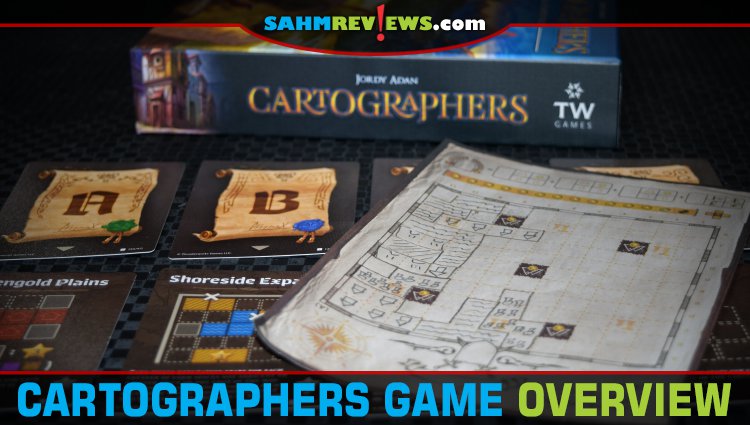 I was reading something the other day about things the next generation will never experience. Those of us that lived it know the anguish of the sound of the modem and being told to get off the line so someone could make a phone call. It got me thinking about a lot of other things they don’t have to worry about. Like being stuck on the side of the road with a flat tire. Or not having anything to watch on TV because, you know, there were only three channels. Four if you included PBS, but nobody counted that because the only option was usually Lawrence Welk. One idea I regularly circle back to has to do with navigation. My generation was the last one that probably got lost while driving and certainly the last to have to deal with folding a map. As I played Cartographers by Thunderworks Games, I realized that there were generations of people who didn’t even have a map to go by. I’m fortunate that my only experience to that extent involves a tabletop game.

Cartographers is a flip and write game that accommodates countless players. There are options to play alone or with as many people as you have supplies for. Your job is to map out territories for the queen. Not only are you dealing with the people who contest your presence, you are also trying to outwork your peers who are trying to do the same. Everyone wants to please the queen.

There isn’t much to set up. Everyone gets a map sheet and writing utensil. Players must agree as to whether exploration will take place on the wilderness or wastelands side of the worksheet. Four edict cards are arranged in a row then four scoring cards (one from each type) are randomly assigned to the edicts. The season deck is set alongside the play area with the stack ordered beginning with spring then summer, fall and finally winter on the bottom. One ambush card is shuffled into the explore deck then the other three ambush cards are set aside to be used in each of the other seasons.

The four rounds (seasons) are played independently with each consisting of three phases and multiple turns. In the first phase, cartographers are exploring. Reveal a card from the top of the deck. You’ll encounter three types of cards: Land/territory, ruins and ambush. I’ll explain the ambush cards shortly, but for now we’re going to focus on the land and ruins cards. Land cards indicate the terrain type and shape that you’re exploring. You’ll draw it anywhere on your sheet except over wastelands, mountains or previously charted areas. If there are two choices for either the terrain or the shape, you’ll select one. When a Ruins card is revealed, flip another card and proceed as normal except you’ll chart across a ruins space on your map.

Ambush cards represent the problems that arise while on the journey. When these cards are drawn, maps are handed to an opponent and that person draws the represented shape. The directional icon on the card indicates which other player will be responsible for this task. It could be the person on your right or perhaps on your left. But don’t worry, you’ll receive one from the person on the other side of you so take your frustrations out there. Cartographers will need to chart the spaces around all the enemies or they’ll lose reputation at the end of the season.

In case it didn’t click, reputation is just another name for scoring points. The primary way this is done is by satisfying the Queen’s Edicts which change each season. As you’re charting your map, keep those in mind because the better you’re able to fulfill the requests throughout the game, the more you will score. In addition to edicts, some exploration cards feature a coin alongside one of the selections. When you select this option, fill in a space on the coin row on the bottom of the map. They increase your reputation as well. Each time you map out a mountain’s surroundings, you also mark another coin.

The final phase is when players check the status of the season. Each season card features a number for how long it will last. You’ll continue revealing exploration cards making note of the “time” in the upper left corner which indicates how long each takes. When the time on the exploration cards equals or exceeds the season value, the round ends and cartographers score their progress. Two edicts are tallied each season in addition to the reputation from coins and the loss from not surrounding the enemies.

After everyone has completed their reputation calculations, begin a new season in the same manner as the prior. Cartographer duties are over after the fourth season at which time the best of the best will earn the approval of the queen! Map out a plan to check out your local game store for copies. If you prefer not to journey out, order a copy of Cartographers on Amazon or direct from Thunderworks Games. Check out our How to Play Cartographers Reel on Facebook and Instagram then follow Thunderworks Games on social media (Facebook, Twitter, Instagram) to hear more about additional titles they are charting for the game table!

When was the last time you referenced a physical map?