If there’s one category of games we don’t play very often as a family, it would have to be word games. It isn’t because we don’t enjoy them – word games just seem to be hard to play as a family when there is a wide range of ages (and thus, a wide range of vocabularies). In all honesty, I suck at word games. I just cannot seem to piece together more than four letters from a scrambled mix. Nicole regularly trounces me at Scrabble, and I won’t even mention my brother and his friends who compete in Scrabble tournaments…

So when we were recently introduced to a new game publisher, Bear in Mind Games, which featured word games in their catalog, I knew I was in for a loss or two. But then I spied a game on their website that was math-based. That one I would have in the bag, and I’ll save it for last. First, I want to show you their two unique word games (yes, which I lost at) before proclaiming victory by numbers.

At first glance you might think Emkata is just another Scrabble knockoff. The only thing vaguely similar is the use of tiles and the fact you are putting together words. That’s where all similarity ends. 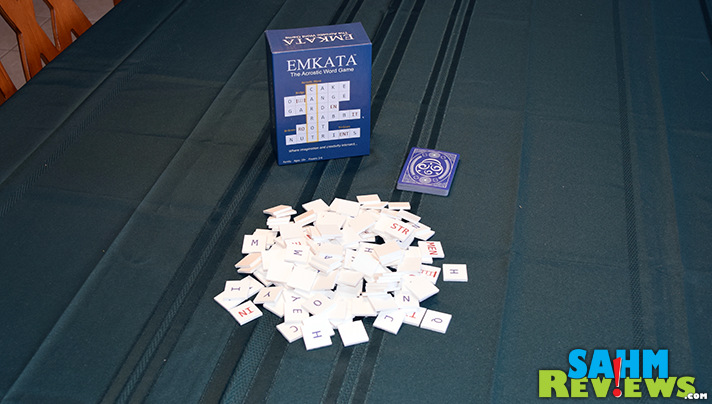 Emkata is played by two players (or two teams of players) without using a game board. All of the letter tiles are turned face-up and placed in the center of the play area. They are also typically sorted by type (one letter, two letters, three letters or bridges) for easier identification.

Also included is a small deck of cards with categories and suggestions. Each team draws a category and chooses one of the suggested words for their opponent. Using the tiles, a vertical word is laid in front of each team matching the chosen suggestion. This becomes your ‘board’ to work off of. 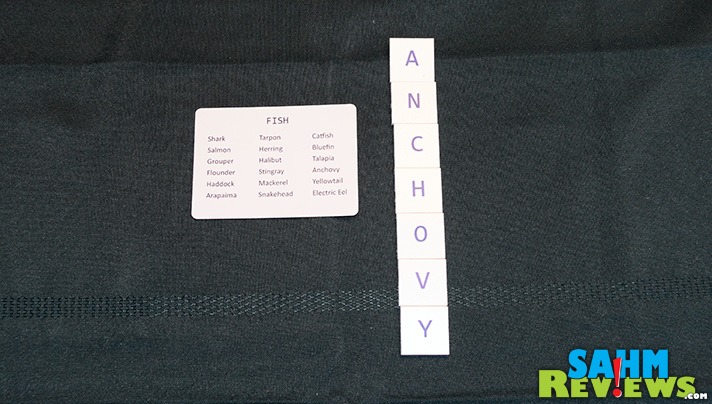 Using a 5-minute kitchen times (or a cell phone app), each team races to create words that intersect with the starting suggested word, creating an acrostic. And not a typical acrostic of using only the first letter – they can be in any part of the new word as long as the original (vertical) word remains in place.

Once the timer ends, the round is over and scoring takes place. For words created with only single-letter tiles, you receive one point for each tile used. But if you utilized 2-letter or 3-letter tiles, those act as multipliers. As an examply, if you spelled the word “vacation” using “V”, “A”, “C”, “AT” and “ION”, you would count five tiles and then multiply it by both 2 and 3 for the special tiles used, yielding 30 points! 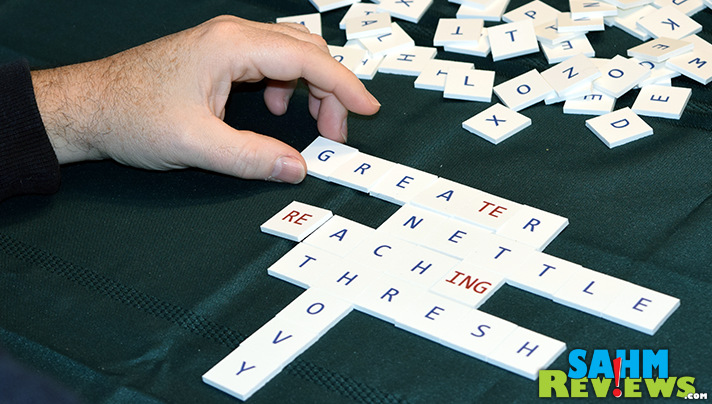 Bridges act as wild tiles, but do not count towards your tile score. Since both teams are grabbing from the same tile pile, you may be forced into using a bridge just to complete the word! Knowing each round lasts only five minutes, Emkata turned out to be a great puzzle/word game that didn’t require the ability to make a word out of just seven tiles! You can find copies on Amazon, at Barnes & Noble or direct from Bear in Mind Games on their website for under $20!

The second of Bear in Mind Game’s word-themed titles, Takaro is unique with its multi-colored tiles. But this time they are all laid out face-down! The purpose of the different colors is to denote the type of letter on the other side. White tiles are consonants, yellow are vowels. The orange tiles are called “Power Vowels” and represent vowel combinations like “AI” or “IE”. 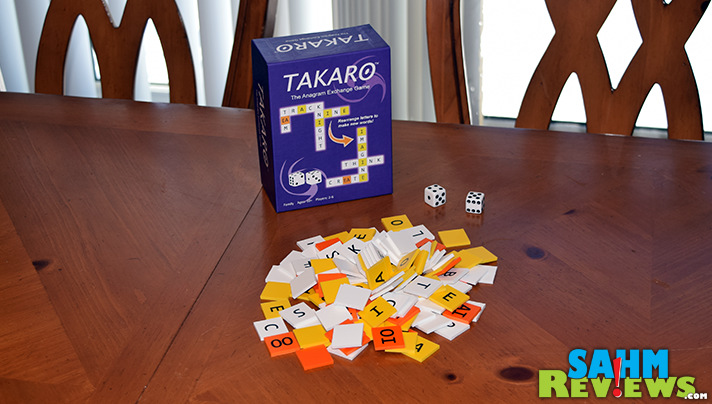 Also played by two players or two teams, each side draws ten vowel or consonant tiles (any combination), plus an additional random number of tiles determined by the roll of two dice. You also have the option of taking one Power Vowel tile in addition to all of the others. 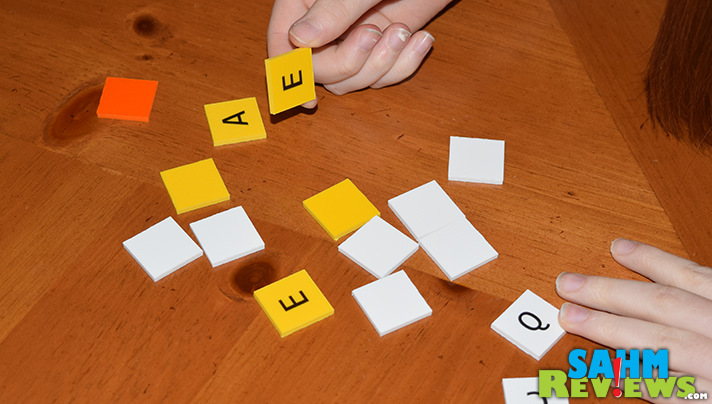 Takaro is played over two rounds, each lasting five minutes. Using only your selected tiles, turn them over and construct a mini crossword puzzle with words at least 3 letters/tiles long. When time is up, each completed word is worth one point per tile with a multiplier bonus depending upon the length of the word (4-6 tile = 2x, 7+ tiles = 3x). 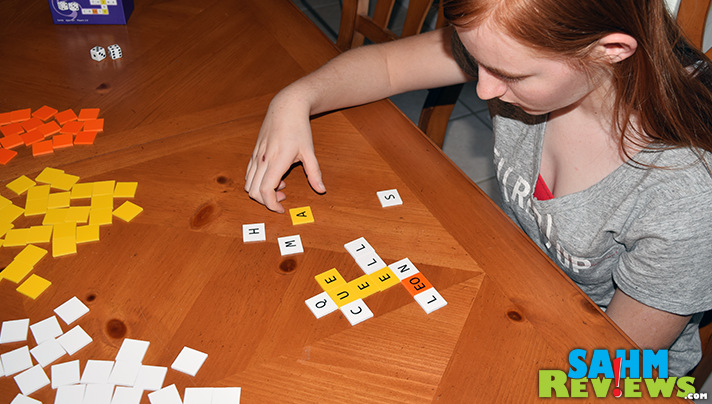 For the next round, exchange tiles with the other team and go again. But this time you cannot use any of the exact words your opponent used previously. Again, after five minutes, tally the score and add it to your first round total. Of course, highest total score wins! 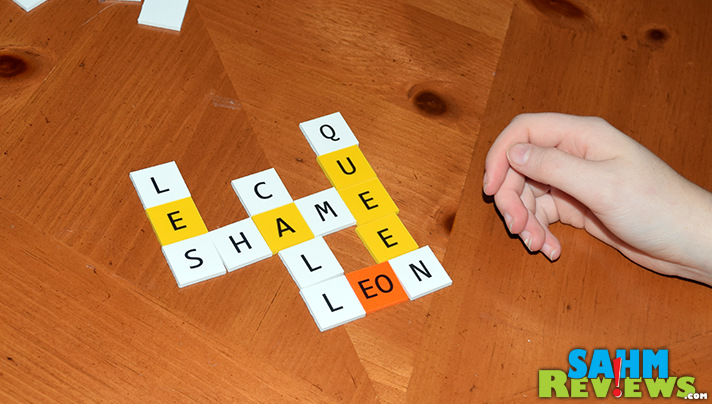 Also available on Amazon, Barnes & Noble and direct from Bear to Mind Games, this one is a little better value at under $15!

Now we’re looking at something more to my liking – a game based around numbers (and math). Secan is also played with teams (or just two players) and also uses plastic tiles, but this time around there are no letters to be seen anywhere. 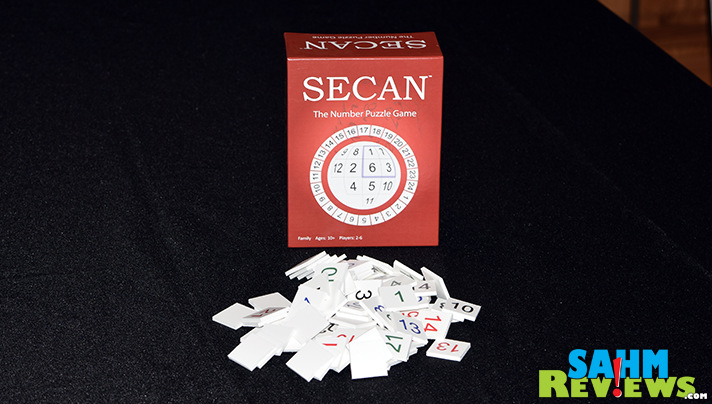 Secan is definitely a head-to-head competition as both teams will start with the same grid of tiles in front of them and are challenged to finish a ‘puzzle’ with the rest of the numbers using valid mathematical equations. Using the numbers from two adjacent tiles, add, subtract, multiply or divide them to get a result matching one of the unused tiles. 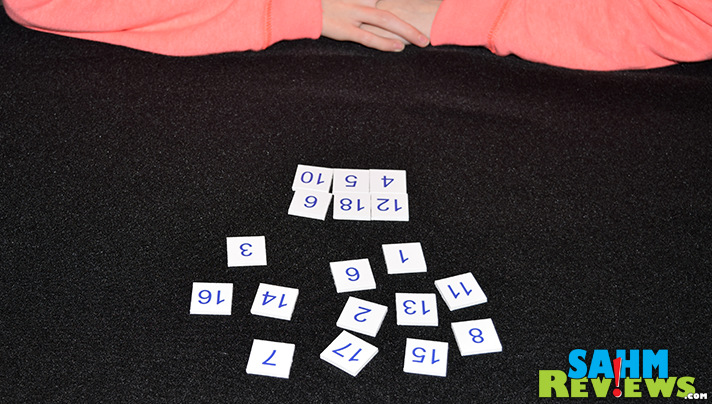 Ultimately you are trying to utilize all of your tiles within the five-minute round limit. Once the timer expires, the team with the most complete puzzle wins the round and the overall game is won in a best two-out-of-three competition. 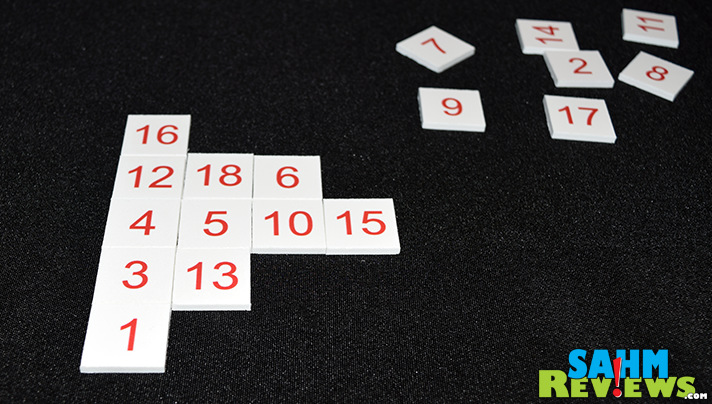 Conveniently there are also three difficulty levels of play to choose from as laid out in the included rules. Beginners start with only 12 tiles and will have a starting grid of 2×2. The advanced players will have all 24 tiles, and a 2×4 grid will serve as the starting area. 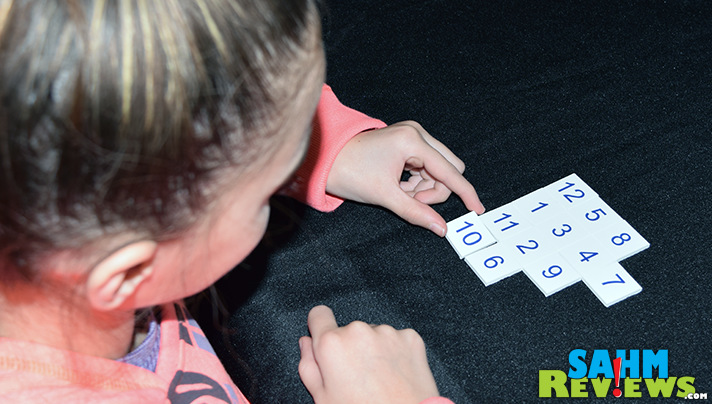 Of the three games, obviously Secan was my favorite (no words!). I found it relaxing to play it in a solitaire mode, practicing to complete an entire puzzle on the advanced level. Rest assured, it isn’t an easy task. Just like their other two games, Secan is available on Amazon, Barnes & Noble and direct from the publisher.

Although I’m not normally a fan of word games, in the end I really liked what I saw from Bear in Mind Games. The fact that rounds are only 5 minutes and the games are so much more than just making words from tiles might just change my attitude about the genre. Check out their Facebook and Twitter timelines to see if they have anything else in the pipeline and then grab a copy or two for your game collection!

Are word games your forte? What’s your favorite?