Here’s a little test to see if you’ve been paying attention. Do you remember what a 4X game is? The term “4X” was first termed during a computer game review in 1993 and referred to the ability to “eXplore, eXpand, eXploit, and eXterminate” as part of the game. There are a number of popular titles in this genre – Twilight Imperium, Exodus: Proxima Centauri and Eclipse are all great examples. But not many people have the 3-8+ hours required to finish one of these games. That’s where LudiCreations and Passport Game Studios have found a niche with Pocket Imperium.

Played over 6-8 rounds (30-45 minutes) depending on the number of players (up to four), Pocket Imperium takes up far less room than a normal 4X game. If you remember, typical titles in this genre require a LOT of table space. Here’s an example from our most recent Exodus session: 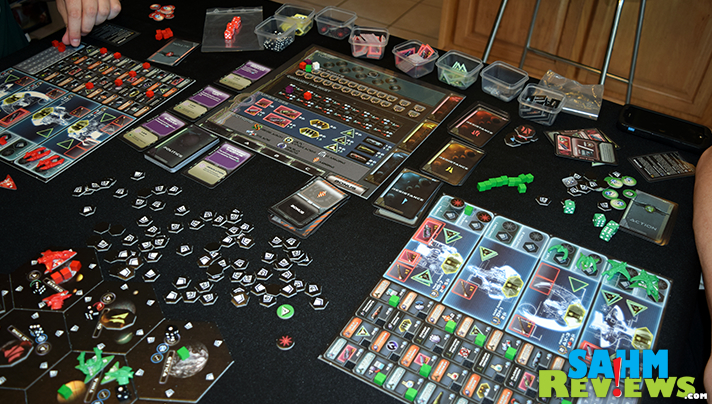 And that’s only half of the table! Thankfully Pocket Imperium has far fewer components and comes in a Kindle-sized box. The entire board is made up of seven hexagonal tiles and each player receives twelve wooden ships of their color and three playing cards. 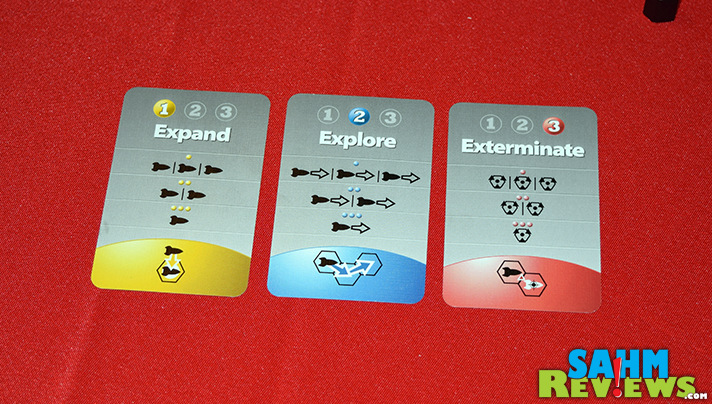 After selecting your starting planet you must now determine the order in which you want to play your three action cards. This is where things get interesting and may influence who you sit by at the table. During each round you will perform all three actions, but the efficiency in which you do is determined by what the players on either side of you also choose. 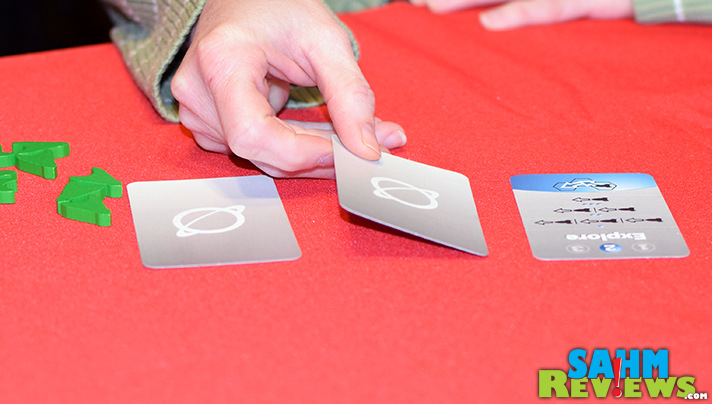 Secretly put the three cards in the order you wish and then reveal them one at a time from left to right (at the same time as the other players). If neither player on either side of you chose the same card in the same position as you, then you get to perform that action three times. If one of them matched, then your limit is two of that action. If both players seated next to you chose the same card, then you only get to execute it once. 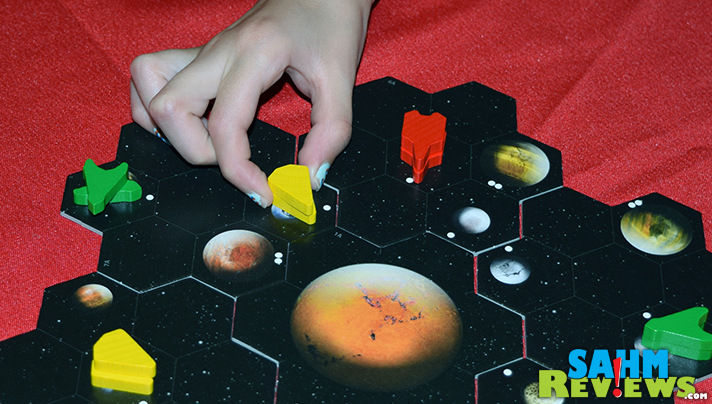 If you chose “Explore”, then you get to move 1, 2 or 3 (depending on the matching above) groups of ships up to two spaces on the board. “Expand” allows you to deploy additional ships to the board to a location already occupied by you. 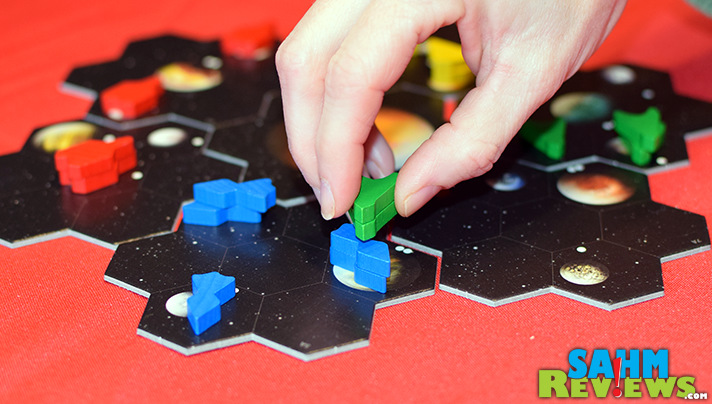 “Exterminate” is where the fighting happens, but is really a simplified version of battle. You can attack a hex adjacent to where you are currently located and each player loses ships equal to the number of the other player. In the example above, green is attacking blue. They both have two ships, so both sides will lose them all. Green did this to exterminate them from a level 2 planet, preventing the blue player from scoring at the end of the round. 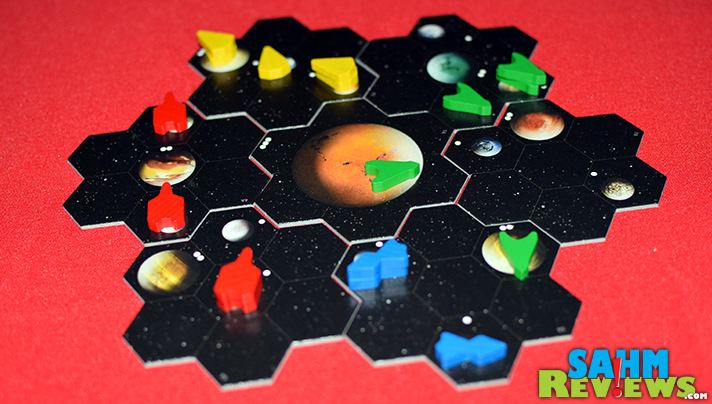 After all three cards have been resolved, the round ends and scoring begins. Going clockwise, each player gets to choose one sector to score and any planet that is ‘owned’ is awarded victory points equivalent to the level of the world. Each sector can only be scored one time per round, and since there are more sectors than players, choosing the right one for you is imperative. After every player has chosen and scored a sector, the player that controls the center (Tri-Prime) sector can now choose to score one additional sector that hadn’t previously been scored. Once complete, the next round begins again. 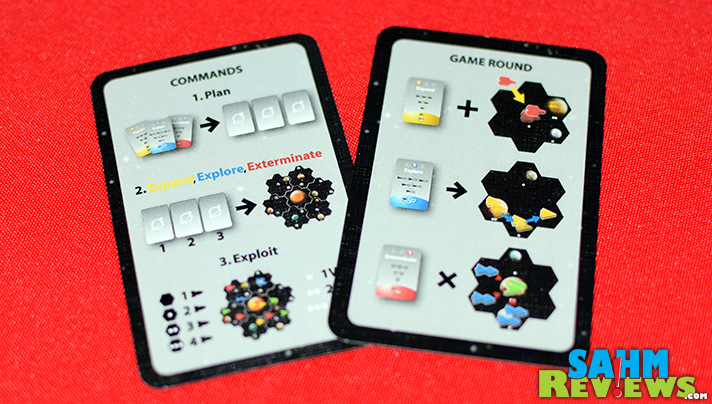 It may sound like a lot to remember, but rest assured it is MUCH less than is required in a typical 4X game. But just in case, LudiCreations and Passport Game Studios kindly include a set of reminder cards to keep you on track!

After you have mastered the basic game play, you might choose to implement some of the variants printed on the last page of the rule book. Put bounties (victory points) on random systems or even play around with the layout of the board. On the back of each sector tile there is also a more advanced version which you can mix/match to keep the game fresh.

If you’ve ever wanted to try out a 4X-type game, but have been intimidated by the complexity or time required, then Pocket Imperium is the perfect solution. Not only is it easier to learn and quicker to play, it comes in at a fraction of the price of a typical large-scale space title. Easily picked up by kids as young as 8, this game leans a little more to the abstract side than true strategy. But don’t let that deter you – it has a ton of replayability and is more likely to get to the table of casual gamers than the epic versions.

Check out LudiCreation’s website for this and other great small-box titles and be sure to keep an eye on their Facebook and Twitter timelines for announcements and specials! And don’t forget our friends at Passport Game Studios – they have more games than I could mention, including that multi-hour 4X game I showed above!

15 thoughts on “Is That a Rocket in Your Pocket?”