Our plans for today got a bit off track. We had planned on going out-and-about for the day but switched things up a bit when we all took too long to get moving. Since last Saturday and Sunday required us to be up at o’dark hour for a swim meet, being able to sleep in until 8:30 was a nice treat. Yes, I slept until 8:30. Don’t judge… I was up twice in the middle of the night with our aging dog. So when I was able to sleep ‘in’ until 8:30, I was thrilled. That virtually never happens.

But we had a few stores we needed to hit so we headed to lunch then on to Sam’s Club afterwards. On the way there, I spotted a group of three motorcyclists. Two with helmets and the third dressed as an over-sized Ernie from Sesame Street. I like to tell myself that I”m not alone when I say that little things like this make me giggle like a kid. I loved Sesame Street as a kid and enjoyed sharing it with my daughters when they were younger. Believe it or not, I tried to get a picture of him but he was much too fast. Ernie should obey the speed limit but he didn’t. On the way out of Sam’s Club, I spotted another, larger group of cyclists with Cookie Monster leading the pack. He was also speeding and no, I wasn’t able to get a picture. Rule-breakers.

All that Sesame Street excitement reminded me of a new XBox360 game that Microsoft had sent me. It’s an interactive game using the Kinect. I love our Kinect… it elevates ‘games’ to a whole new level. I originally saw this game at the Sweet Suite at BlogHer but there was a line to get to it and I was in the last session of the day with the clock ticking. With so many other brands to meet, standing in line wasn’t something I had time for. Now I’m understanding why there was such a line… this interactive game is very cool.

My original plan was to have a young neighbor child come over and help check out this game but I decided to have Miss M (9) and Miss K (8) help out first so I could get some photos of the screen because a young child wouldn’t likely understand me say “wait, wait, I need a picture of that first.”  There are two disks in the game – One for “Growing Up” and one for “Science”. I grabbed Miss M for the first and we started checking it out. What I discovered is that 9 isn’t too old to interact with Elmo. She couldn’t stop smiling. After a game of “catch” with Elmo learning about throwing “over” and “in between”, she moved on to learning about a growth chart. While the characters talked about growing taller, being tall vs short and providing great life lessons, in the background, small pictures of rulers were showing up and each time she saw one, she yelled “Picture”. The goal was to find 20. I’m like “Honey, I want to see what else is part of the game. See if you can figure out how to go back to the menu.” and she responded “I don’t want to go back right now. I’m right in the middle. I’ll tell you when I’m done.” She was truly enjoying the “I Spy” game. A young child would probably be over-the-moon for this interactive game with Elmo and friends.
Me (Mimicking eldest child): “It’s going to be a while. I’ll tell you when I’m done.” Sheesh. 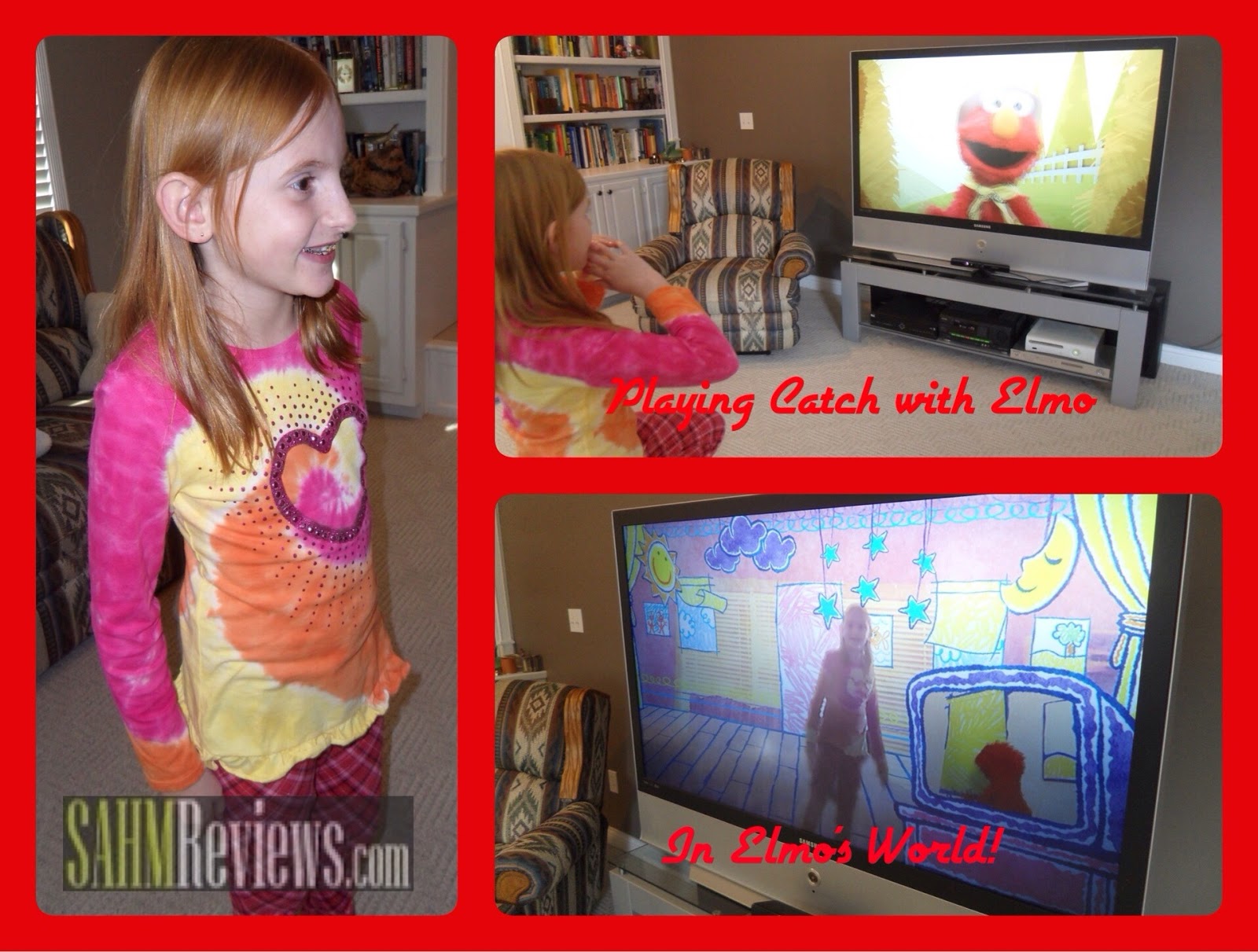 Eventually, I was able to get her to move on so I could see other features as well as the other disk. Each disk contains four themes and within each theme are various chapters. A child can start from the beginning and go through the entire theme or can select just one chapter. The Season 1 Volume 1 Growing Up disk themes are “Elmozilla”, “Goodbye Pacifier”, “Baby Bear’s Baby Doll” and “Siblings” while the Science disk themes are “Humpty’s Big Break”, “Failure to Launch”, “Rocco’s Boat” and “Bubbles”.  Miss K learned about making bubbles. They talked about the ingredients for making bubbles and how much of each ingredient to use. They even made the batch incorrectly to show what happens when you do that. They went into how you don’t need a bubble wand to blow bubbles and gave some unconventional examples like an orange juice can and a funnel.  I was curious if she was really paying attention so I asked her a few questions. Sure enough, she was. She was able to tell me that it requires specific amounts of certain ingredients or it doesn’t work. 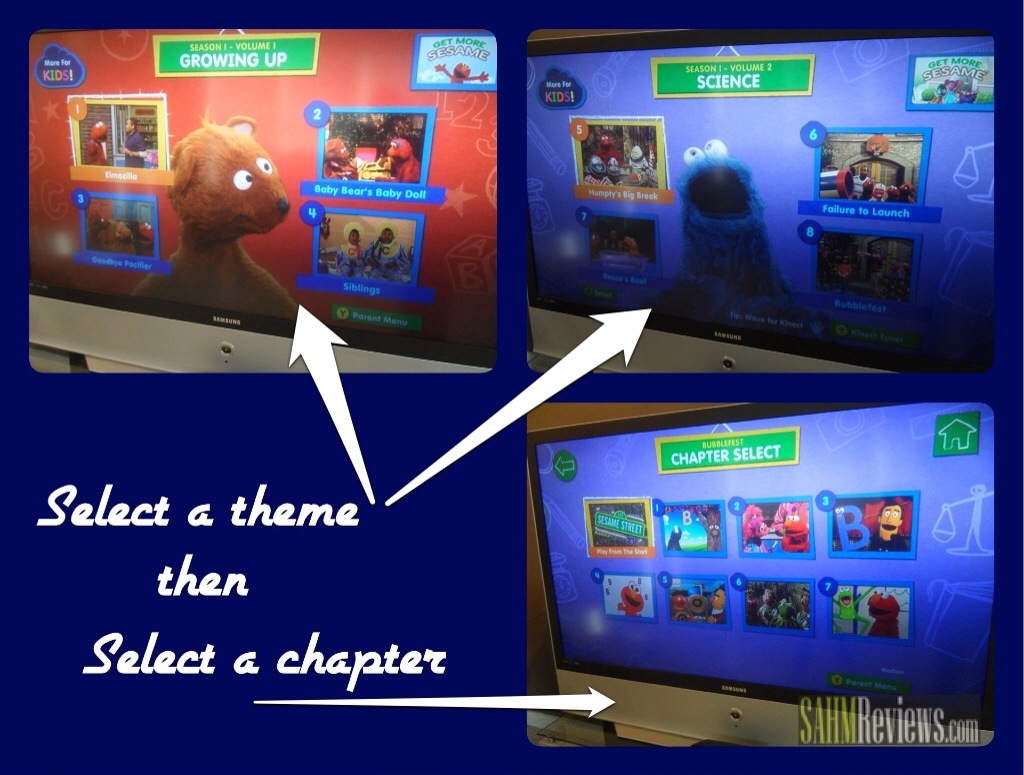 Her chapter event had the “I Spy” feature also! 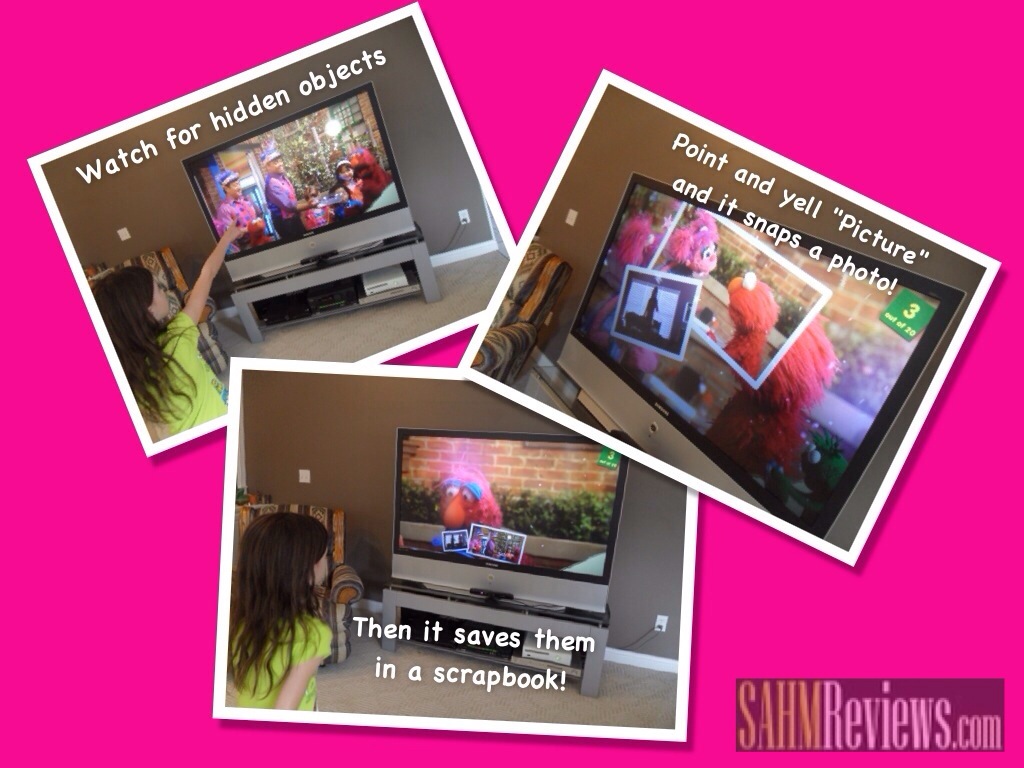