The “memories” section of Facebook is bittersweet. I’ve recently been getting reminders of the cruise we took several years ago. Coupled with the emails and postcards from Carnival Cruise Lines and Disney, I’m itching to get back on the water. It will be so nice when we’re able to safely travel again. It may not be the same, but for now we’ll have to get our fill soaking up the memories of prior cruises and playing board games about life on the water. Tricky Tides from Zafty might not sound like a cruise-worthy game, but it’s about boats on the water and today, that’s what I need. 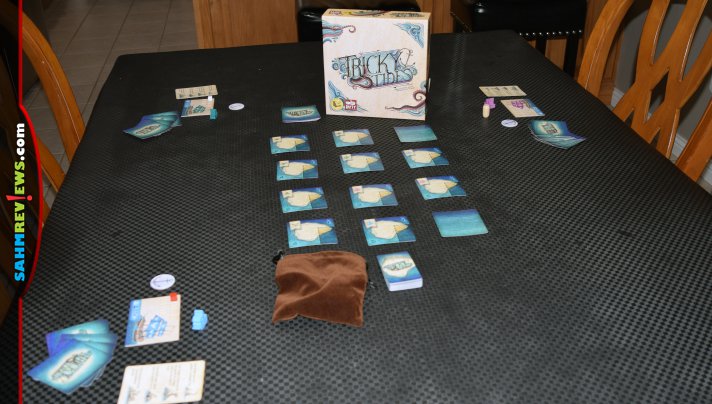 Let’s set sail! Everyone selects a color, takes the related ship pawn and board as well as an anchor token. Shuffle the monster bonus cards and give one to each player. Place all the goods in the draw bag. Shuffle the island cards then form a 3×4 map in the center of the table, leaving space for order cards next to each. If you’re playing with less than four people, flip the island cards associated with the unclaimed player colors. Select a player to be the first leader. All other players draw one random good from the bag as a consolation. Beginning with the player to the right of the leader and working counterclockwise, each player selects one of their two starting ports and places their ship there. Shuffle the order cards and randomly place one face-up on the designated spot on each island card. Each island has a number listed in the lower left corner of the card. Draw this quantity from the bag and populate each island accordingly. Shuffle the navigation cards and deal eight to each player. 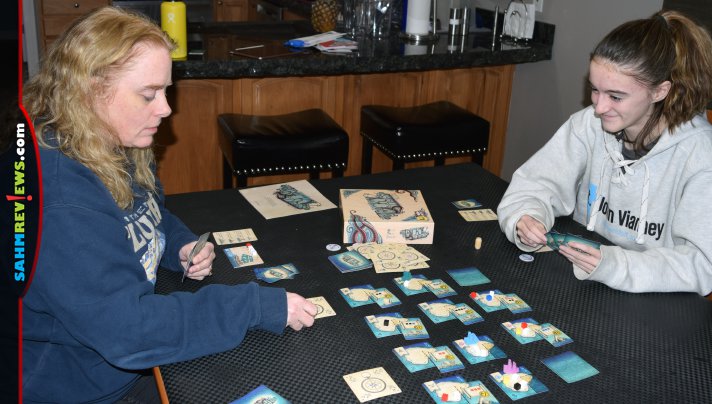 The game will take place over three rounds made up of multiple actions each. Players will play their hands, set sail then pick up OR deliver goods to islands. There are five different types of goods of three different levels of rarity. Sugar (white) and Coffee (black) are the most common, Spice (red) and Silk (blue) in the middle and Gold (yellow) the rarest. 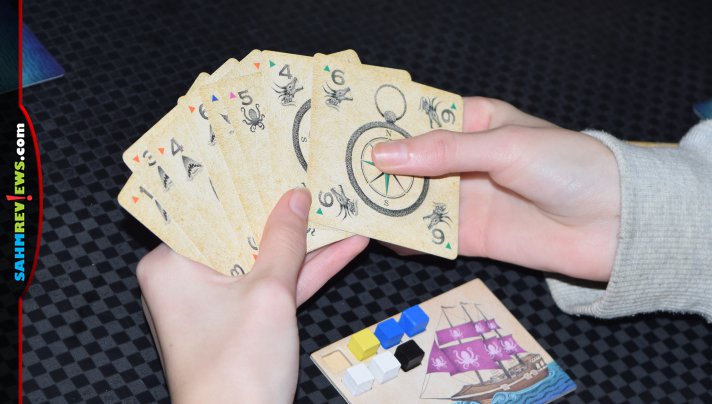 Beginning with the leader, players select and play one of their navigation cards. This card determines what direction you’ll be sailing from your current position. But it’s not as simple as selecting any card. You have to follow the suit (octopus, sea dragon, shark or whale) provided by the leader. If you don’t have any of that suit, you may select any other card from your hand. Cards are ranked and the highest card value of the leader’s suit is declared the new leader. That player takes the rum barrel leader token then is the first to set sail. Everyone else will sail based on the suit and value of their cards. First, all on-suit cards are played in descending order, then the highest to lowest off-suit cards. 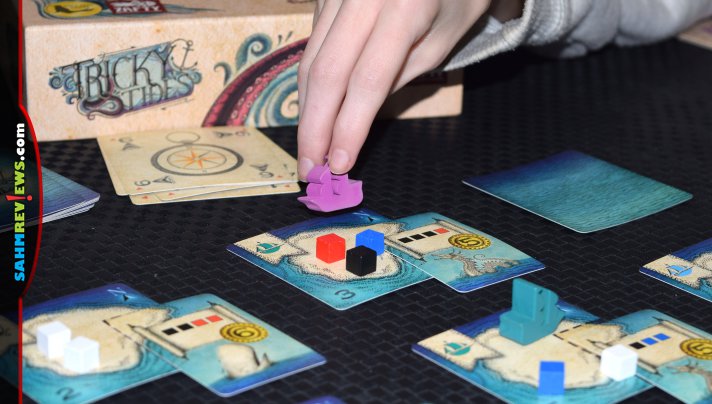 Player move their ships one space in the direction noted on the navigation card. Each card displays multiple directions that are safe for sailing along with directions you may NOT sail due to tricky tides. You must sail if your card indicates there’s an available option so don’t get too comfy in any port! Once per game, you can discard your anchor token and stay put. You’re not able to sail off the map, but since you have to follow the leader’s suit, sometimes you don’t have any other option. In these situations, you remain at your current port. 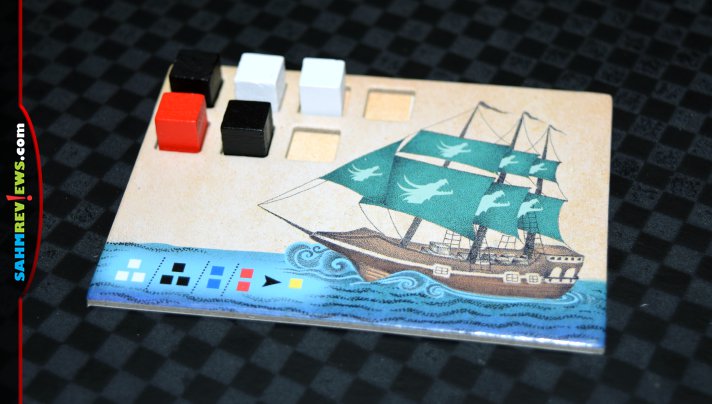 After you have sailed, you may either pick up goods or deliver. In order to deliver, you need to be able to fulfill the entire contract for that island. Pickup involves taking all of the goods of one type and adding them to your cargo hold. After all players have finished their sail and pickup/deliver actions, the new leader plays another navigation card from their hand. The process continues until everyone has two cards remaining. 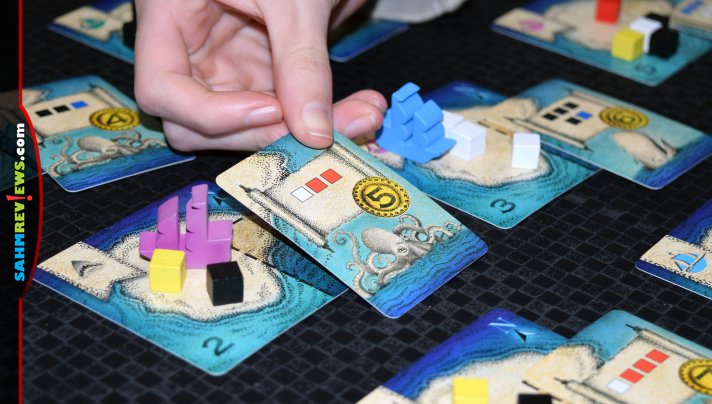 When you are able to complete an entire order, return those goods to the bag and take the order card for the island where you’re docked. A new order card is immediately added to the island. However, goods are only replenished at the beginning of each round so you’ll want to plan accordingly during the six sailing actions each time. When everyone is down to two cards, those are discarded, reshuffled and everyone receives eight new ones. At the same time, all the islands are replenishing goods from the draw bag until they reach the island limit. 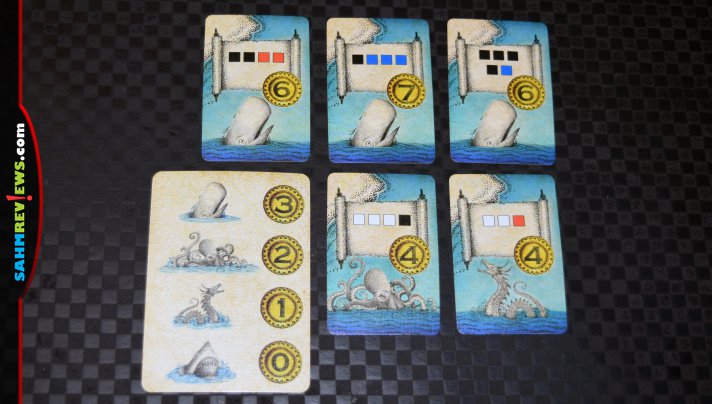 At the end of the third round, players calculate their scores. Tally the gold on the order cards then add additional based on the icons on your bonus card. Finally, earn additional gold for leftover goods. The player with the most gold wins Tricky Tides!

Tricky Tides combines a few different game mechanics (following suit and set collection) so it’s a good option for introducing younger kids to some different concepts. You can increase the difficulty by adding event cards and monsters to the game. If you’re ready to set sail, ask your local game store about availability and watch for it on Amazon.

Will you take a cruise once it’s safe to travel again?