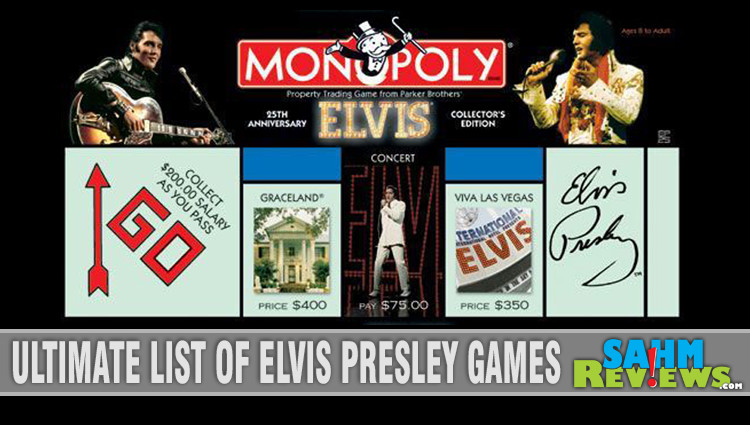 It may be over 41 years since the passing of the King, Elvis Presley, but that doesn’t mean his popularity has waned. In fact, his estate has earned as much as $45 million in one year, well surpassing the $7 million income he took in while still alive.

You can find Elvis’ image on everything from t-shirts to mugs to edible cake toppers?! You name it, Elvis has had his baby face plastered all over it. The board game industry is no different. There have been a number of titles released since his death and one from early in his career! We’ve put together a comprehensive list of them all so you can complete your own Elvis game collection! 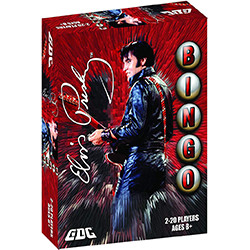 The classic game of Bingo meets Elvis Presley. Once the game begins, the caller selects numbers at random and calls them out. When the caller calls out a number, players place a Bingo Chip on that number (if the number is on the card). The winner is determined when a player completes a winning bingo pattern. 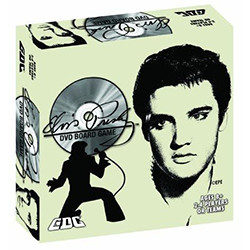 Pay a tribute to the King of Rock n’ Roll! Recapture and relive the life of Elvis Presley as you collect artifacts to create the greatest moments in Rock n’ Roll history! Featuring authentic video footage, images and photos of Elvis that will take you from the Gates of Graceland to Heartbreak Hotel and will leave you All Shook Up! 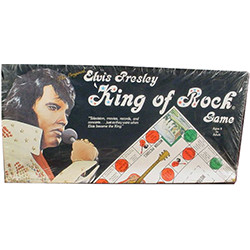 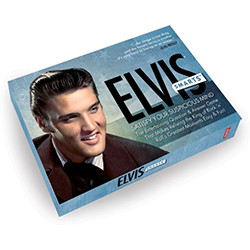 A fabulously fun way to learn about the King, Elvis Presley. Written by experts and designed to teach, this question and answer game covers 4 topics, Legend and Legacy, Music and Magic, On the Silver Screen and On The Road. Also comes with a 12 pages Elvis tip guide and score pad in a sturdy flip top box. 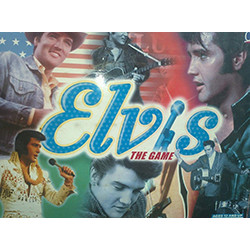 Elvis – The Legend Lives On 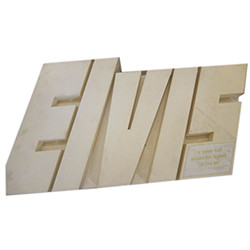 Using tokens that include a blue suede shoe or a teddy bear, players roll and move around the board, hoping to land on enough spaces (or draw enough record-shaped cards) to earn $25 million – in a combination of cash and gold records (which are valued at $250,000 each). Most cards list an accomplishment (“Variety declares Elvis “The King of Rock and Roll!”) or event (Daughter Lisa Marie is born) in Elvis’ life. Many cards let players collect money and/or gold records. Others force them to pay money to the bank. Some send them to specific spaces on the board. Sold exclusively at Graceland. 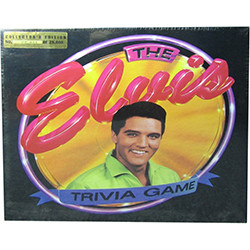 Elvis Trivia – From Tupelo to Graceland 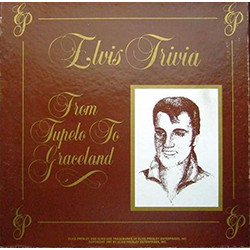 The object of the game is to start from Tupelo and move around the board answering questings pertaining to the life and career of Elvis Presley, until you reach Graceland. The first one to Graceland to corretly answer a final question wins. 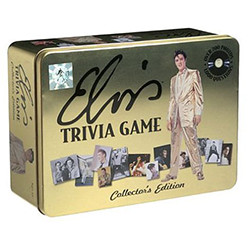 Think you know the King of Rock n’ Roll? What was Elvis’ favorite amusement park ride? (Dodgem cars). Featuring 1,000 questions about Elvis’ boyhood, music and film career as well as his personal and professional achievements, the Elvis Trivia Game, packaged in a collectible tin, is designed for fans to test their knowledge about one of the world’s most legendary performers. Question cards showcase 200 colorful pictures and take players on a photographic journey of Elvis’ life.

Elvis Welcomes You to His World 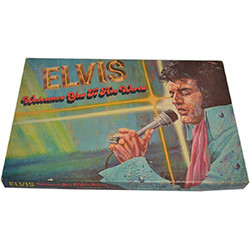 In this game you will experience important moments of Elvis’ life. On the unique guitar-shaped path you may visit Graceland, co-pilot the Lisa Marie and you might even attend his wedding. You may tour different cities following Elvis and his sold-out performances. You may have the pleasure of sitting in on some of Elvis’ movies from the 1950’s through the 1970’s. 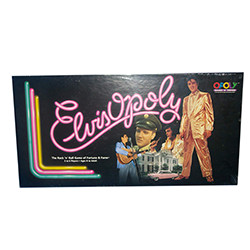 This is a monopoly style game about Elvis Presley. Players move around a board featuring Elvis songs and collect gold or platinum records. Board spaces include Graceland and the U.S. Army. 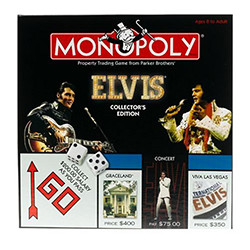 Now Elvis fans can enjoy taking care of business a whole new way! A tender tribute to the King, this Monopoly is like no other. On this gameboard, you’ll travel from a humble beginning in Tupelo to the highlife in Graceland, passing “Don’t Be Cruel,” GI Christmas, Blue Hawaii and other achievements on your amazing journey! Six collectible pewter tokens are a convertible, teddy bear, guitar, leather jacket, vintage record player and signature sunglasses. 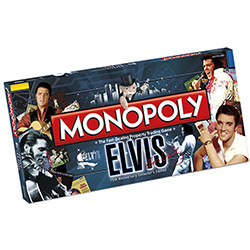 Get ready to rock ‘n’ roll with the King in this special 75th anniversary collectors edition of the Monopoly game. Celebrate Elvis’ music and live performances as you buy, sell and trade his most memorable albums and concerts such as Blue Hawaii, G.I. Blues and the ’68 Special. Recall Elvis’ movie career with music from King Creole and Jailhouse Rock and don’t pass GO without visiting Memphis and Las Vegas in an attempt to build your very own Elvis Empire.For 2 – 6 players, ages 8 and up.Contents Include: 6 collectible tokens: Elvis Sunglasses, Leather Jacket, Guitar, vintage record player, microphone, Elvis Army Dog Tags. 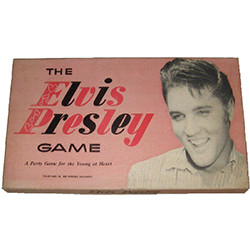 The game requires you to spin a spinner which determines what color card to chose for your question and then answering the question correctly and moving forward on the board or answering the question incorrectly and moving backwards and then having to incur a penalty. The penalties might require you to “walk like Marilyn Monroe” or give your solution to “How would you cheat on an exam?”

The Trivia Game – The Legend Lives 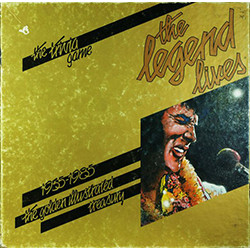 “The Legend Lives” is a special tribute to one of the greatest song artists of our time. All fans and admirers of the former ‘King of Rock’, can now enjoy a trivia game, calendar, agenda, almanac, mini-phone book and agenda, as well as a great puzzle, all loaded with dated facts. 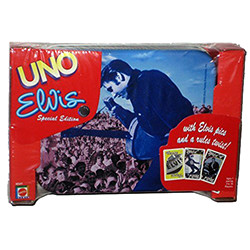 A “Vegas Command Card” changes up the rules over the original UNO! 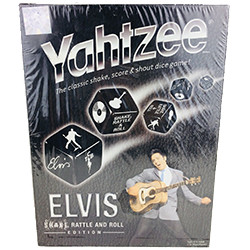 Elvis has left the building-Elvis has entered your home! It’s Elvis Collector’s Edition Yahtzee-shake, rattle, and roll your way into high-scoring Yahtzee entertainment. This collector’s edition is a must-have for fans of the King! Replacing numbers with silhouettes and symbols reminiscent of Elvis, the same rules and game play of regular Yahtzee apply.

From our research, this is the exhaustive list of everything Elvis in the board game world. If you know of any others, feel free to post it in the comments below and we’ll update our list right away!

Do you have any Elvis-themed games in your collection?