Have I mentioned lately how thankful I am that Scott does most of the cooking for the family? Every once in a while, I’ll make something like instant pot Chicken Ramen or Plantation Salad Dressing but the majority of the time, it’s Scott that does the work in the kitchen. I like to act as his sous chef, but he’ll often tell me to get out of the kitchen because I just end up getting in his way. No problem. Burning grilled cheese before we got married ensured that I wouldn’t have to cook a day in my married life and these tactics have reinforced the idea that I don’t belong in the kitchen. It works for me.

Of course, he can’t kick me out this time because we’re all working together to run the restaurant we just opened. That’s the idea behind Kitchen Rush cooperative game from Stronghold Games. Using sand timers as workers, we’re working as a team to seat patrons, take orders, shop for groceries, create meals and clean the dishes. Taking place over four rounds of four minutes, this fast-paced game has given us a new appreciation for what happens when you head out to our favorite restaurants in Bettendorf. 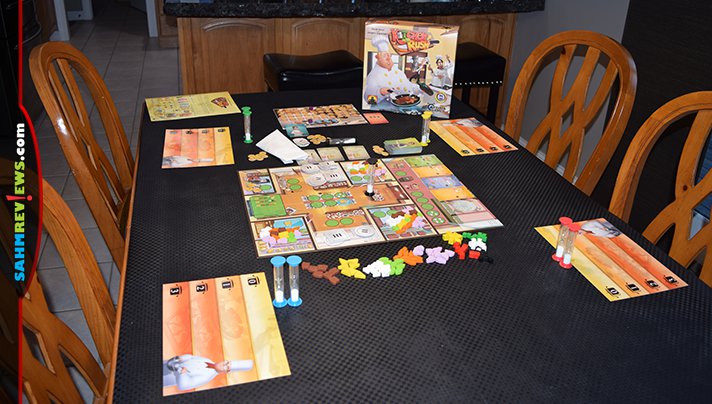 When you look at the picture of the setup, it may look like there’s a lot going on. There isn’t. Well, there is, but it’s not complicated. Like any restaurant, there are just a lot of moving parts with stores of food and spices, clean and dirty dishes, staff and patrons. Place the main board in the center of the table and the scoring board off to the side. Give each player a personal work surface and color-coded timers then fill the main board according to instructions based on the number of players. You’ll stock the storerooms, prepare the spice pantry and seat a few customers. The game takes place over four rounds consisting of four minutes each. These are each preceded by a preparation stage and followed by a cleanup phase. 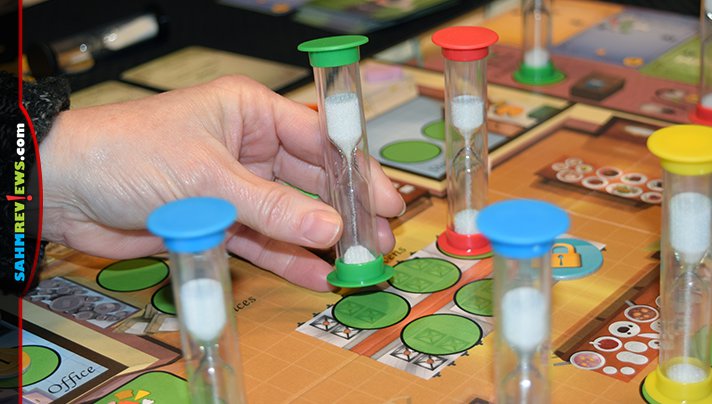 The goal of Kitchen Rush is to fulfill an objective card that is selected during the setup of the game. There are easy ones that focus on serving a specified number of orders, having cash on hand and reaching a designated level of prestige. Harder objectives limit resources or require each player to prepare a number of orders. The restaurant is divided into several sections. There’s the office where you go to drop off tips and get money to go shopping during the shift as well as turn in customer payments and pay the workers when the shift has ended. There’s the area where clean plates are stored and a sink where the dirty dishes go. The ovens are in the center of the kitchen while three storage areas and the spice rack are situated on the outer walls. The front of the house includes a Maitre D’ podium along with a handful of tables for seating the paying customers. What makes Kitchen Rush different from other worker placement and recipe fulfillment games is that all the workers are sand timers. 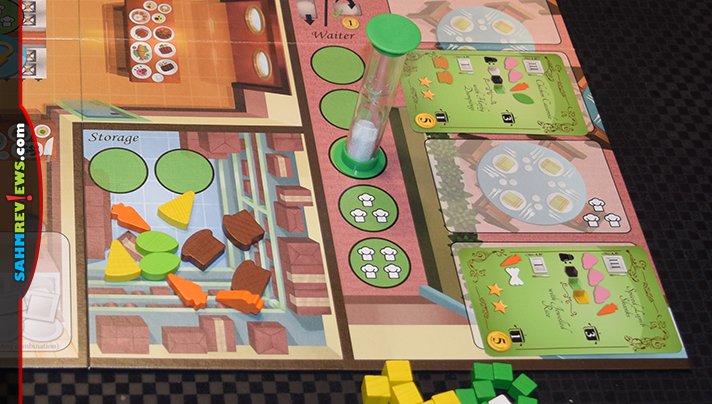 After you’ve finished the preparation phase and move into the action phase, it’s time to hit the ground running. Like a regular restaurant, everyone is working at the same time in a state of complete chaos. The Maitre D’ can seat up to two additional people and earn $1 each as a fee to park their car or not sit them by the restroom…or whatever it is you palm money to the Maitre D’ for. You might also considering having your worker serve as a waiter and take an order from a customer. Bring it back to your work station, grab the appropriate plate from the stack of clean dishes then get ready to head to the storeroom to get ingredients. 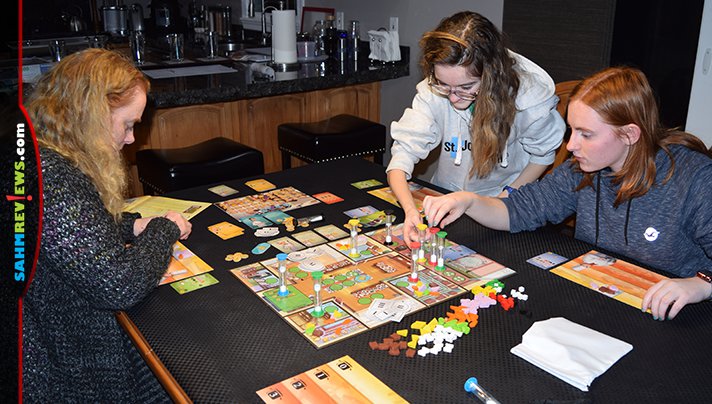 Over the course of the round, each time your timer runs out, you may send that worker to another location. Additional examples are heading to the spice rack to get the proper spices for your order or going to the stove to start cooking your recipe. Not enough ingredients or spices? Get money from the office and head out shopping! For $1, you can purchase five of one type of ingredient, three common spices OR two special spices. Need more? Send another worker! 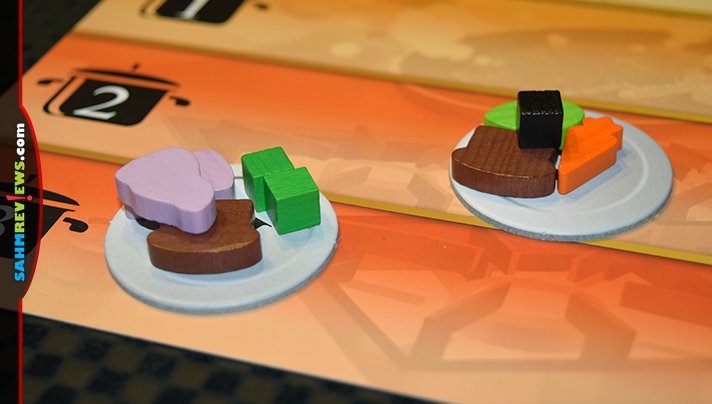 If you’ve managed to complete your order then you can send a waiter out to deliver it early for a $1 tip. Once the timer runs out, you cannot take any further actions and you’ll collect money and prestige from patrons whose orders you’ve successfully fulfilled. Get it wrong or not finish it and you lose prestige. If you ever cause enough errors to fall to -4 prestige, you immediately lose the game. Once you’ve completed the process of checking orders, you need to use that money to pay the staff wages. Failure to do so means unpaid workers walk off the job. They’ll gladly return when you’re able to pay their wages during future shifts. Return all the used ingredients to the supply on the side of the board and dirty dishes to the sink to be cleaned. 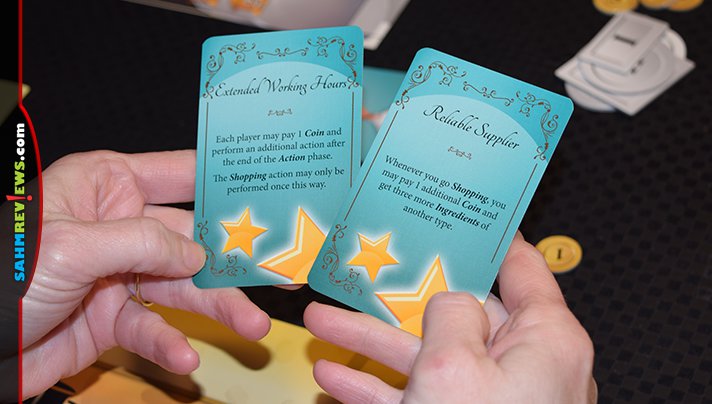 The final step in Kitchen Rush is to check your prestige level on the board. If you’ve met or exceeded the prestige goals on the score board, you’ll earn a prestige bonus card that will help you in future rounds! At the end of the fourth round, check to see if you’ve met all the requirements on the objective card, make sure you have no unpaid Hourglasses and have at least one coin and one prestige. If you’ve managed to do that and not burn down your restaurant then you win!

Kitchen Rush can be played with 1-4 players with setup varying based on the number of players and special rules for solo mode. It can be made easier or more difficult based on the objective card and inclusion of event cards. You can expect a game to last about 30-45 minutes and I’ll have to say that it’s best with kids who are 10 and up. The fact that you’re all over the board and in each others’ way while a clock is ticking is reason enough to not encourage young kids to play. My girls are in high school and we still were tripping over each other. A table that allows each player to sit on their own side of the board probably is best. It’s a lot of fun and has decent replay value. You can start your own restaurant business by ordering a copy of Kitchen Rush from Amazon or check with your local game store to see if they can serve up a copy! If you’re hungry for more, you’re in luck because we’re dishing up a copy of Kitchen Rush for one lucky reader. The timer is running so hurry and enter using the form below!