Has there ever been a product that appeals to you primarily because of the packaging? I remember wanting to order the McDLT simply for the novelty of it. Silly Putty? Genius. And there’s this router with a cool design that is irresistible. All through the years, marketers have used creativity to drawn people to their product. Of course, sometimes it’s also done for practicality and to bring down the price of the product. We saw that with ICECOOL and ICECOOL2 where the box was also the game board. Other times, it’s just to add a little something that makes it more memorable in a sea of similar products. 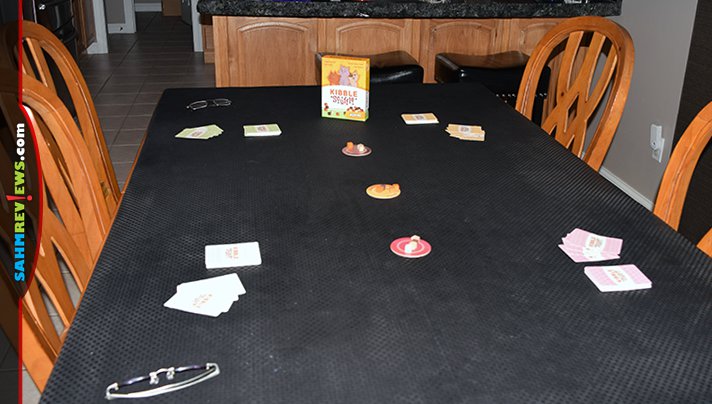 That’s the case with Kibble Scuffle from WizKids. The unique packaging is what drew ME to the game. While there are a multitude of cat-themed games on the market, this is the only one that has you dumping kibble on the table from a pour-spout built into the box. The game involves feeding kibble to your cats and the player who feeds the most, wins. It’s as simple as that. 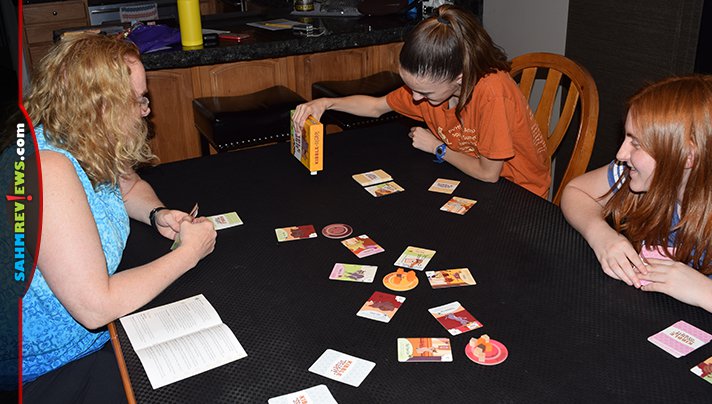 To start the game, each player is given the deck in their designated color. The three food bowl boards are placed in the center of the table with enough spacing to allow cards to be placed around each without overlapping another bowl. The insert is removed from the box so it can be utilized as part of the game. All food cubes are mixed in the box. 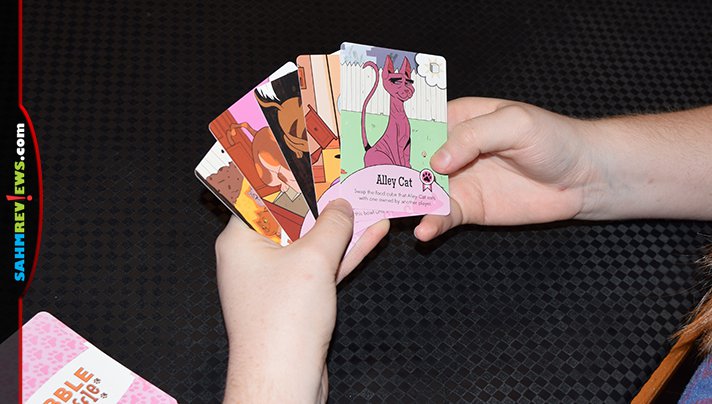 Each player has a deck of 20 basic cards and an additional 5 advanced cards. It’s recommended that you start with the basic set until you get a hang of the game, then incorporate the advanced cards after that. There are two types of cards in each deck: cat cards and item cards. Each cat has unique abilities while the item cards allow you to manipulate where the cats feed, who gets fed and more. You’ll begin by shuffling the entire deck and drawing five cards to form your hand. 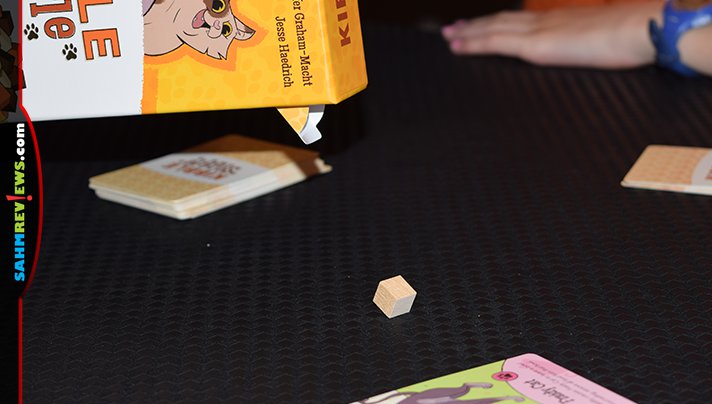 So let’s take a minute to talk about the actual feeding process since that’s what I like most about this game. There are three different types of kibble cubes, each with a different point value. To get them into the dishes, you have to pour them out of the box. I know it’s silly to be excited about dumping something out of a box, but it’s not normal for a board game. Usually you roll dice, draw cards or fish something out of a bag. 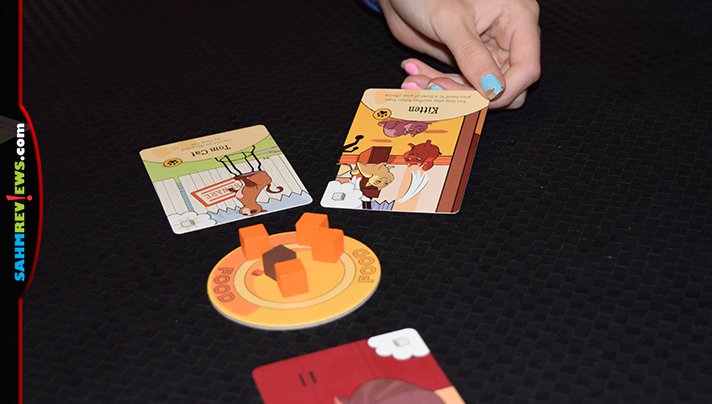 On your turn, the current player plays a card from their hand to any one Food Bowl. This is referred to as the Placement Phase. As soon as a card is played, you resolve its ability as noted on the card. 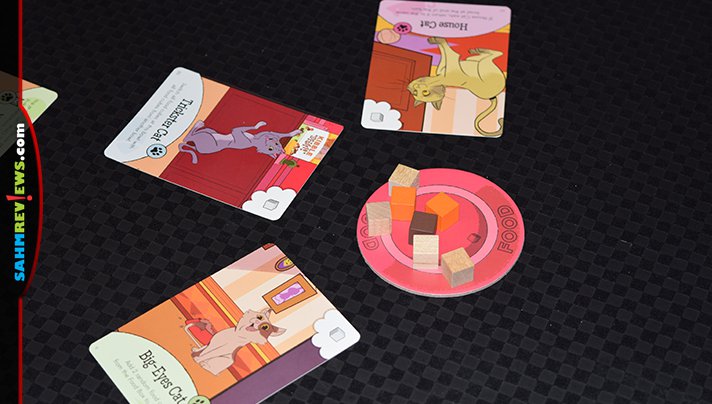 If it causes another cat to move, then the owner of that card is responsible for moving it to another Food Dish, at which time the card’s ability triggers again. This can cause a domino effect of actions that causes cats to move from one dish to another! 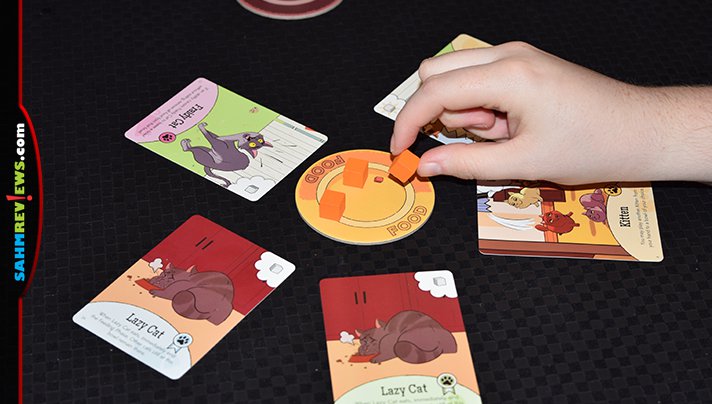 When all card abilities have been resolved, if there are at least 5 cats at a bowl, the Placement Phase pauses and the Feeding Phase begins. Each player collects as many food cubes from the Food Bowls as possible based on their order of priority at the dish, beginning with the current player. Collect a food cube of your choice and place it in front of you. Remove your cat from the dish and place it in your discard pile. Play resolves clockwise from there with each player selecting a piece of kibble. If the bowl runs out of food, the remaining cats are returned to their owners’ discard piles.

After this occurs, any empty bowls are refilled by shaking 4 cubes out of the food box. Before proceeding to the next player, all players draw back up to five cards. This process continues until one player has accumulated 20 points worth of kibble. While playing, we had a few hiccups with the rules that threw us off, including one time where one of the players had no valid cats or kittens to play. I was perfectly happy refilling the bowls with kibble while the rest of the table hashed out how to handle the situation. We basically dropped in a couple house rules to work through these issues. After consulting with WizKids, the designer clarified a little bit of our confusion and a look at follow-up questions on BoardGameGeek confirmed that we weren’t drawing back up to five cards when we should have. We interpreted the instructions to mean you only draw up after a Feeding Phase.

If you’re a fan of cats, this is a purrfect game to add to your collection. You can find copies of Kibble Scuffle on Amazon or direct from WizKids. See what other news is happening by visiting WizKids on Facebook and Twitter.

Are you parent to any cats or kittens?