Nearly every year when we visit relatives in Huntsville, Alabama, we spend a day at the Huntsville Botanical Gardens. We’ve experienced a number of similar parks in other states, but this one is the most impressive and well maintained. Originally we went to check out their huge butterfly house with our pre-teen daughters. Lately we spend more time walking the winding pathways admiring the labeled trees, bushes and flowers.

The Botanical Gardens became the topic of conversation again while we were playing Renegade Game Studios‘ new card game, Arboretum. In fact, it seems we’ve been playing a number of games with a tree theme – Legend of a Cherry Tree, Kodama: The Tree Spirits and Ancestree, to name a few. Am I hinting about a buyer’s guide in the near future? Probably so! 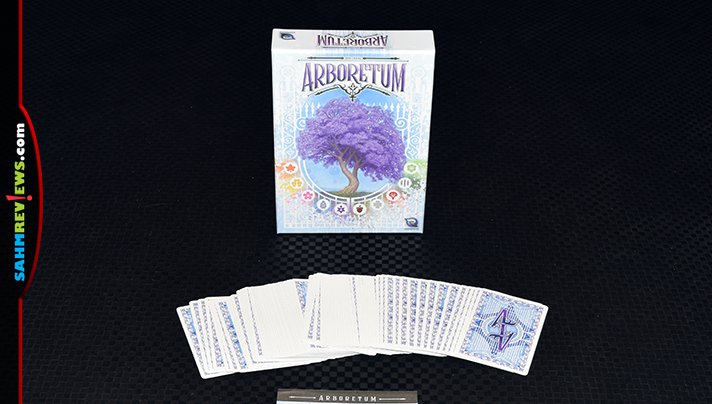 Arboretum is an inexpensive card game about walking along paths where your visitors can take in the various species of trees. There are ten varieties represented in the deck, each with eight cards numbered 1 through 8. Up to four players are dealt seven cards each to form their hand and the rest are put in the center of the play area into a draw pile.

Taking a turn in Arboretum is pretty quick. You must draw two cards from either the draw pile or the top of one of the player discard piles. Then you will play one card to your growing Arboretum and discard one to your personal discard pile. Discard piles are arranged around the draw pile, giving you the option of taking the top card from one or more. There will be as many discard piles as players, giving everyone many cards to choose from.

There is a puzzle aspect to a game of Arboretum. When you’re building your collection, you must always place the next card orthogonally adjacent to another tree. You have to keep in mind the end game scoring rules when planting, and that’s the unique feature of this game.

Since you’re always drawing two cards per turn, playing one and discarding one, you will always have seven cards in your hand. When the game ends by depleting the draw pile, everyone looks at their seven card hand to determine who will get the right to score their path of that tree species. Each tree variety is resolved independently, with the person having the highest valued sum of that particular tree winning the right to score their path. There is a bit of a twist to the scoring in case you were thinking of saving the “8” card. The “1” card nullifies any eight in a hand!

To have a valid path, you must have at least two of that tree type in your Arboretum AND all connecting trees must be of increasing value. This is the only valid path type, and if valid, scores one point for each card in the path. An additional point is earned for each card in the path if they are all of the same type and at least four cards long. Another bonus point if you have the “1” card in your path and two points for an “8”. If you won the right to score, but don’t have a valid path of that species, then you’ll receive no points (but neither will your opponents!). 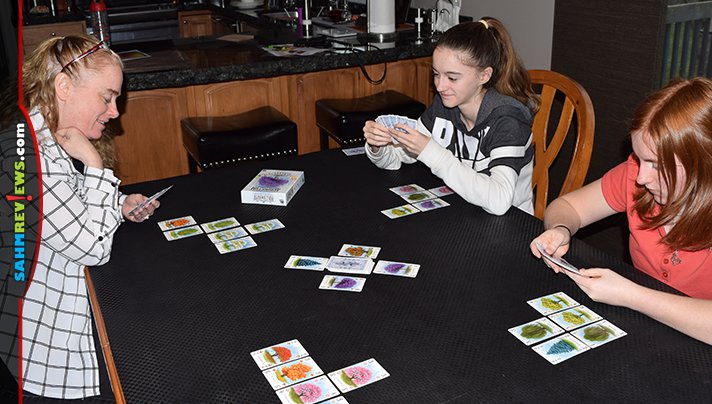 After all ten species have been scored on the included score pad, the player with the highest overall total wins Arboretum! Ties are broken in favor of the person with the widest variety of trees in their Arboretum! The game has a traditional amount of luck found in almost every card game, yet combines a puzzle-making mechanic (when building your Arboretum) to give value greater than the sum of its parts. You can find Arboretum on Amazon for under $20 or spring for the deluxe version with upgraded cards and heavier box for just a little bit more! 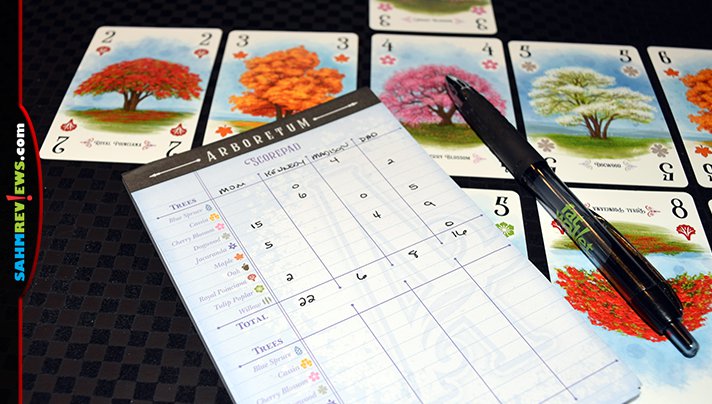 This is another in an ever-growing line of titles by Renegade Game Studios to feature outstanding artwork, solid game play and an affordable price point. Check out their website to see what other familiar games they offer and follow them on Facebook and Twitter to be among the first to know about upcoming releases and details about their TWO Mensa Select award winning games just announced!

Have you ever visited an arboretum or botanical garden?