Oh-em-gee. It’s that time of year again. While we’re currently curating gift ideas for you (including this article), that’s not what I’m referring to with my opening statement. I’m talking about gatherings of people you may (or may not) enjoy hanging around, may (or may not) have anything in common with and may (or may not) have anything to talk about. You know exactly what I mean if you’ve ever had to attend office parties or family get-togethers. So what do you do with your time when you are at these events? I try to be social and talk to people (because that’s my thing) but I always try to pack a couple games that might help fill the gaps in conversation. Yes, you can grab a multitude of different board games (we’ve given you a lot of game suggestions lately), but this list of party games is filled with gift ideas that can accommodate a larger family, more friends or a group of coworkers. Buy it for yourself and bring it along to the event, add it to a white elephant exchange or gift it to someone who is outgoing and will encourage everyone to sit down and play. Don’t lose sight of the fact that these also make great gift ideas for anyone (IE college student) who likes to hang out with a number of people.

We’ve played most of these and have featured several here on the site. If you are looking for more information on how to play a game, look for the

logo and click through. And yes, I’ll say it again that you’ll be able to find many of these in this year’s Mega Giveaway! 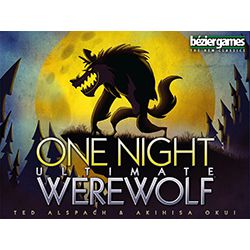 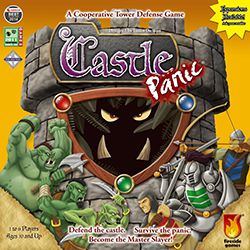 Castle Panic is a great cooperative tower defense board game for the family and the perfect kick-off for your weekly game night.

Work together to defend your Castle from Monsters that attack out of the forest. Trade cards, hit and slay Monsters, and plan strategies together to keep your Castle towers intact.

Win or lose as a team, but only the player with the most victory points is declared the Master Slayer. 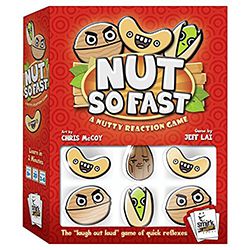 The Laugh-Out Loud Party Game of Quick Reactions! You gotta be lightning-fast, in this wildly nutty game! Flip two cards and watch for exactly four matching nut pictures. If you see a set of four, grab the nut token with the same face, right out from under other player’s noses! But “Nut So Fast”… if a number card appears, players will need to strike the correct Nutty Pose instead. 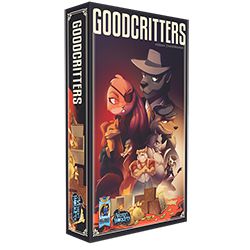 GoodCritters is a game for 4-8 criminal critters pulling off heists and fighting over the loot! Whoever’s chosen as boss can distribute the loot however they like, but it’s the crew that has the final say. If the crew doesn’t like the split, they might just tell the boss to take a hike and put some other critter in charge! In the end, the critter that collects the most valuable stash of loot wins! 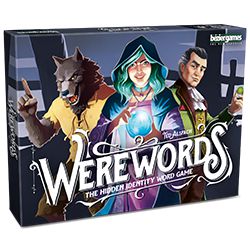 In Werewords™, guess a secret word by asking “yes” or “no” questions. Guess the magic word before time is up, and win! However, someone is a werewolf (knowing the word) working against you. If the word isn’t guessed in time, you can still win by identifying the werewolf! Another is a Seer (knowing the word), but has to be subtle helping; if the word is guessed, the Werewolf can win by identifying the Seer! 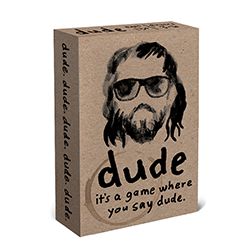 Dude is a game where you say the word “dude.” There are lots of ways to say “dude.” You say “dude” in the way it appears on your card. At the same time, listen for other players saying “dude.” Find players with matching cards to score points and win.

Have you told off a boss? Put on your poker face and watch your friends try to uncover the details. Did you do it as a teen? Was it worth it? The stories they imagine are just as outrageous as the truth!

You and other ‘artists’ want win important title “ONE WHO DRAWS GOOD!” But first must draw many good pictures, show skill. Other annoying painters will guess and try understand pictures. Must gain most points to be big winner and new village Cave Painter. Only then you say… Me Draw Good! 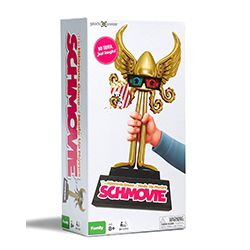 Schmovie is a hilarious and creative family-friendly game for ages 8+ and 3-6 players or teams. The goal is to win trophies for writing funny titles for made-up movies. What would you call an action film about a mutant sandwich? Titles can be parodies like “Beauty and the Beef” or “Toastbusters”, or completely made up like “Attack of the Two-Toed Tuna”. No movie trivia… just laughs! Trade your next movie night for Schmovie night! 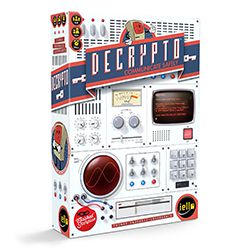 Join in on the mission to become the greatest Encryptor team in the world!

A communication game where players compete in two teams. Each team is trying to correctly interpret the coded messages presented to them by their teammates while cracking the codes they intercept from the opposing team. 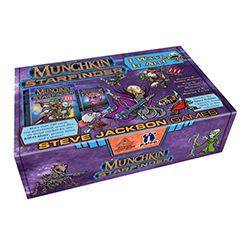 Get everything in the Munchkin Starfinder universe! Within this box, you’ll find every physical product unlocked and released during the Kickstarter campaign, including items that will not be available anywhere else! To prove you’ve got it all, you’ll get a certificate with spots for signatures from Steve Jackson, Howard Tayler, and Andrew Hackard. Plus, the box comes with its own Munchkin Starfinder rule! 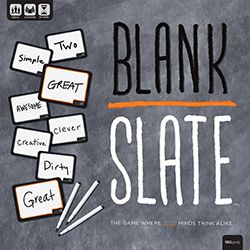 Pick one of over 250 Word Cue cards (with 500 total cues), write the word you think best completes the phrase – and try to match it exactly to another player’s word without giving a single hint.

The Island of Doctor Lucky 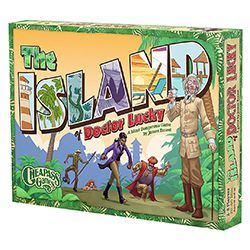 Award-winning classic Kill Doctor Lucky gets a tropical spin in this new stand-alone game! You’re still bloodthirsty enemies of despicable philanthropist Doctor J. Robert Lucky; but this time, you’re trying to kill him on his mysterious tropical island. Attempt murder the old fashioned way, or use of the new Hazard cards to hit Doctor Lucky and other players from anywhere else on the map! If you play your cards right, you can kill Doctor Lucky! 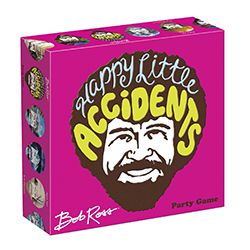 Happy Little Accidents is the game where your mistakes become your masterpieces! Celebrate your creativity in this positive party game inspired by the wisdom of legendary painter Bob Ross. You will surprise yourself by transforming abstract shapes and squiggles into charming pieces of art. Then share your clever doodles and award points to other players for their inspired creations. 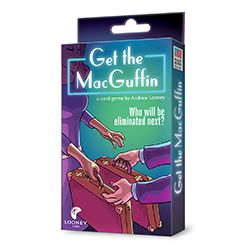 Get the MacGuffin is a quick game where players must make clever use of a limited hand of cards ranging from ridiculously powerful to just ridiculous. A calculated risk might gain you the coveted MacGuffin, but can you hold onto it until the last card is played? Is the MacGuffin even out there at all?

Are You Dumber Than a Box of Rocks?

Draw a card, pick a category, shake the box, and open the top. Who has the correct answer: you or the rocks? This quick play trivia race asks the obnoxious question: are you dumber than a box of rocks? 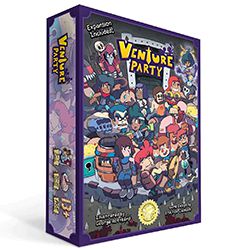 Venture Party is a fun and simple, 3-7 player, hand management game. Fantasy themes and RPG tropes are turned on their heads in this game full of clumsy and unfortunately ill-fated heroes. None of your characters in Venture Party are very skilled; whenever they try to help, they get themselves killed! The land is ripe with opportunity, and only one Venture Party will come out on top. Will it be yours? The one catch? 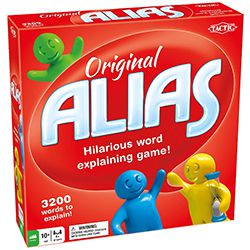 A game that makes people talk! Over five million copies of Alias have been sold worldwide! See what all of the Alias excitement is about. Pick a card, check the word and start talking — the idea of Alias is to explain as many words as possible to your teammates. The more words they guess right, the further you get to move on the game board. Original Alias contains words from every thinkable category and difficulty level! Includes 3200 words and 400 cards!. 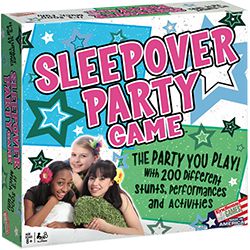 Break out the sleeping bags and leave the lights on. Its a SLEEPOVER PARTY and were staying up late! Spin the spinner and attempt to complete one of over 200 ACT IT, WORK IT, or PARTY Challenges. Being silly and having fun is the name of the game at this Sleepover, so be prepared to sing, laugh, perform, and make a general fool of yourself! Don’t fall asleep early, or youll miss out on earning the most cards and staying up all night! 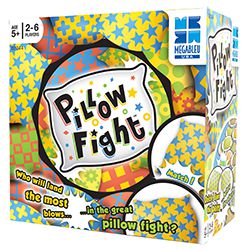 The fast and furious pair-matching game! Be the first to spot a pair of pillows and deliver a blow to your opponent! Who will land the most blows in the great pillow fight? Players simultaneously search for matching pairs of pillows, then throw those pillows at their opponents. When all the pillows are gone, the player with the fewest cards wins! 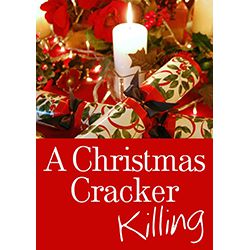 With Christmas fast approaching, the local elite have made their way to Trimming Mansion, for their yearly Christmas dinner party. The dinner party is tinged with sadness, as the billionaire bespoke cracker manufacturer Buster Kracker, in whose house they annually met, died in the autumn. His last wishes were that the annual Christmas dinner party went ahead unhindered. Fulfilling this final request his wife Paula has invited all the guests Buster wished to be present. However, Buster Kracker did not die of natural causes. He was murdered, and one of the guests is responsible. Will you figure out who?

Still have some items on your shopping list even after this guide to party games? Visit the list of family games, a grouping of STEAM and educational games and toys, our summary of great games for teens and adults, the card games and dice games, game ideas for little kids, puzzles for all ages and even stocking stuffer ideas. Stay tuned because there are more guides filled with gift ideas that are still to come! 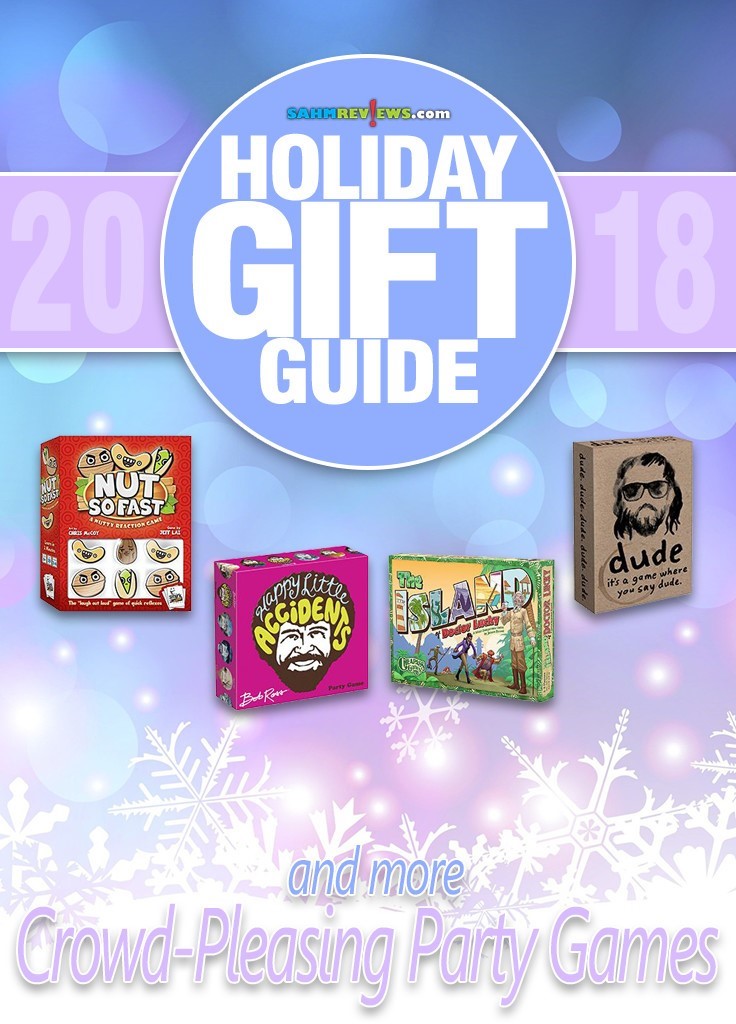