If you’ve played a few board games other than Monopoly, you’ll probably recognize the designers behind Outpost: Amazon right away. Jonathan Gilmore is widely know for his work on Dead of Winter, Atari’s Missile Command and Centipede, Dinosaur Island and Wasteland Delivery Express Service. Daryl Andrews, the game’s co-designer, has had games featured on SahmReviews a number of times, including Caffeine Rush, Fantasy Fantasy Baseball and Space Invaders Dice (and the upcoming feature for Sagrada!). When we discovered that the Outpost series was created by this duo, and it was a cooperative title, we knew immediately it had to come home with us.

In Outpost: Amazon by IDW Games, you and up to five other scientists play as members of a team of researchers stationed deep in the heart of the Amazon. Your original assignment was to collect and report on the various exotic plants and creatures native to the area. But reports show that locals have been moving away from the riverbanks and night vision surveillance has captured photos of something unexplainable. It has been decided to evacuate the facility and your team must make their way down the river to the coast, where a rescue ship is waiting. To be successful, everyone must make it to the ship alive! 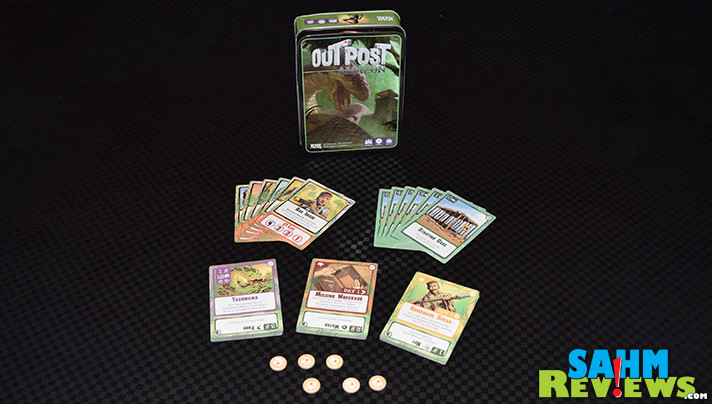 You have the option, when setting up the game, to choose how difficult you’d like to make your experience. An equal number of Bad Event and Good Event cards constitutes Normal difficulty. More Good than Bad makes the trek a bit easier. Attempt to populate the deck with more of the Bad Event cards and you’ll find the expedition through the forest much more difficult! A total of twelve cards from the two decks are shuffled with the deck of Threat Cards and create your Expedition Deck. The remaining Event cards are turned 180° and shuffled together to make your Outpost Deck. These turned cards represent your Combat Value when in your hand or Goods when on the table. That will make more sense in a minute. 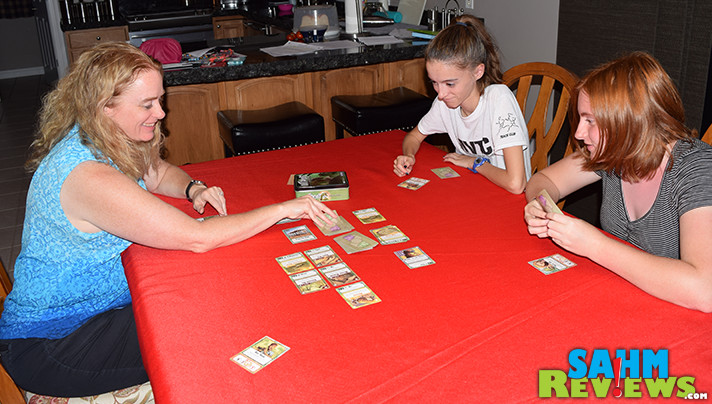 All players choose one of the Character cards to play as, each with their own special ability and health value. A round of Outpost: Amazon consists of all scientists taking one complete turn, and the group can decide in which order to go. On your turn you will resolve five phases before passing the torch to the next player. 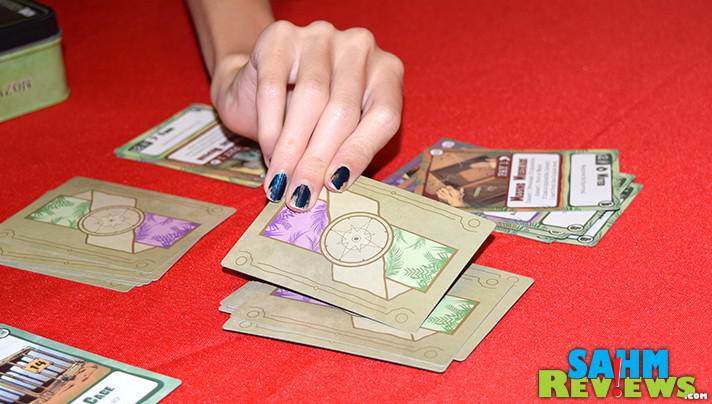 The very first thing you do on your turn is draw three cards from the Outpost Deck. Choose one to keep in your hand, one to play to the table to a community supply area and discard the third. Next you’ll take one or both optional actions – use the cards in your hand to attack threats and/or use any of the available equipment cards in the supply to capture threats, heal other players or even build new cages to hold your captures! 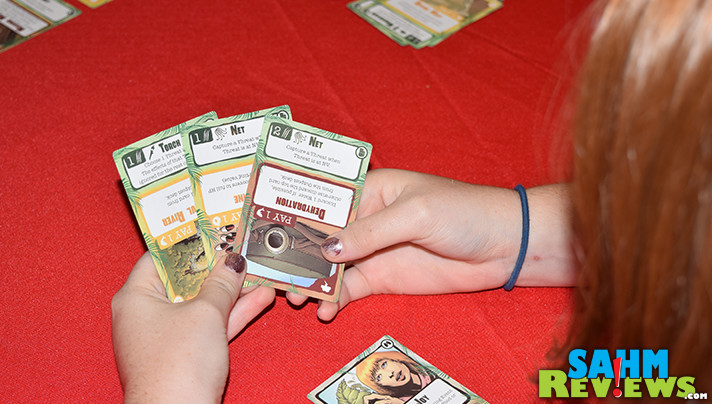 Once you have played as many cards from your hand or the supply area as you wish, you must now draw (and endure) an Expedition card. This might be a new threat to add to the pool, a Good Event or a Bad one. Threats are added to the Threat Area and one person who has not had a turn this round receives damage equal to the Combat Value on the Thread card. When an event is drawn, a fee must be paid or one of the team members must lose one point of health. Once paid for (in either manner), the rest of the event is resolved immediately. 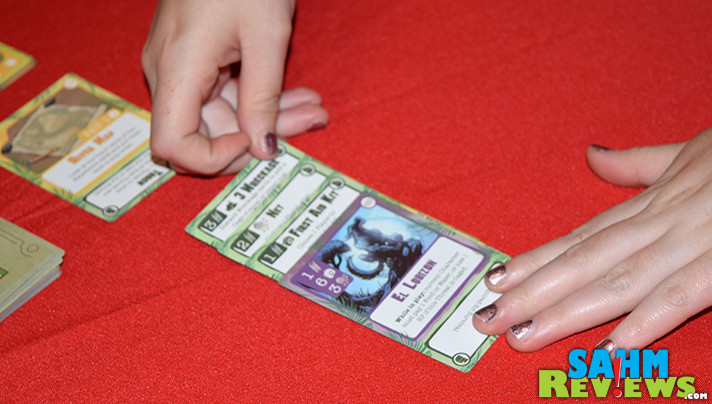 After all players have taken their turn, any effects from the Threats that happen “at the end of the round” trigger and the next round begins in the same manner with turns happening in any order the team wishes. You must closely manage the Threats by either killing them (by playing enough cards to meet or exceed their health value) or capturing them (reduce their health to half, use a net to capture and put them in a cage). Cage sizes are important to keep an eye on also. Each cage can only hold a certain number of animals, dictated by their size. You cannot capture a Threat if you do not have enough room to cage it! 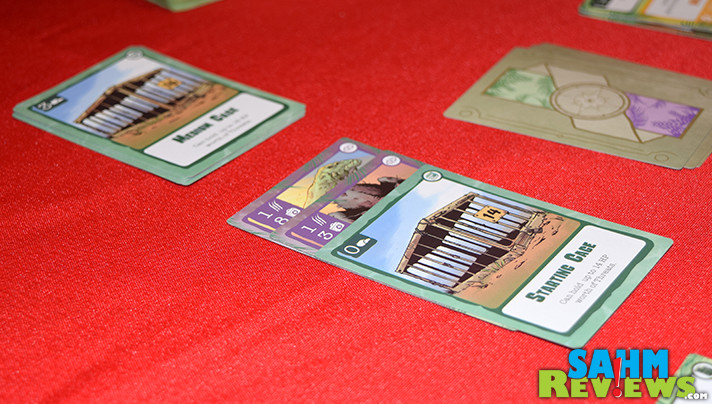 You might be asking why you would want to capture one instead of just removing it from the game. Your final score is determined by the number of captured specimens you escape with. A perfect score of 90 is almost unattainable, while a low score demands you try again and be less savage! All of this assumes your team is successful in reaching the escape vessel. If at any time during the game a person’s health is reduced to zero, the game ends immediately and everyone loses!

A very challenging game especially at the more difficult levels, your adventure begins on Amazon for under $15! If you’d like a different setting but with the same general gameplay, you can still find copies of the first in the series, Outpost: Siberia online or at your favorite local game store. What’s next in the Outpost series? You’ll have to follow IDW Games on Facebook and Twitter to find out!

Who is your favorite game designer?