At some point about 2-3 months ago, my oldest daughter and I were perusing the Xbox Live Games with Gold offerings. Semi-monthly new games appear on the list to download for free or to purchase at a discount. On this occasion she got very excited to see a bright red outline of a human on a white background. The game was called SuperHot. I knew nothing about it, but it seemed that Madison did. She explained that all her friends were playing it and she would love to try it out. Of course, it wasn’t one of the free games, but it was available at a discount. I couldn’t pull her away from the Xbox that entire weekend.

We’ve both played a number of 1st-person shooters over the years (heck, my first one was Castle Wolfenstein 3D back in the early 90’s), but SuperHot was unique. It didn’t profess the best graphics, instead choosing for a voxel-styled world. What was unique in that the game was played in real-time – and yet it wasn’t. Instead of moving through the game with the world also existing around you, time only moved when you moved. This added a new dimension to a typical shooter. You could take your time planning out your next move instead of worrying about being overrun by enemies if you hesitated. 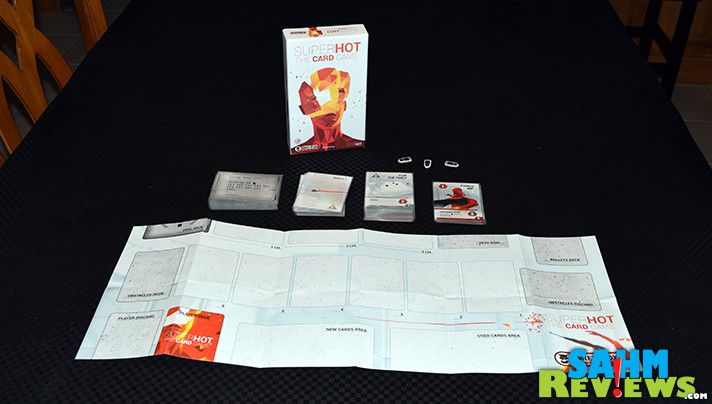 Last week while were were attending the Geekway to the West convention, SuperHot again caught Madison’s eye. However, it wasn’t the video game this time! Prominently displayed in Grey Fox Games‘ booth was a shiny new copy of SuperHot – The Card Game. It was making its debut at the con and wouldn’t be available at retail until the following week. Needless to say it also had to go home with us.

What we quickly discovered was that SuperHot was a true offline rendition of the online version. Designed for just one player (although there are rules included for up to three, if you’re so inclined), it is billed as a micro-deckbuilder. This piqued our interest as we weren’t exactly sure what that could be referring to, but as we soon found out, SuperHot has a unique twist on the deckbuilding genre. 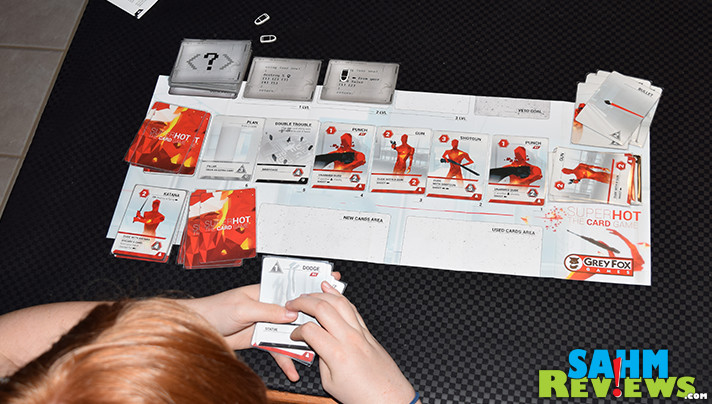 A game of SuperHot is played over three levels (rounds) of increasing difficulty. Setting up your play area is as easy as shuffling together the Goal cards, Obstacle Cards and your eight starting cards into their own decks. From the Goal deck you will draw one card and lay it face up in the designated space. This is the goal you must complete in order to proceed to the next level. The Obstacle deck is also placed on the board and six cards are dealt out in a row, creating what is called “The Line”. Lastly, from your eight-card starting deck you will draw four cards for your first hand. The only other cards needed are the Bullet cards, which are also placed in their labeled position on the play area. 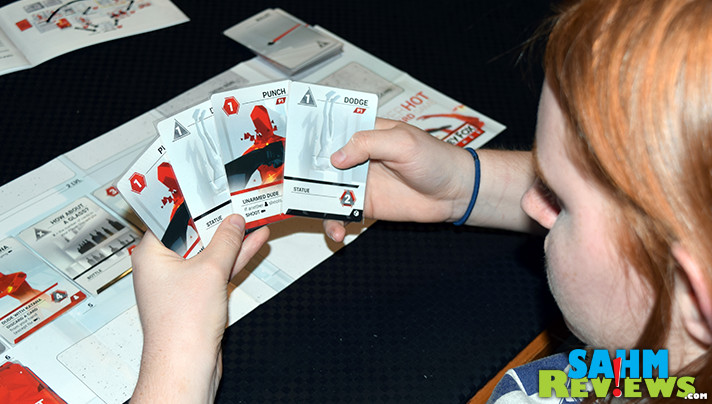 Obstacle cards serve two purposes. When they are in “The Line”, the bottom of the card will affect you if you do not destroy or knock them out (or maneuver past). As in the online version you are trying to both dodge and destroy the enemies in your path – which in this game is “The Line”. You will begin your turn by deciding whether to Wait (pass your turn) or Move (play cards from your hand). By moving (and therefor time progressing), you will play cards from your hand with matching symbols to the cards on the board in an attempt at destroying them or knocking them out. You must play values equal to or exceeding the number on the bottom of the card in The Line and then decide whether to simply knock them out and turn them face down or to destroy them completely. Destroyed cards are put into the New Card area, while knocked out cards remain on the board until you sneak by them. 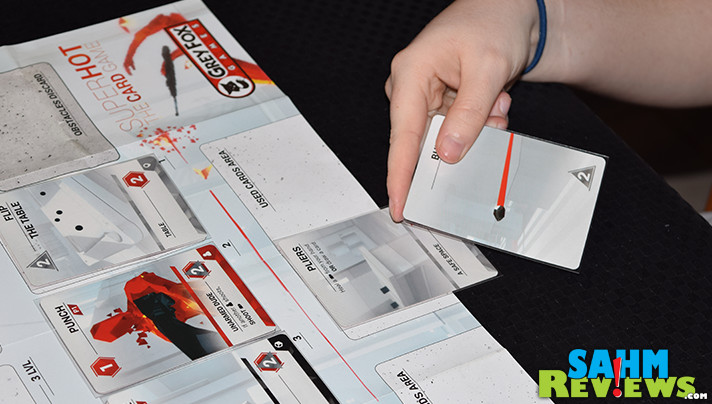 After you have played as many cards from your hand as you wish, you will take any cards in the New Card area and immediately add them to your hand and draw back up to four cards if you don’t have that many (or more). You will then count the total number of cards played (in the Used Card area) and sneak by that many places in The Line. Those cards will then also be removed and placed in Player Discard area, which will eventually end up in your hand when you draw. 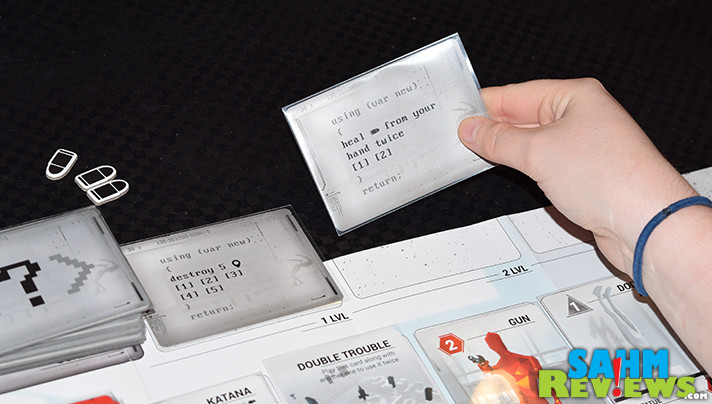 Now check the goal cards at the top of the board and see if you have completed all of them. If so, it is time to move on to the next level. All cards are collected and reshuffled and new goals are drawn. This time you will have an additional goal (three in the final round) that must be completed before progressing. Once you complete the third level and all three of its goals, you have officially won SuperHot! If the goals are still open, move on to the next step. 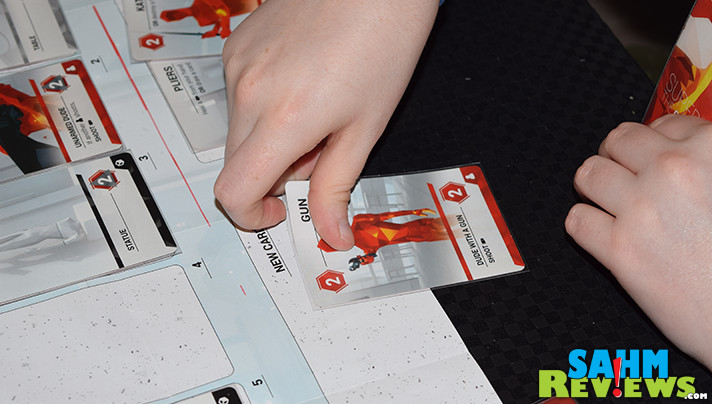 Any cards remaining in the line that are face-up will now activate and perform whatever action is listed on the bottom of the card. Some may do nothing, while others will shoot at you. When that happens, you will take one of the Bullet cards from the pile and add it to the Obstacles Discard pile. These will eventually make their way through The Line and hopefully be destroyed before they end up in your hand. At any time if you have four Bullet cards in your hand, you immediately lose the game. You will also lose if the last Bullet card is drawn and added to the discard pile (did I mention there are many ways to lose and only one way to win?)!

Lastly, refill The Line by sliding any remaining cards all the way to the right and filling it up from the deck. Again, if there aren’t enough Obstacle cards remaining to fill The Line, then you lose. Begin your next turn in the same manner as before by deciding if you’re going to Wait or Move (pass or play). 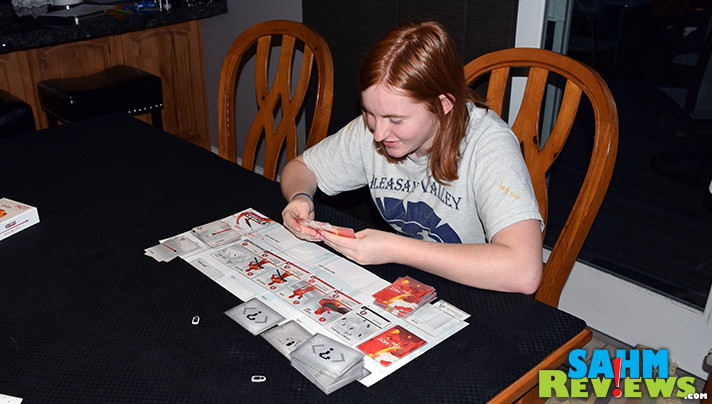 What makes SuperHot different is the way the deck of cards move around. Most deckbuilders have you adding cards to your deck (or removing them) so you can build up combinations and redraw them quicker. In SuperHot, your played cards will first go through The Line before they return to your hand through destruction or maneuvering past. So those who excel at visualizing the cards in their deck will have to change up their strategy since your best card may not be available for a while!

We were truly surprised at the MSRP of only $20 on this officially licensed product. Most others in this category fetch quite a premium when a licensed brand is attached. That’s not to overlook the satisfying game play – winning a round of SuperHot is NOT easy and should easily provide many multiples of value while it is in your collection.

You probably remember Grey Fox Games from our other features about Harvest Dice or Deception: Murder in Hong Kong. We got a sneak peak at some of the games they are releasing this year (including this one) at Geekway to the West and are excited about the direction they’re headed! If you want to stay on top of their news, head on over to their website and follow them on Facebook and Twitter!

Have you ever played the video game SuperHot?