You’ve heard this story over and over again, but I’m here to tell it one more time. A few years back, Scott discovered a local game meetup and we decided to give it a shot for some good, clean, family fun. Yes, the same event that we still attend weekly and one that few non-adults attended until we became regulars. But little did we know that attending would equate to a recognition that we not only needed to teach our girls the value of a lie, but also encourage them to do it well. How many parents do you know encouraging their kids to master the art of lying.

“I’m teaching my girls that they’ll need to learn to lie if they want to win.”

We have fond memories of some of the first non-mainstream games we played. We’ve offered a Castle Panic game overview and shared about Fluxx, but we’ve never given an overview of one that shed a bright light on my lack of a poker face. We included Sheriff of Nottingham in our holiday gift guide a couple years ago and have mentioned it in overviews of other bluffing and hidden role games. The time has come for me to fully confess that I am teaching my girls that they’ll need to learn to lie if they want to win. 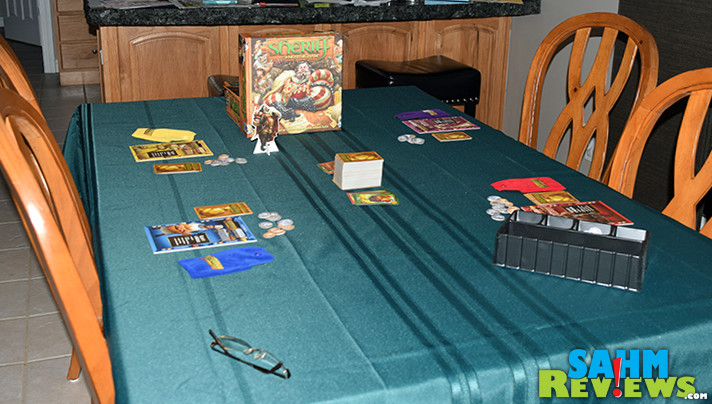 Sheriff of Nottingham is a bluffing game from Arcane Wonders. It’s a staple of their product line and they even have someone who shows up in costume for events such as Gen Con. Our first introduction was with the base game, but since then their Merry Men expansion has been released to add even more depth. More on that in a minute. First I want to explain the basic premise behind Sheriff of Nottingham. 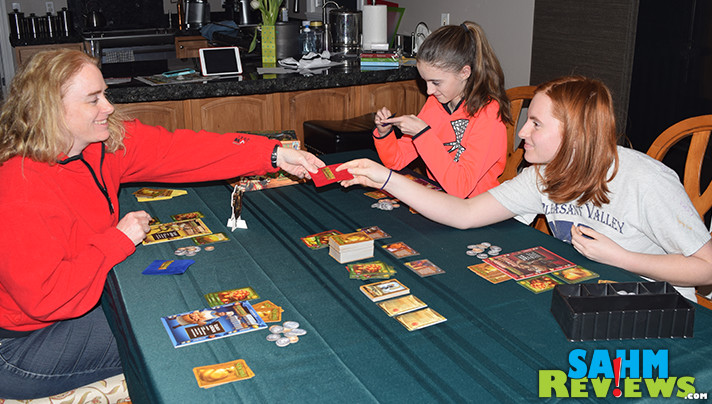 The base game of Sheriff of Nottingham can accommodate five players, six with the expansion. In the game, you and the other players are acting as merchants who are attempting to stock your stalls with goods for the law-abiding citizens (as well as some that might be a bit on the shady side). The Prince has such high taxes that it’s difficult to make a living! Unfortunately, the sheriff is suspect and has started to question merchants on whether contraband is being smuggled into his realm. Not because he’s concerned, but because he’s trying to grab a piece of the pie for himself. Thankfully, you know that he’s greedy and a bribe here and there might just get him to look the other way. Key word being might. 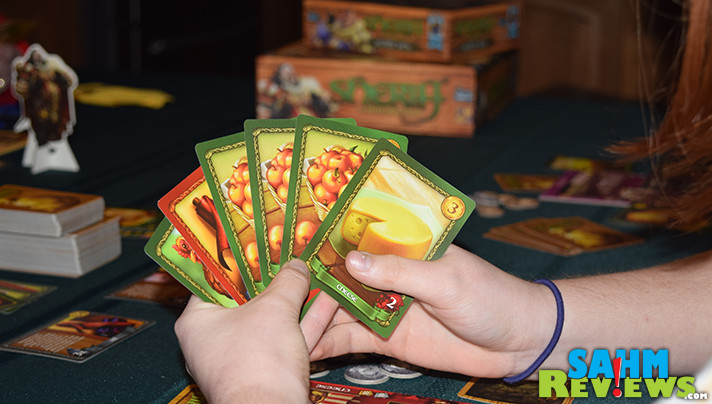 Players take turns acting as the sheriff with that task rotating each round. A round consists of four parts. Players participate in the market, load merchant bags, declare their goods and are subject to inspection. At the end of the round, the task of sheriff shifts to the next player and the process continues until each player has been the sheriff twice. Each player begins the game with six Goods cards. During the market phase, players may discard up to five of their cards and draw that many from the discard or stock piles in the center of the table. This is important because what you have in your hands are the goods – both legit and contraband – you’ll be trying to get past the sheriff. Have a handful of contraband and no poker face? You may want to ditch some of those for something a little safer.

From your hand, you’ll load one to five cards into your merchant bag. These are the goods you’re planning or hoping to sell in your merchant stall. Once all players have prepared their bags, players take turns presenting to the sheriff for possible inspection. As you pass him your merchant bag, you can opt to bribe him not to open it but that doesn’t mean he’ll honor your request. Truthful or not, you declare the type of one kind of good that you have in the bag along with the total quantity of goods. (IE You put a cheese, 2 chicken cards and a contraband into your bag. You declare “four chickens” are in the bag.) 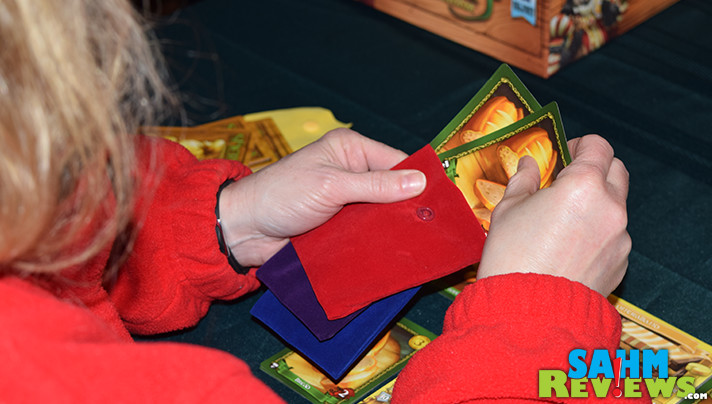 If he believes you, he simply passes the card back to you. If he inspects your merchant bag and you were truthful, he owes you the value of the cards because he wrongfully accused you. If he was correct that you were attempting to smuggle in contraband or not declare legal goods, not only do you lose the contraband and undeclared goods, but you owe him the penalty listed on each forfeited card! Someone like me has a tendency to play honestly and work to maximize bonus points in my own market in addition to bribes when I’m sheriff. It’s difficult, but totally doable.

After each player has been sheriff two times, the merchant values on the merchant stalls are calculated and a winner is declared. Being able to lie about what is in your envelope is important, but learning to read whether others are lying to you is key. Someone who feels they can slide something past you may smuggle some high end contraband! 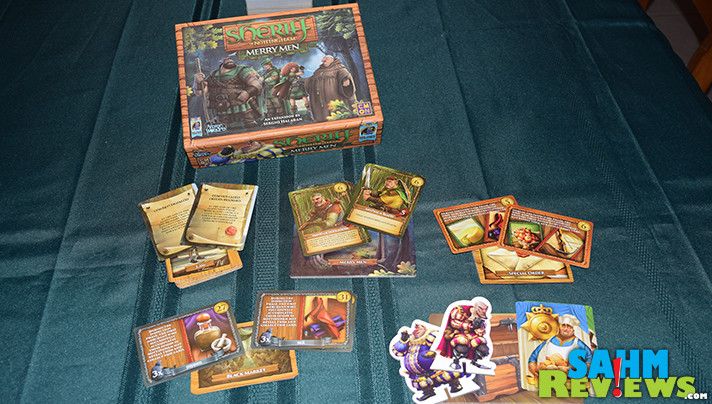 So what does the expansion bring to the table? A lot. When a lot of people hear “Nottingham”, they think of Robin Hood and his Merry Men. The expansion by the same name includes a variety of features and components that can be added individually or in a group to put a new spin on the base game. The first component is the addition of a sixth player used in conjunction with two Deputies instead of a single sheriff. In addition, there’s a Black Market, Laws and Special Orders. With the deputies, basically it’s a team of two people acting as the sheriff allowing them to take action as a team, individually or not at all following rules similar to that of the sheriff in the base game. 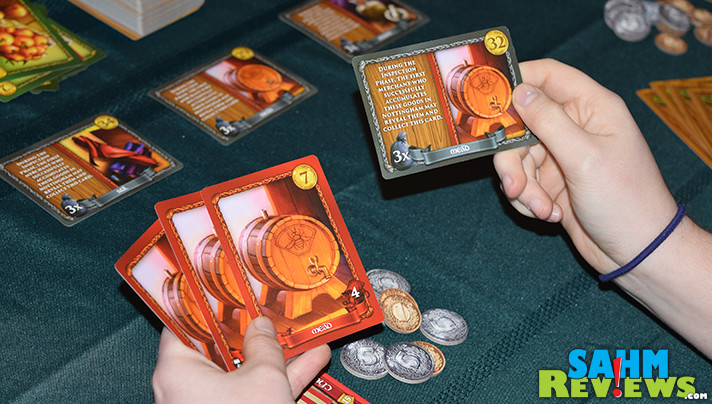 The other three aspects completely change up the game quite a bit. With the Black Market, players are able to claim bonus points by filling Black Market objectives using Contraband. So if you’re like me and usually play a clean game, this adds an element to the game that pushes me to push my limits. Along this same line are changes caused by the Law Cards. While chickens might be fine one round, they may be Contraband the entire next two rounds! A new law is added and one dropped each time there’s a new sheriff/deputy. Finally, there are Special Order Cards. During the Inspection phase of a regular round, players can fill Special Orders using cards in that Merchant Bag. Once again, this is another reason to encourage playing a villain. After all, nice guys finish last… even in Nottingham. So what do you do in order to win? Do whatever it takes. Oh, and add “smuggle people” to the list. The final module of the expansion involves the Merry Men themselves whom you are attempting to smuggle into Nottingham. People, isn’t that the ultimate degree of Contraband?! You receive gold based on the value of each character and also are awarded an instant benefit as noted on the card. The catch is that in order to get additional Merry Men, you need to earn their trust by successfully smuggling Contraband.

Despite the idea that we’re teaching our kids to lie, bribe and smuggle contraband, I think they’ve learned a lot about themselves and other people in the process. The underlying message is that it’s just a game. And a fun one at that. You can find Sheriff of Nottingham on Amazon for around $25, the Merry Men expansion for under $20 and can even add the Sheriff of Nottingham companion app to help keep the game on track and assist with scoring. See what other releases Arcane Wonders has in the works by following their social channels (Facebook, Twitter). Senshi is due out in May and you can expect to see Critical Mass in July. We hope to bring you overviews of those games when they are available for purchase.

How do you feel about teaching kids to lie?