Last week I was softly complaining about games that are nothing more than a remake of a classic title and only adding a minor tweak or two to try to make it a better game. My example was Make 7, a knockoff of Connect 4 with a math element. It did add the need to sum up your row until it totals seven, but in the end you were still dropping tiles in a contraption, trying to line them up.

This week’s thrift treasure does something similar in that it ‘borrows’ its main mechanic from a classic game. Yali is an abstract game that very closely resembles a 2-player round of Chinese Checkers. You know, the game where you move or jump marbles, trying to get them all to the other side before your opponents do. That is exactly the goal in Yali, but with a twist that makes the game unique enough not to ruffle my feathers. 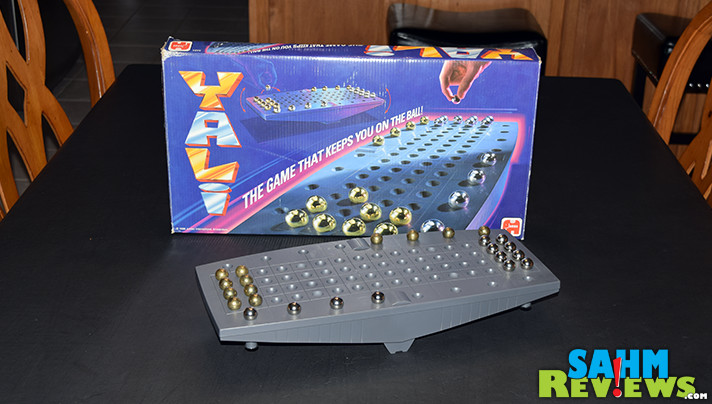 Yali is designed for two players only, each receiving twelve steel balls (silver- and brass-colored). The playing board is made of plastic, resembles an aircraft carrier and teeters on a connected base. To set up the game, each player puts eight of their balls into their designated starting area, with the remaining four balls being lined up along the edge on the opposite side of the playing area. 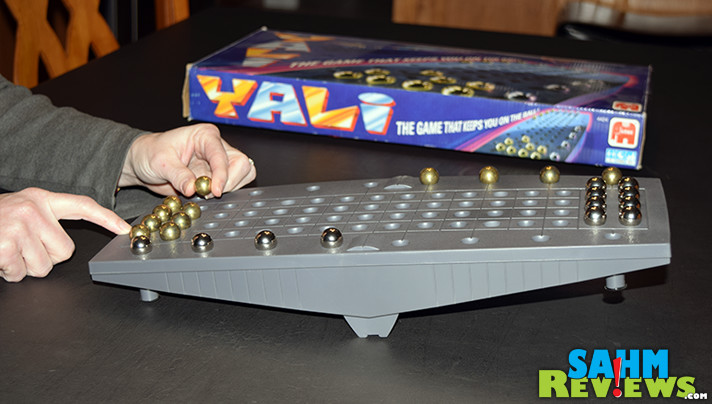 Starting player is randomly determined and that person begins by putting their finger on their side of the board, forcing it to tip towards them. They then choose one ball to either move or jump forward. A ball may be moved one space forward or jumped as many times as possible as long as there is one ball between them and an open space (just like Chinese Checkers). The board is then released, and if it tilts towards your opponent, your turn is over. 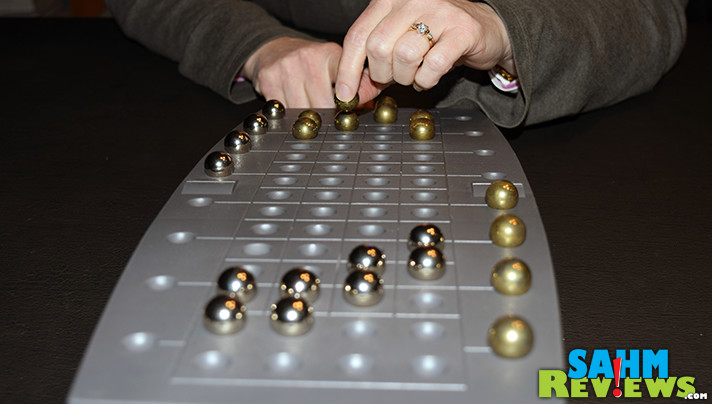 If it remains tilted towards you or is evenly-balanced, then you may take another turn. This continues until the board rests tilted towards the other player, then they get to take their turn in the same manner. Only forward movements and jumps are allowed, never backwards or sideways. The only exception to this rule is when your ball is in either your starting or finishing area, then you may move sideways. 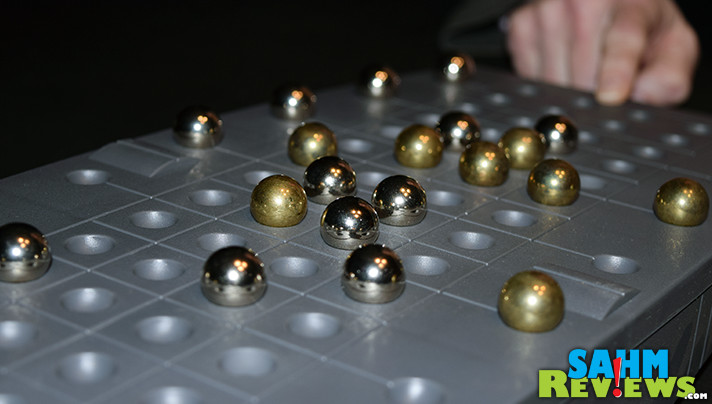 When either player gets one of their balls into the finish area at the other end of the playing surface, they then are allowed to move one of the balls on the edge of the field. This will alter the balance of the board in your favor and movement is taken in the same manner as the other pieces – either move one space closer towards you or jump a ball into an open spot. 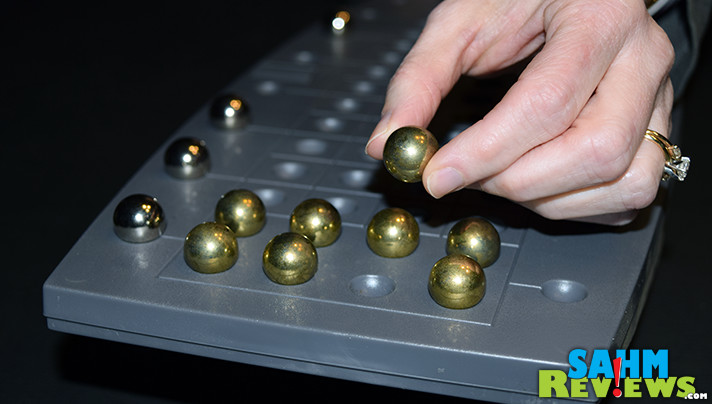 Yali includes more advanced rules for when a master strategy is determined for the base game. Only three side pieces are used (instead of four), and they are moved every time you successfully jump an opponent’s piece. This makes Yali much more strategic since leaving your ball in a position to be jumped will not only further your opponent’s progress, it will tip the weight of the board in their favor.

You’ll find copies of Yali on eBay for varying prices, from under $10 to some asking much more. The balancing board makes Yali much more strategic than a plain game of Chinese Checkers and worth picking up if you happen across one at thrift. Make sure all of the balls are present (twelve of each color), as accurate replacements would be very difficult to procure.

Have you ever played/seen Yali before?