If you ask most people whether they prefer Star Wars or Star Trek, you’ll get some very opinionated answers. Rare are the few that are true fans of both. The rest believe theirs is the best and the other is just fiction. And I have to admit, even with the popularity of the Star Wars world right now, I am a Trekkie at heart.

Actually both of us are. Nicole and I watched every episode of ST:TNG well before the invention of DVRs. We never missed an episode of DS9 either.  I mean, who could not love to hate Quark?! Voyager is where things started falling apart for us since DirecTV didn’t carry it. To date I don’t think we’ve seen every episode. And it was many years after the fact that we finally caught up on Enterprise. We hear rumors of a new series in the works, and are anxiously awaiting its release!

To top it off, we even attended the very first “Meeting of the Four Captains” event in Pasadena, CA. It was a typical Star Trek convention, but the first time the first four captains (Kirk, Picard, Sisko and Janeway) would appear on the same stage together. It was standing room only and the applause must have lasted at least 10 minutes. We’re so glad to not have missed that opportunity. 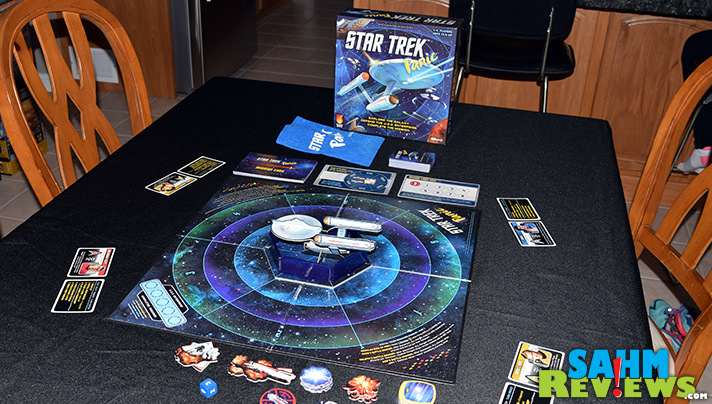 So when I spotted a copy of Star Trek Panic at Gen Con this past summer, I knew it was a game we had to have in our collection. It certainly was a bonus that it was re-theme of one of our favorite cooperative games, Castle Panic. We’ve featured a number of great games from both USAopoly and Fireside Games in the past, so the marriage of these two powerhouses could only mean one thing – a great game. 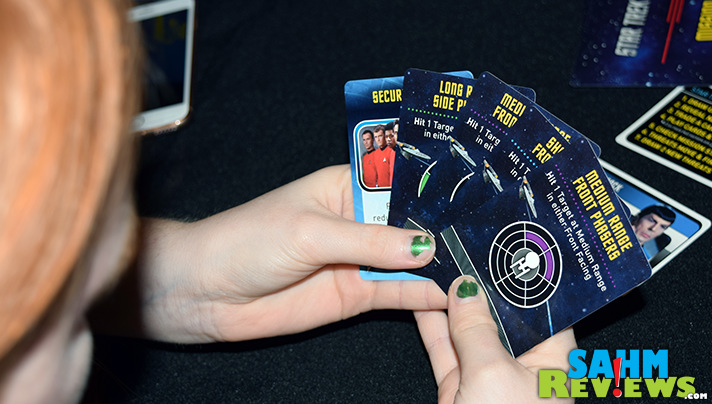 If you’ve played Castle Panic in the past, then you have the basic idea of how Star Trek Panic operates. Instead of non-stop monsters trying to invade your castle, you are fending off Klingon, Romulan and Tholian attack ships. Centered around the original series (ST:TOS for us Trekkies), each team member gets to take on the role of one of the original casts members. These can be selected or assigned randomly and each character has a unique special ability that may be used during that person’s turn. 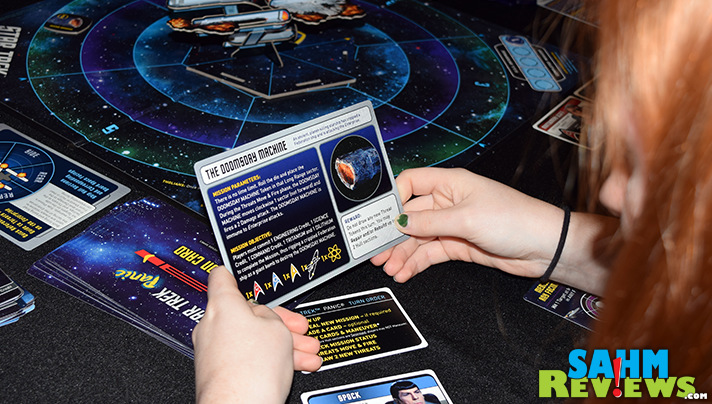 In Castle Panic you goal was to simply survive the onslaught of monsters and an occasional boulder. Star Trek Panic requires the same, but adds in missions to complete. The base game includes 18 mission cards, each with its own set of objectives (and of course, rewards). Also in the original you sat safely inside of your castle, firing at any region denoted by the cards you play. Not so in Star Trek Panic – the orientation of the Enterprise is critical. Some cards allow you to fire to the front only, or to the rear or maybe even the sides. Once per turn the current player will have the opportunity to maneuver the Enterprise to make best use of their cards. 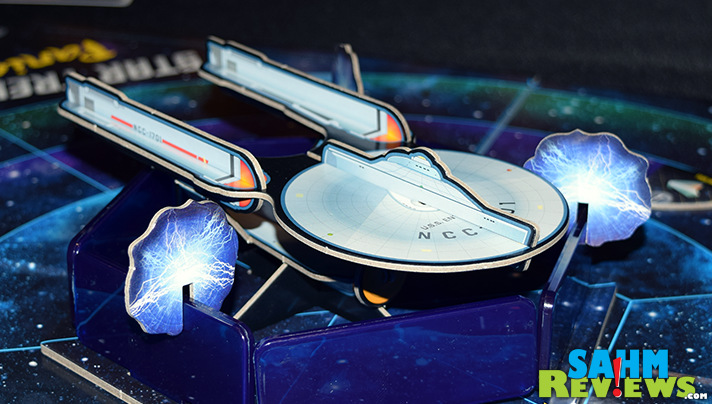 The Enterprise is protected by shields and the hull, both of which are fired upon by the encroaching enemies. Shield or hull damage indicators are placed upon the 3D ship to signify their destruction. Certain cards will allow for repair, but if you do not do so quickly enough, you stand the chance of being boarded. 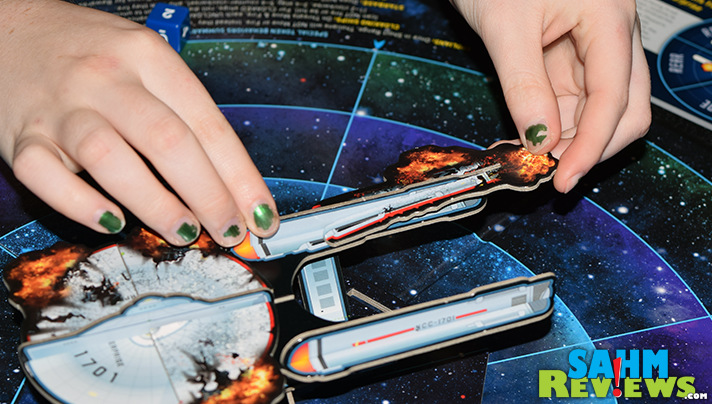 Once the enemy is on board, they begin doing damage to your ship by removing cards permanently from your deck. This can be mitigated by using your Security Team, but the real warning is…don’t let the aliens on board! 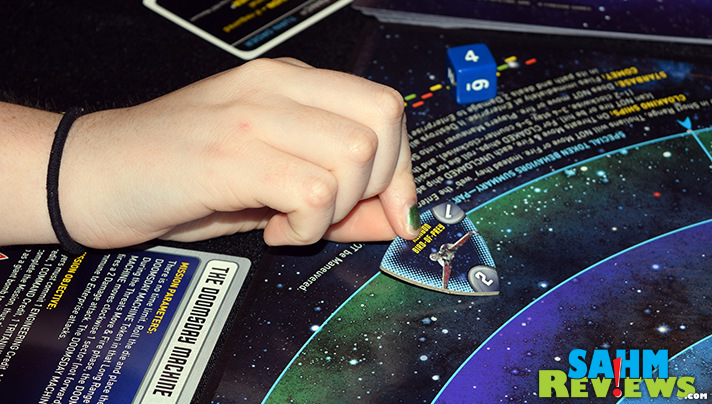 Star Trek Panic is such a ramp-up from the original Castle Panic that it is an excellent choice after you have mastered the original. The addition of the above, plus tractor beams, force fields, cloaking and starbases stick to the theme nicely and add a new level of difficulty needed for the seasoned gamer. 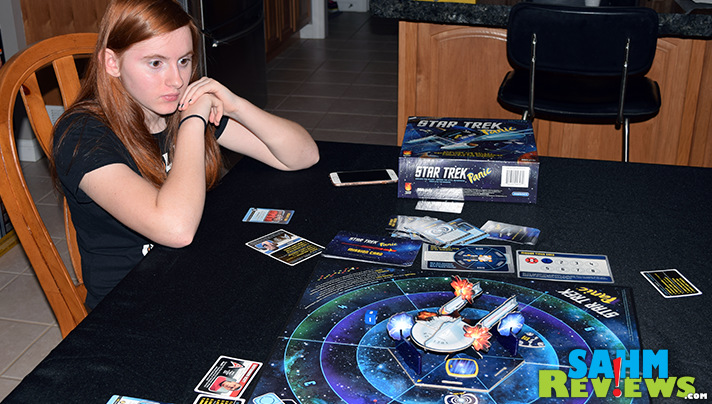 We’re amazed that you can find copies of Star Trek Panic for around $26 on Amazon. For those keeping track, that is a few dollars cheaper than the original Castle Panic, a surprise for a more complex title and one based upon such a popular intellectual property.

USAopoly is known for applying great licenses to popular games as seen by what they’ve done with Munchkin and Yahtzee. If they continue to expand on the Castle Panic license and introduce new mechanics and features, I’ll be first in line for a copy. Yes, even if it is Star Wars… So follow them on Facebook and Twitter to find if that will ever happen!