It’s true what they say about the habits and interests we develop when we are kids. I’m sure I’m not the only person with parents who insisted we brush our teeth, make our beds, try new foods, learn manners and establish good work habits. My parents were also proponents for having us involved in extra curricular activities such as baseball and 4-H. Academics came easy to me and by 3rd grade I was taking math with 5th graders. That qualified me for the district’s talented and gifted (TAG) program. 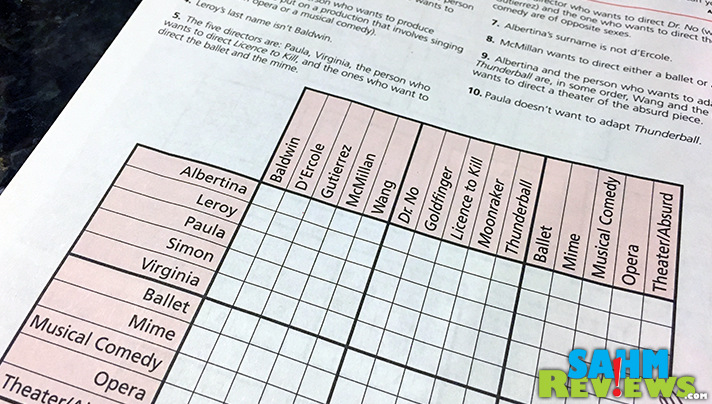 There’s one particular activity that was part of the TAG program that I’ve sought out ever since first being introduced to it. Logic puzzles. I still recall the L-shaped grids and the five cryptic clues that contained enough information to decipher who lived on what street, their favorite color and which pet they owned. As a jigsaw puzzle fanatic, putting power of deduction skills to the test in a paper-puzzle was fascinating to me. To this day, logic puzzles are the first ones I tackle when picking up Games Magazine.

But last year a board game provided me the same rush of excitement and logic evaluation I first felt when I was in 3rd grade. Alchemists game by game publisher Czech Games Edition (CGE) is a logic-based game where players are racing to figure out what makes up the various potions. By mixing ingredients then testing on willing (and unwilling) participants, clues are derived that allow the alchemist the figure out which ingredients belong and which do not. It’s a beaker-filled logic puzzle well beyond those of my childhood with a dash of social interaction, a pinch of calculation and a sprinkle of strategic game play. 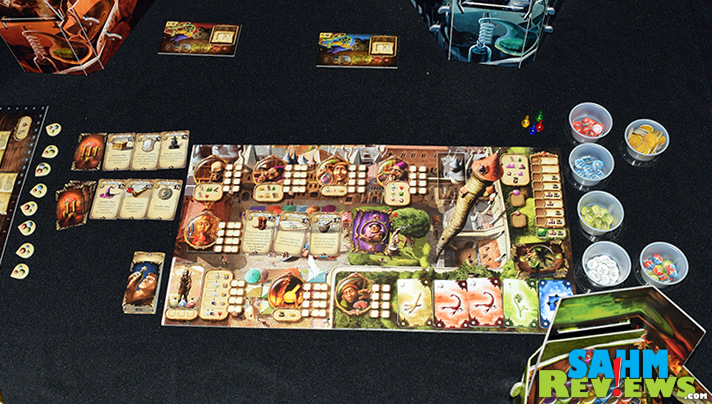 The game supports up to four players with each vying to be the first to discover the combination of potions. The main layout of the board is where alchemists forage for ingredients, perform tests, collect artifacts to aid in their studies, sell to merchants to fund their experiments and publish (or debunk) theories. Each player is provided with a secrecy screen where they track their experiments and the results and ultimately discover what makes up the various components. Yeah, that was a bit cryptic too, wasn’t it? Maybe I should explain it a little better.

Alchemists have access to eight ingredients and when combined, they make up different kinds of potions. Each ingredient has one signature (referred to as an alchemical) and it consists of a red, green and blue aspect. Each of those is either positive or negative but when matching aspects are combined, they create a potion. Red potions are healing (+) or poison (-), green potions are speed (+) or paralysis (-) and blue potions are wisdom (+) or insanity (-). So it’s pretty obvious that you don’t want to be creating potions that have negative results, but it’s necessary so you can identify them. Ultimately, you want to figure out what the signatures of each ingredients are. Therein lies the basis of the game – mixing components then using deduction and logic to figure out which have positive and negative red, green and blue results.

One of the coolest features of Alchemists is that the game can be moderated manually by a Gamemaster or the evaluation system can be automated by using the specially designed app and a smartphone with a camera. When you are testing ingredients – either on a student, yourself or to sell to a merchant, you utilize the phone’s camera to identify the ingredients and deliver a result. Players can share a phone or can sync the game code to work from the same ingredient database. This option not only allows all players to actively play, but it also makes the process fool-proof. 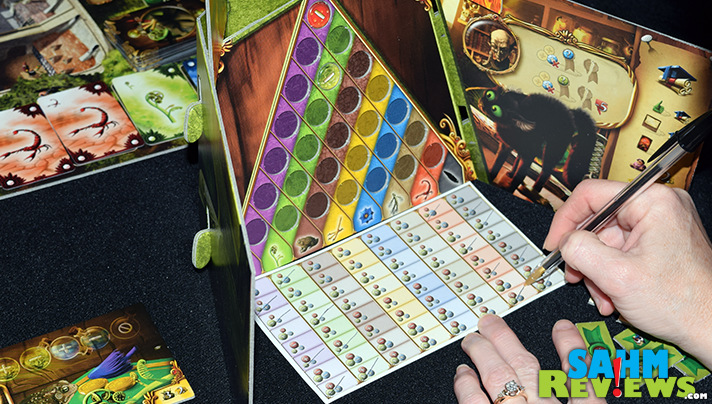 When you get your results, log it onto your results triangle and deduction grid to be utilized further as more data is compiled. I need to be honest and say that I’ve yet to master this. I’ve played Alchemists multiple times and have yet to properly calculate the equations or at least not quick enough to score the big points. Part of the reason is because I didn’t have a good grasp of how the ingredients (and results) corresponded to each other. So I’m going to tell you the trick.

When you get a result that is red positive (healing potion), logic might tell you that both the ingredients have a large red circle. (Insert loud buzzer noise here.) You’re incorrect. A red positive means that one of the ingredients has a large circle with a positive while the other that was scanned has a small positive circle. Same holds true for the others. And if you end up with a neutral result then everything about those ingredients is opposite. Getting a neutral potion is one of the most valuable results you can receive. 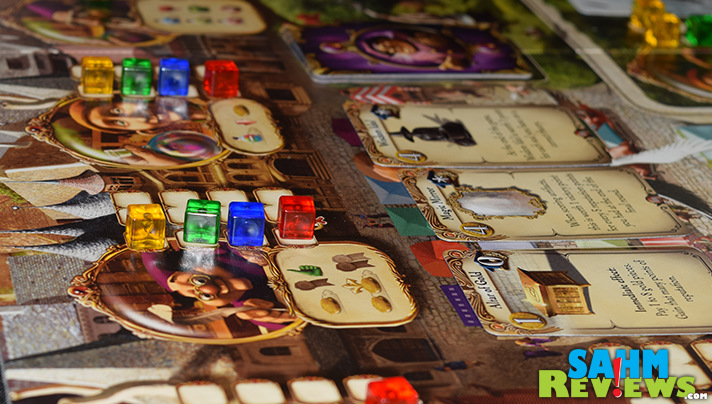 But even if you’ve figured all of that out, the rest of the board still comes into play. You can’t test ingredients if you haven’t forested for them. You can’t pay for testing if you haven’t sold or transmuted anything to earn money. You can’t earn points for publishing or endorsing a theory unless you take the time to take that action. Alchemists game is not just built on a logic puzzle but it’s also a worker placement and resource management game. Your alchemist can only do so much in one day and sometimes the things you need to get done get stiffled by other players needing to do the same.

And sometimes other players won’t need to do something but they will take that action just to get in your way. Some of my favorite gamers (who shall remain nameless) play like that. Okay, in the interest of honesty, sometimes that’s me. 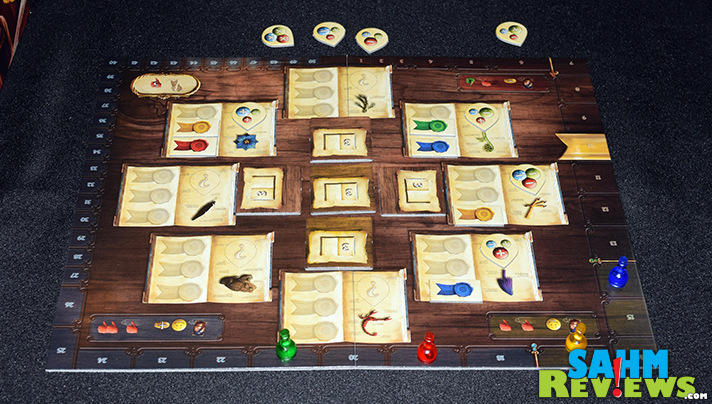 There are also opportunities to back another player’s theory, utilize artifacts and gain special favors. All the while, the actions you take impact your reputation and as with the real world, your reputation makes a difference in whether people want to trust you, want to purchase from you and how much they’ll pay you for your services. Alchemists has a lot of character brewing in between the experiments, but ultimately, the winner is determined by who has the most victory points at the end of the game. And that’s generally determined by who is able to publish the most theories and who is able to gauge which other theories are most likely correct. 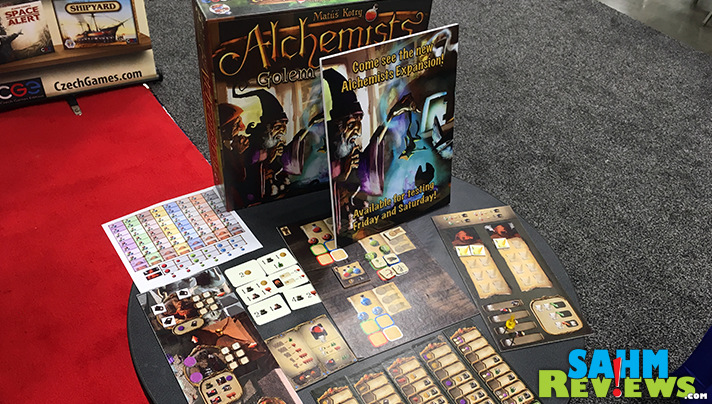 Alchemists game is that youthful logic puzzle from way back in 3rd grade that grew up to adulthood and matured. If you enjoy deciphering clues, you’ll want to add Alchemists to your collection. Your local game shop should have copies, as should Barnes and Noble. Of course, you can pick up a copy of CGE’s Alchemists game on Amazon for around $44. Stay tuned to Czech Games Edition’s Twitter and Facebook channels to watch for news regarding the Alchemists expansion being released late fall.

Are logic puzzles an ingredient in your ideal game?