I had just finished my sophomore year of high school when the original Ghostbusters movie came out. If you were alive at that time, you certainly recall how it became an instant hit. That Halloween the most popular costumes were those of Venkman and Stantz, and my Junior year homecoming had us dancing to the movie’s theme song (yes, it was as awkward as you can imagine).

Last week the sequel to this classic hit the theaters. I remember hearing harsh reviews months ago, but as of late it seems to have garnered more favor with a current rating of 73% on Rotten Tomatoes. Our family hasn’t checked it out yet – instead I have chosen to relive the original with a game from Cryptozoic Entertainment that is the result of a very successful Kickstarter campaign last year – Ghostbusters: The Board Game. 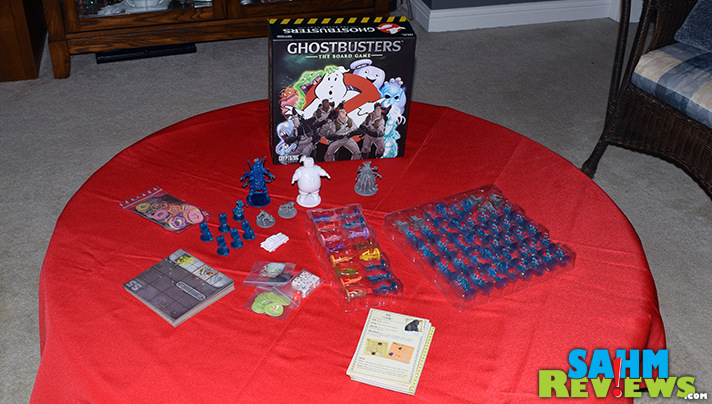 While abstract games are my favorite, our family as a whole loves a game type referred to as “cooperative“. These types of games require everyone to work together to fulfill a common goal, with everyone either winning as a team or sinking with the ship together. Even better when a game has multiple scenarios to complete, assuring it won’t collect dust once a level is mastered. 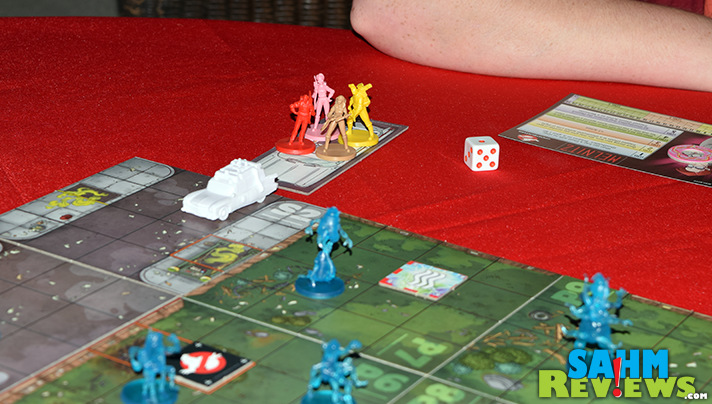 Ghostbusters: The Board Game has you and up to three people taking on the challenge of ridding the city of ghosts and ghouls which have appeared from the spirit world. Choose four of the included nine different possible characters and pile them into the Ecto-1 (check out the awesome miniature of this iconic vehicle!). 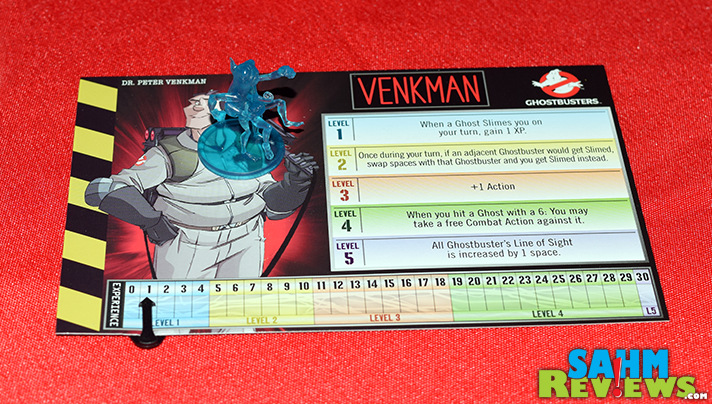 As previously mentioned, Ghostbusters is a scenario-based game. This means there are multiple board configurations and setups you are challenged with – or you can create your own. The basic rules apply to all instances: Take up to two actions per turn and once per round roll a custom die to choose a custom event. 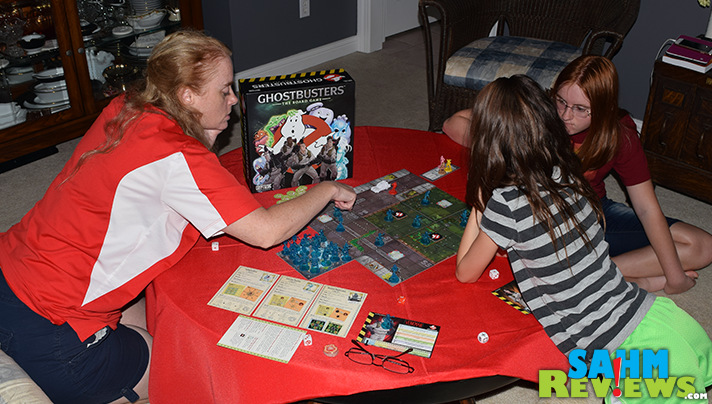 Each scenario has it’s own special rules put into play, also varying the game. And you’re not just fighting any old ghost. You might start by capturing phase 1 spirits, but the game includes a variety of ghouls up through level 7, each with their own abilities, strengths and events. 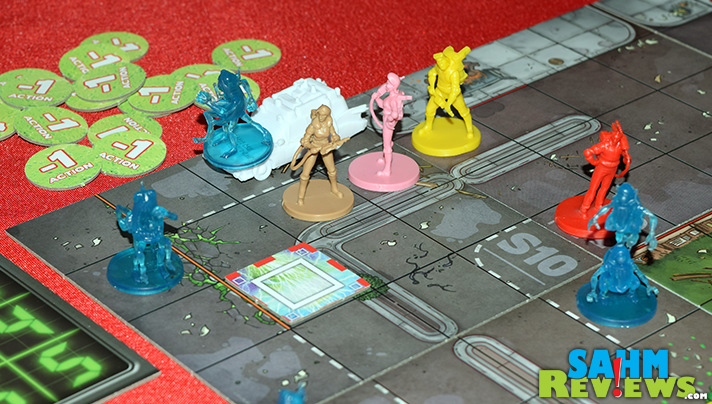 Your goal is straightforward – close all gates before the spirit world is emptied. Your team loses if there are no additional apparitions available to enter the city when triggered. Close all of the gates while some remain trapped in the spirit world and you have saved the city! 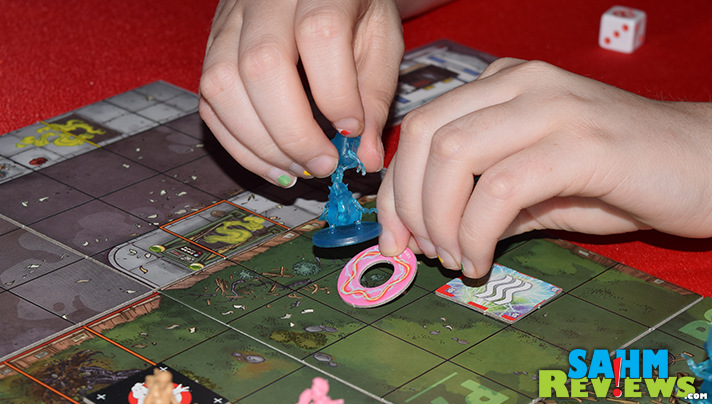 The best part about Ghostbusters was the amazing Ghost Gun invented by Stantz. These ‘sucked’ in the spirit and sealed them into a canister for eventual transfer back to the spirit world. In Ghostbusters: The Board Game each of you can cast these ‘streams’ towards the ghosts or gates, with each one having a different number of simultaneous streams required in order to vanquish them. 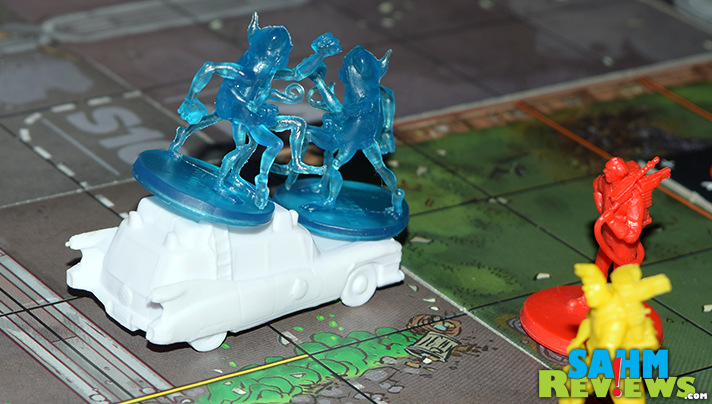 We had so much fun playing the first two scenarios of the first 4-part campaign that the girls requested to leave the game set up so we can continue further over the course of the summer. Our characters receive experience points for various actions during the game, garnering them new abilities. These carryover from game to game, so they are anxious to seek out more difficult spirits – all the way up to the Stay-Puft Marshmallow Man!

The retail version of Ghostbusters: The Board Game can be found at retail locations such as Barnes & Noble and Books-a-Million. When you decide to purchase your copy, be sure to inspect the components closely for defects and miscuts. Ours had at least one misshapen ghost that might be repairable by glue, but more troubling was the mis-cut floor tiles. Many tiles are supposed to have red edges denoting obstacles that cannot be transversed or shot across, but because they weren’t die-cut correctly, the red areas were missing completely. We were still able to play the game correctly by referring to the instructions, but will end up using some red paint or a marker to make it more obvious. Being from the print industry in a former life, it is completely a design issue and one I hope they overcome in subsequent prints. But, do NOT let this deter you from trying it out!

If you don’t find it at your local retailer, Amazon has copies for nearly 50% off! The success of this first edition has spawned a second which recently closed on Kickstarter. These are expected to begin shipping late next Spring – hopefully we will be able to bring you a preview right away!

Find out more about Cryptozoic Entertainment by checking out their website and taking a look at the last game we featured from them, Mod-X. I would also recommend keeping an eye on their Facebook and Twitter feeds as they are constantly working on new games and you certainly don’t want to miss their next one! We have friends that played Internal Affairs at the Origins Game Fair and won’t stop raving about it!

Were you around for the original Ghostbusters? Will you be checking out the new one?

17 thoughts on “Ghostbusters Board Game Overview”