There’s no denying that at some point we all want a little more. I’m not talking about money (although that sure would be nice). I’m referring to a bit more challenge in our games. We graduate beyond Monopoly and Aggravation and want a deeper, more thematic experience. That’s where the world of hobby games steps in.

You won’t find these at your local Walmart, but the extra day or two it’ll take for your friendly UPS driver to deliver them is more than worth the inconvenience. We’ve played every single one of these games, and have told you about some here on SahmReviews. Now it is time for you to experience them for yourself!

In our annual Hobby Game Gift Guide you’ll find 2-player and multi-player games, fantasy and nautical themes, historical and classic titles – something for absolutely everyone. We’ve rounded it off to a dozen, so let go shopping! 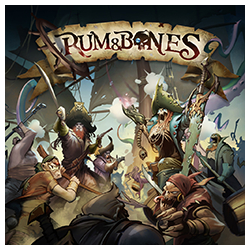 Rum and Bones is a miniatures board game where 2 to 6 players control pirate crews engaged in fierce combat. Inspired by MOBA style video games, Rum and Bones’ gameplay is deep, fast-paced, and highly strategic. The game pits two pirate factions against each other. With their ships locked in combat, the crew and heroes attempt to board the enemy ship to disable it, completing objectives and gaining victory points to win the game. This is a great board game for anyone who loves lots of detailed minis, fantastic design, and competitive gameplay. 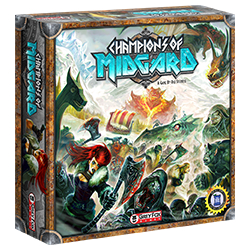 Champions of Midgard is a Viking era worker placement game with dice-driven combat. Taking on the roles of competing Viking leaders, players hunt trolls, battle draugr, and slay mythical Norse beasts in a quest for glory! Playing in just 60-90 minutes, Champions of Midgard is receiving rave reviews and is quickly becoming recognized as exciting and approachable game in the hobby. 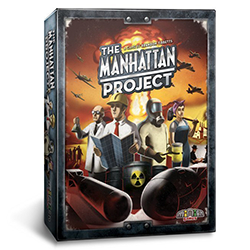 The Manhattan Project makes you the leader of a great nation’s atomic weapons program in a deadly race to build bigger and better bombs. You must assign your workers to multiple projects: building your bomb-making infrastructure, expending your military to protect it, or sending your spies to steal your rival’s hard work! You alone control your nation’s destiny. You choose when to send out your workers-and when to call them back. Careful management and superior strategy will determine the winner of this struggle. So take charge and secure your nation’s future! 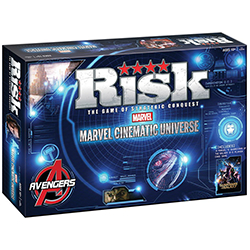 Play as one of five factions (Iron Man, Capt. America, Thor, Ultron and Hydra), each with its own victory condition, representing heroes and villains in the Marvel Cinematic Universe. 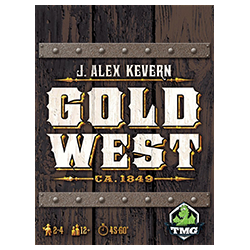 Gold West is a delicate balance of resource management and area control. Build your mining empire while vying over the precious metals of the frontier! Carefully manage your supply tracks and refine the right resources at the right times to keep a step ahead of the competition. Can you lead the West into the Golden Age?. 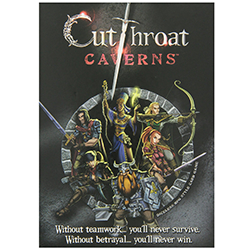 A devilishly-fun fantasy adventure card game of dungeon delving, where players compete to slay the most prestigious monsters. Walk the fine line between cooperative play and backstabbing amid creatures designed to punish the party for not working together – while enticing them with rewards for furthering their own selfish agendas.

Tsuro of the Seas 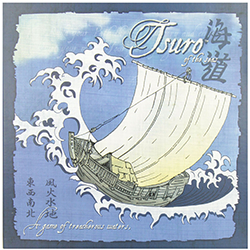 In Tsuro of the Seas, you will sail the treacherous waters of the Mystic Seas in an engaging game of adventure and suspense! As the captain of a mighty ship, you will navigate the seas by placing wake tiles to direct your vessel. Take great caution to avoid your opponents’ ships… and the dangerous daikaiju (monsters) lurking under the surface. Guide your ship with a steady hand and be the last captain sailing to survive the Mystic Seas and win! 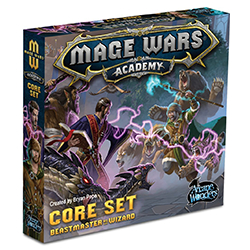 What would it be like be a powerful Mages, studying your art, and honing your craft, at the Academy in the world of Mage Wars? How would you spells work against each other? Mage Wars Academy is the completely new game that is fast paced and exciting, set in the Mage Wars universe. Driven by the unique spellbook mechanic, players can customize their strategies AND have full access to them throughout the game! With play times averaging 20-30 minutes, Mage Wars Academy offers strategic choices, tactical gameplay and excitement for everyone! 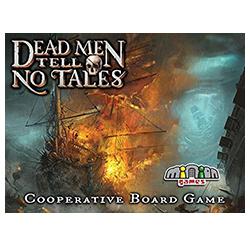 Dead Men Tell No Tales is a co-operative game for 2-5 players. As players work together, they can pass their Actions on to their teammates in order to best utilize the assets that they have. Players will build the board as they play, ensuring that no two games will ever be alike. As they search the ship for the Treasure, they will encounter Enemies and Guards that they must battle, along with various items that will help them in their quest. all the while, battling the inferno that resulted when they took over the ship. Unique systems for tracking fire, enemy movement and a player’s fatigue all combine into an interesting and unique cooperative gaming experience. 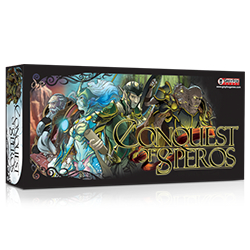 Speros. A rich and beautiful land, embroiled in a 20 year war: a dispute for territory and control of its valuable resources.

You lead a general and his minions. Your mission: secure the land and destroy anything that gets in your way. Conquest of Speros is an easy to learn, quick to play game featuring rich player interactions. The game features hand management, unit placement and area control aspects with just a bit of “take that”. 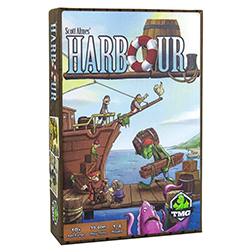 Harbour is a worker placement game where players move their worker from building to building, collecting and trading Fish, Livestock, Wood, and Stone; and cashing those resources in to purchase buildings. The game ends when a player has purchased his fourth building. At the heart of Harbour is a dynamic market mechanism. Each time a player purchases a building, the value of the resources they used drops, while the value of the other resources rise. You’ll have to carefully time your purchases to take advantage of the ebb and flow of market prices, or be prepared to waste some resources! 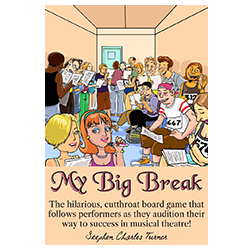 Ever wonder where Broadway stars come from? Everyone who ever landed a big break had a story leading up to it. This is a game about those stories. You must possess all three specialty credits (acting, vocal, and dance) and must have 15 total credits or more to audition for your ‘Big Break’. If you fail this audition, you lose an advanced credit, a generic credit, and gain two bitter cards. You will take turns clockwise with your ‘friends’ (who you are sure are less talented and deserving than you are) until somebody books their ‘Big Break’.

You should have no trouble finding a hobby game gift in our comprehensive list! Look for the tiny

logo on titles that we’ve previously given a full preview, and don’t forget to enter our 44 Days of Giveaways – there’s a new one every night! 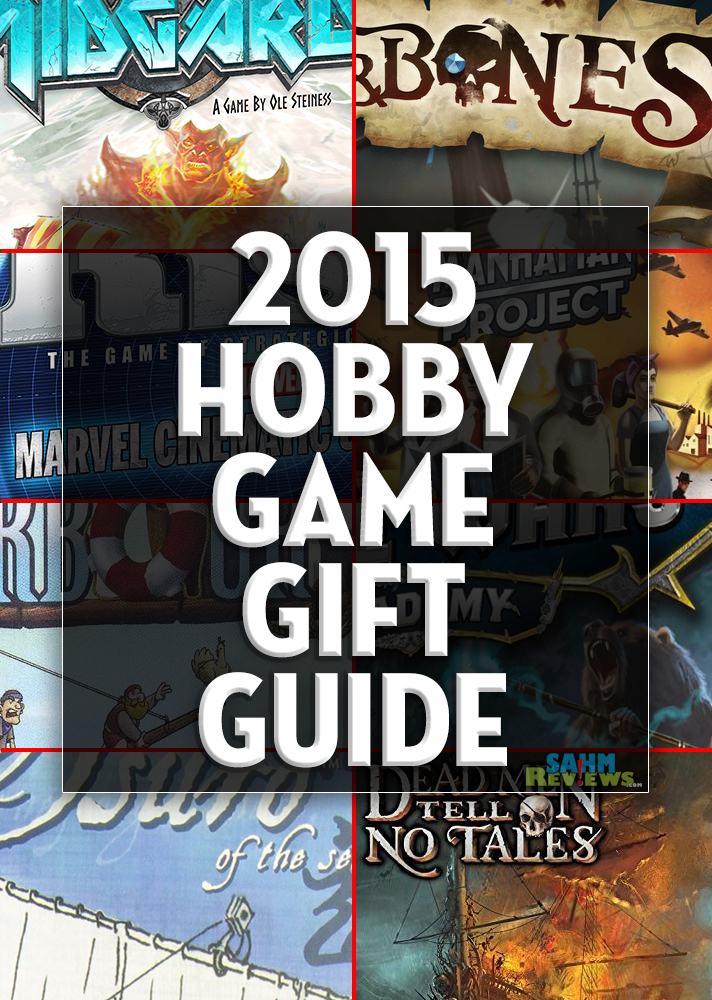