I’ve mentioned time and time again that among all game types, my most favorite are abstracts. Usually a head-to-head battle against a foe, no luck involved and each having an equal chance of winning. One example we featured in March from FoxMind was Octi – a very unique take on Checkers with a Capture-the-Flag element added.

I also have professed my preference for games made from quality components, and gushed over one of our first Thrift Treasure finds – Quits. It was made of all wood and had stood the test of time by looking as good as new even though it was decades old (don’t we all wish WE did?!). We recently added a couple more titles from FoxMind to our collection that also fulfills all these criteria of being made from wood and having great abstract play. 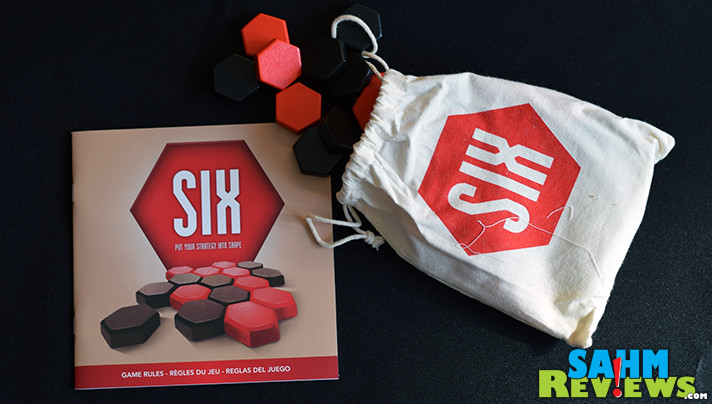 First up is Six, a beehive-in-a-bag. Kidding aside, each player controls one color of hexagrams attempting to line their tiles up in one of three winning combinations (triangle, line or circle).

Each player takes turns placing one piece next to any previously played hex. Think of it like a very large game of tic-tac-toe or Connect 4, but without any formal game board (perfect for travel!). If you run through all the tiles without a winner, the real fun starts. You can start removing tiles of your color from anywhere on the board to place it in a new area. This can lead to some very strategic (and sneaky) turns that trick your opponent into thinking you’re working on something else, only to circle back and complete your goal elsewhere!

Once you think you have mastered the basic rules, you can then add advanced rules. After playing all tiles and beginning the second phase of moving tiles, if you move one that creates a disconnect in the tiles, the smaller of the groups are removed from play completely! Get your opponent to under six hexagons and you can win in this manner also. There are even included rules for a 4-player team game!

Rated for ages 7 and up, each game will take only 10 minutes or so. You’ll find Six on Amazon for under $25 as well as your local Barnes & Noble and other retailers. 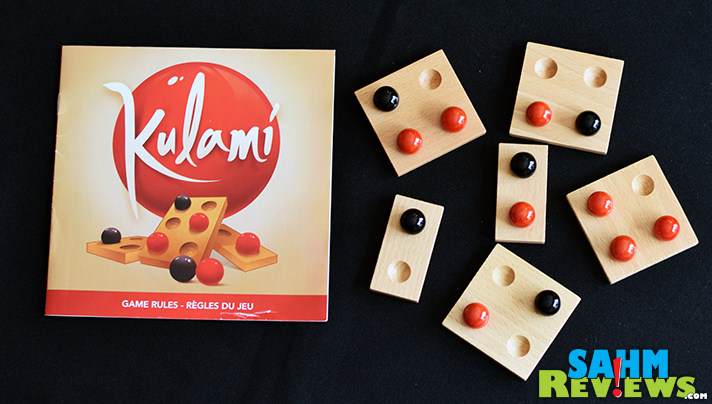 Where Six shined in its simplicity and quick play, Kulami is definitely something deeper, but still plays in around 20 minutes. This time you aren’t trying to line things up or capture an opponent, but attempting to simply put more of your marbles on a piece and then scoring points for the size of the pieces controlled.

In the basic game you arrange the wooden tiles into an 8×8 grid as shown using the rule book as a guide. In subsequent matches you can arrange the tiles in any manner you like as long as they are all connected. The first player puts his marble anywhere on the board.

The other player (and every subsequent turn) is subject to a strict set of placement rules. You must put your marble in the horizontal or vertical row extending from your opponent’s last-placed piece. BUT, you also cannot place it on the same tile as they did, nor on the same tile you put YOUR last marble on. The photo above shows the legal places that black can put their next piece. 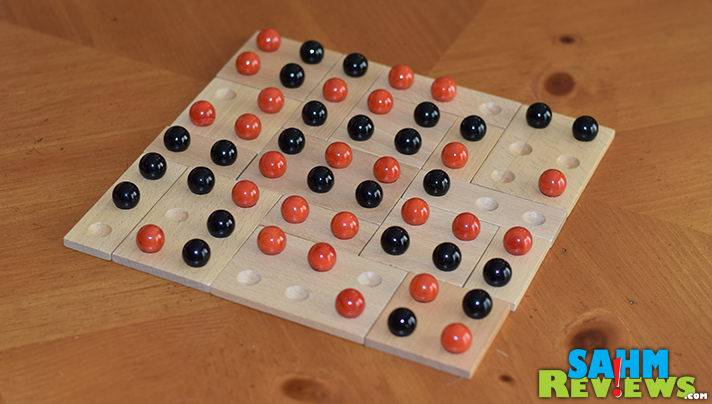 The object is to have a greater number of marbles of your color on each tile at the end of the game. Tiles are scored according to their size (a 2×3 is six points, a 2×2 is four, etc.). Each player takes turns placing until all are on the board or no valid moves can be made (no place to play your marble). 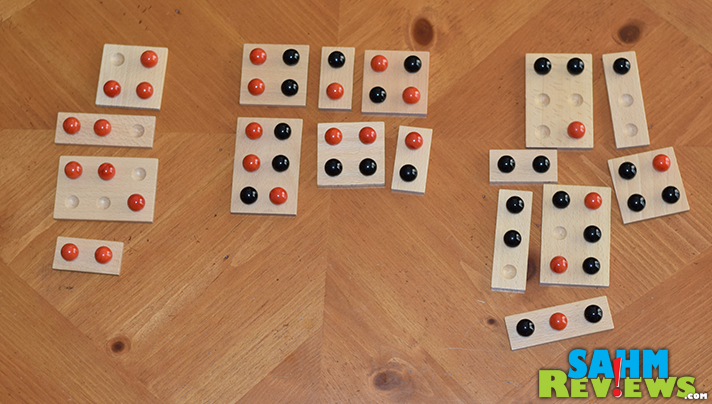 For ease of scoring, separate the tiles according to who won each one, again with tiles that are tied being worth nothing. In our case, red scored 15, while black won with a total of 27!

Thanks to the flexibility of changing the board setup, Kulami has a lot of replay value and no two games will ever be the same. You can also find it at your local bookstores or on Amazon for under the MSRP of $29.99.

Regardless of which title you choose, you will get more than your money’s worth with either. FoxMind currently has 90 game titles in their library, so if these two don’t do it for you, I’m positive you’ll be able to find at least one that does. Be sure to follow them on Facebook and Twitter to stay on top of new game releases!