We’re no strangers to water-themed games. Among some that we’ve featured are waterproof games, avoiding becoming shark bait, battling pirates, catching fish, jumping between lily pads and even underwater robots. Each and every one has been a different style of game from the others using different mechanics. Well we’ve found another one. This one involves pirates. Again. What is it about pirates that we like so much?

Maybe it’s because we can make people walk the plank. That’s exactly the premise of our newest game, Walk the Plank from Mayday Games. The goal is to get everyone else to walk the plank and fall into the water before they turn the tables and do it to you. To win, simply be among the last two pirates standing.

The game includes three pirate pawns and a deck of 10 cards for each participant. Players take turns playing their cards in order to navigate their opponents onto the plank and ultimately off the end of it. Sounds easy, right? It is except the other pirates on the ship are all doing the same thing as you. 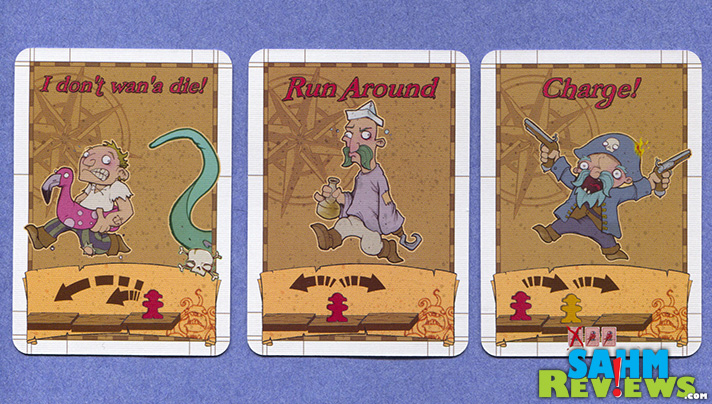 Each player has the same 10 cards to choose each with a different action type. Some are offensive (Charge, Shove Right, Shove Left, Shove Anyone, Extend the Plank), some are defensive (Pull to Ship, Drag to Sea, I Don’t Wan’a Die). Of course, there are a few (Retract the Plank, Run Around) that you may think will help you advance in the game but may end up hurting you based on what other actions others have taken. Some cards can be played every round while more powerful cards can only be played every other round.

At the beginning of each round, players secretly select three cards from their deck to play during that round. Play rotates clockwise with each player revealing the first of their three cards and following the actions on the card. Once all three cards have been played by each pirate, the round is over and selection of new cards begins.

When someone plays the “Retract the Plank” card, that tile is removed from the board until someone plays a card to extend the plank again. Depending on how daring the other pirates are, you may find that the plank gets retracted allowing for a REALLY quick game. If everyone is playing conservatively and continually adding a plank back, the game will last a little longer. However it only take a few times of people retracting the plank and pirates will quickly start plummeting into the water. On a side note, we liked feeling like there was actual water under our boat so we used a piece of scrapbook paper with water to create the effect.

Walk the Plank is a quick game for 3-5 players ages 8 and up. While it doesn’t involve deep strategic thinking, it does require the ability to thinking a round or two ahead since some cards cannot be played every round. It’s a great game when you’re looking for something light or don’t have a lot of time.

You can keep up with the latest Mayday Games by following them on Facebook and Twitter. Walk the Plank is available on Amazon for under $17 or direct from Mayday Games on their website.

Who will you want to make walk the plank?

18 thoughts on “Time to Walk the Plank, Matey.”