One of the great things about attending the annual Chicago Toy & Game Fair is we get to see a huge amount of games that are newly released, haven’t been made yet or the inventor is there looking to strike a deal with a publisher. This year the timing was perfect for a holiday-themed release from Griggling Games, a new but up-and-coming game company based out of New York. Their new game, Santa’s Bag, falls squarely into a category we love and hope to see become more mainstream – we call the category “Beginner’s Strategy”.

It is rare to find a game that will challenge our girls to think ahead without overwhelming them with too many options. We firmly believe there’s a place for strategy games in every household and that they will help develop critical thinking and planning, tools that will take your children very far in life. Most strategy games do a good job of appealing to the male portion of the market, but here we have one targeting a key age group (7+) and for obvious reasons is gender-neutral.

In Santa’s Bag you take on the role of an elf in Santa’s workshop. In fact, you’re all elves competing to make the most toys for the best children in the world. Of course, even the bad kids get a little something, so you will create things for them also, you’ll just receive fewer points for doing so. 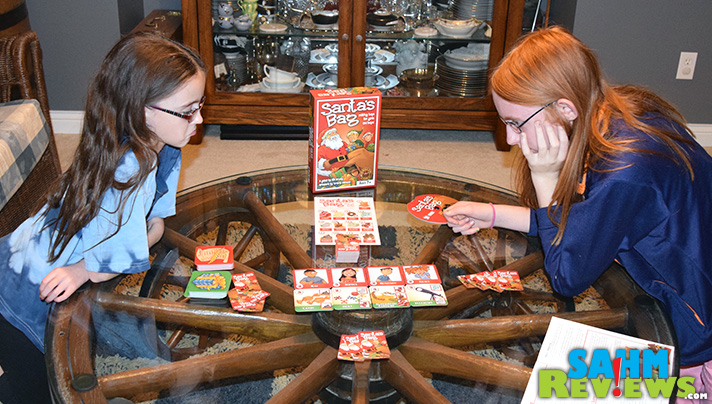 The mechanic of building toys is very similar to Igor, a game we told you about a month ago. Every toy has a recipe of raw materials that must be collected and turned in to complete the toy. Instead of dice, you use small cards that each have a picture of one of the raw materials on it. There is a handy cheat sheet to remind you of the probability of each card appearing, which becomes very important during the trading phase of each turn.

At the beginning of the game, the number of toys to be made is agreed upon and kept track of by using the included wheel. On each turn you have the familiar “see if you have the parts necessary” and “draw a card” to build your hand. But the twist, at the start of your turn you are allowed to trade with other players (or the deck), opening up some interesting bartering opportunities. Have a rare card but really need a common one to complete your toy? Maybe you can entice them with an uneven trade! Pairs of cards can be turned into a wild card, so you might be able to trick someone into giving you the all-to-common “wood” card, completing your pair and allowing you to exchange it for “glass” (much rarer). 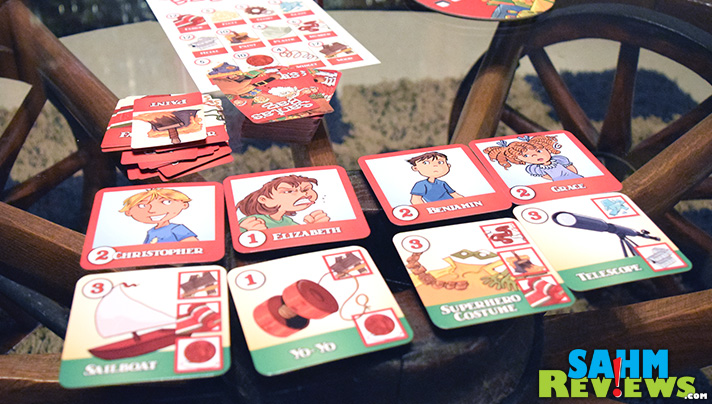 If no other player wants to trade with you, you are allowed to trade with the house. The rules state “Draw a part card, then discard a part card”. It did not specify whether you had to keep the drawn card or if that one could be discarded immediately, so after some discussion we decided to allow immediate discards, basically giving us a free draw each turn. If I hear back from Griggling Games that the intention is different, I’ll be sure to update this text. (EDIT – confirmed by the publisher – we are playing it correctly, you may discard the one you just drew.) 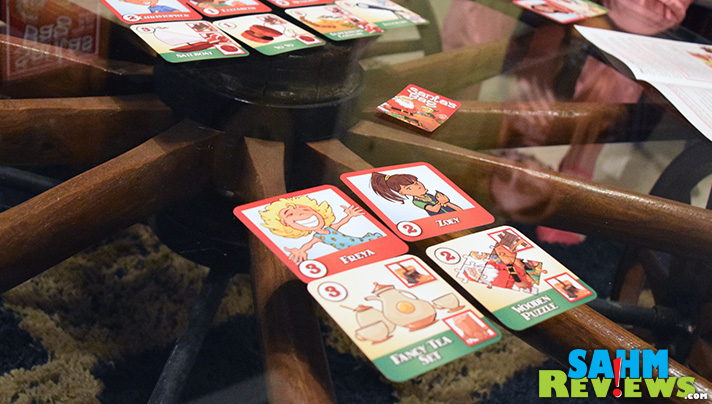 As I mentioned previously, there are good and bad kids, and they are represented by differing point values. Obviously you’d rather make toys for good little girls and boys, and for doing so you are highly rewarded. Toys also have different levels of difficulty to complete based upon the materials needed, so you also receive bonuses for completing the most difficult ones. This combination makes each toy completion range in value from 2-6 points (each kid and each toy range from 1-3, and they are completed in pairs). 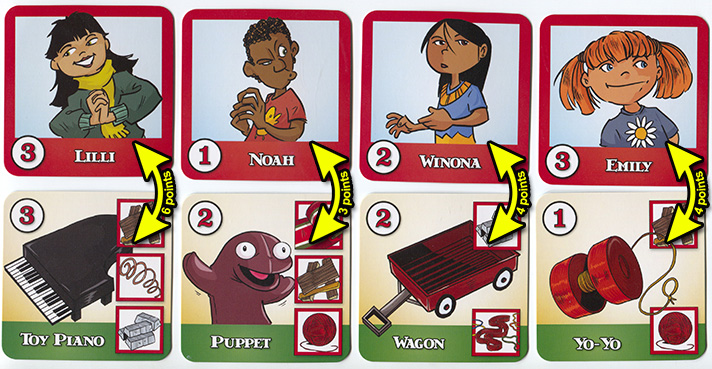 Once the quota of toys has been made, the game is over and points are tallied. On more than one occasion we found that the last two toys created played a very important role in the final outcome (waiting for a higher-value toy instead of knocking out a small one, for example). By this time whoever is in the lead will just want to finish the quota, while the other players will stall to maximize their point gain. Again, forward thinking is required. 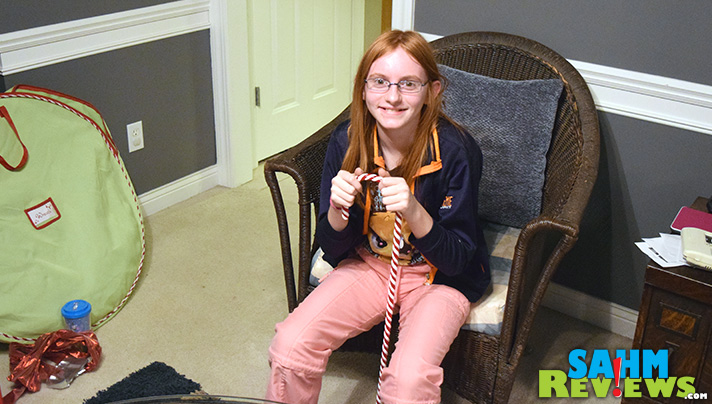 This isn’t a heavy-ruled multi-hour strategy campaign, but a fantastic introduction to something other than the trivia or word-creation game you’ll find at Walmart. With the holiday theme, it could become your 4th quarter go-to game for the entire family. Tomorrow we’ll be headed to Thanksgiving dinner with the extended family, with kids from 9-18. Since the game supports up to eight players, we’ll definitely be toting Santa’s Bag with us so they can help us make some toys!

How new is this game? It made its official debut at ChiTag and is currently only available direct from one of Griggling’s authorized retailers or directly from Griggling via Amazon. It also already garnered recognition from The National Parenting Center by receiving their coveted Seal of Approval for the holiday season 2014! If you like what you see here, check them out on Facebook and Twitter to learn more about the rest of their line. Griggling Games may be new, but they have definitely hit the ground running! 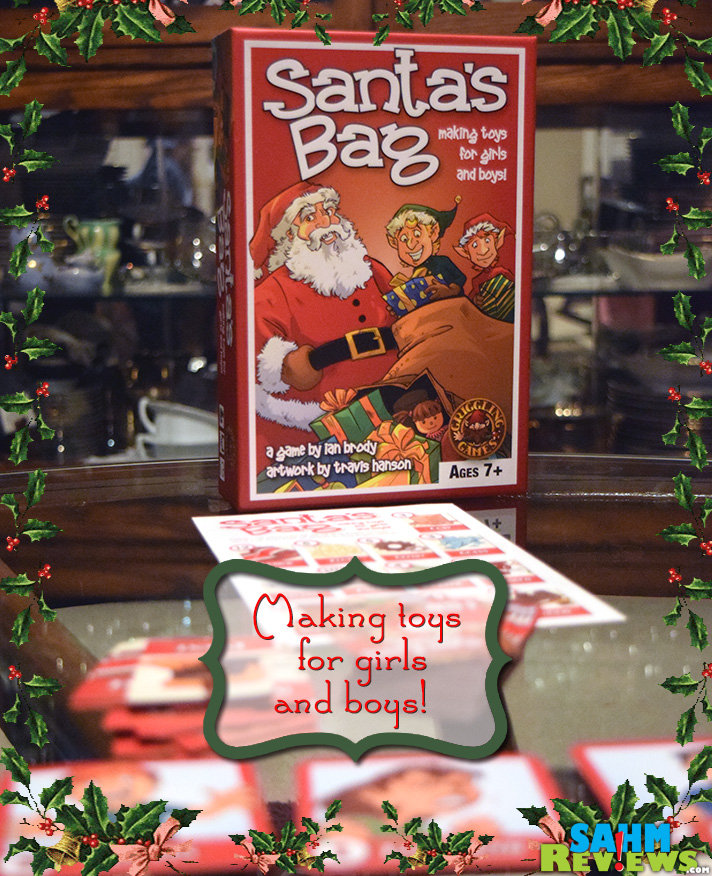 21 thoughts on “Santa’s Got a Brand New Bag”