Do you remember the Kickstarter campaign by Wiggity Bang Games mentioned here last month for Alpha Bandits? Great news! They succeeded in raising the funds needed to bring the game to market and even exceeded their goal by over 33%! But let’s not forget that Wiggity Bang has other great games already on the market. Case in point is today’s feature – Quao! (Pronounced “Cow”).

Now normally I’d take you through a game and show you a photo of the winner (or loser) as a closing item. This time I thought I’d start out with our last photo – everyone having huge smiles thanks to all the silly things we had to say and do! 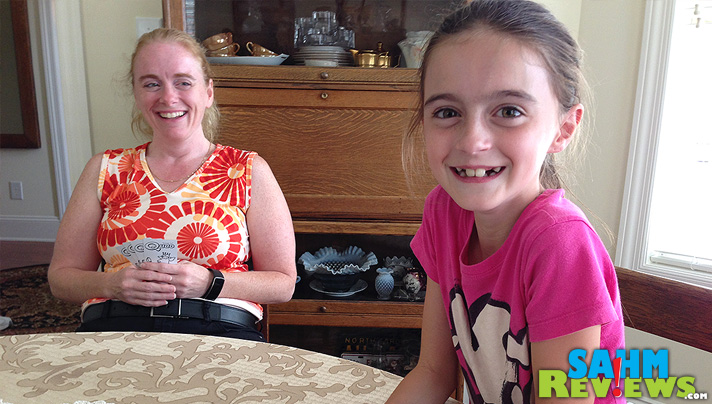 This card game should probably be classified as a party game, but it works just fine as a family game as well. We sat down with extended family to find out about this game that we’ve seen for sale a number of times while perusing the shelves at Barnes & Noble.

There aren’t any pieces to the game to show you, other than a deck of 100+ cards and a set of instructions. Much like Quelf, a Thrift Treasure we wrote about in February, Quao requires you to come out of your shell and act out or divulge things you normally wouldn’t. But even better, you can force those actions on other players instead of doing them yourself!

There are four rounds played, each time one person being designated the Quao (ie. supreme ruler). This person oversees the round, makes or breaks the rules of the game and hands out any penalties to other players for stepping out of line.

There are different categories of cards, but you only play one card per round with the person to be first to get rid of all of their cards declared the round winner and the next round’s Quao. In this example, I had a “Super Cheata'” card that once played, required me to laugh in another player’s face when they received a penalty from the Quao. If I didn’t do it, I too received a penalty (which consists of adding a card to your hand).

A twist, there is a second larger (in size) deck of cards that has special rules on them. Only the Quao knows the rules of the card, and when a player breaks the rule he/she is assessed a penalty. It will take a few times of people breaking that rule to finally figure out what the rule is to be able to avoid it again. 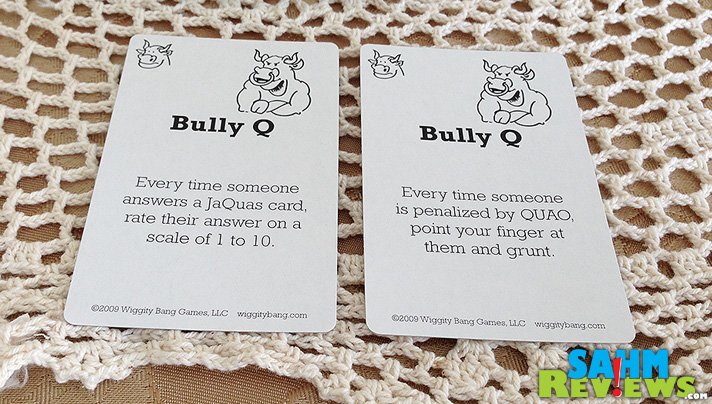 Everyone’s favorite category was the “Bully Q” cards, which are the ones you don’t play for yourself, but on your opponent. As usual, I was the immediate target and received two of them right at the beginning of the game. I got to comment on everyone’s answers to the JaQuas card (eg. “Name something that you hide from people”) and rate them from 1 to 10. If they didn’t answer correctly (to the Quao’s satisfaction), I then had to point and grunt at them…

Quao turns out to be quite a fun party game without the worry of adult material that tends to creep up in similar offerings. There is quite a variety of tasks to complete or things to say, giving the game a decent amount of replay value. Of course, when the kids aren’t around it is easy enough to take the game to a more mature level with cards that ask you to fill in the blanks like “I only _____ if _____.” and “Last night I _____.”

You just can’t beat a silly party game for under $10 that will thoroughly embarrass you and your friends. You might be the lucky one to draw “Tell us about an embarrassing moment you’ve had”! See what else Wiggity Bang Games is up to by following them on Facebook and Twitter, or by checking out their website. If you see a game from them you’d like to see on SahmReviews before you decide to buy it, tell them!