When I was growing up, my paternal grandparents, aunts, uncles and cousins all converged on one house at Christmas to exchange gifts and eat. My dad was the oldest of eight children (no, they weren’t Catholic) and despite living in a few different areas of the state, most managed to get together as a huge group at least a few times a year.With so many people, making a ham or turkey wasn’t going to be enough.  Instead, dinner was comprised of all appetizers.  The women would get together ahead of time and prepare several dishes then individually bring some of their family’s favorites.  Miniature pizzas, miniature tostadas, vegetable trays and dip, crackers with summer sausage, meat and cheese trays, chips and salsa and the list goes on.  (Are you hungry yet?)  Among the tried and true recipes was a heated recipe for cocktail meatballs and lil’ smokies.  It was served in a sauce and kept warm on the buffet.

As an adult, this party still takes place annually with only a few minor changes.  One thing hasn’t changed, the menu of appetizers… including the miniature meatballs.  I never bothered to ask for the recipe figuring it was just meatballs and a jar of BBQ sauce. 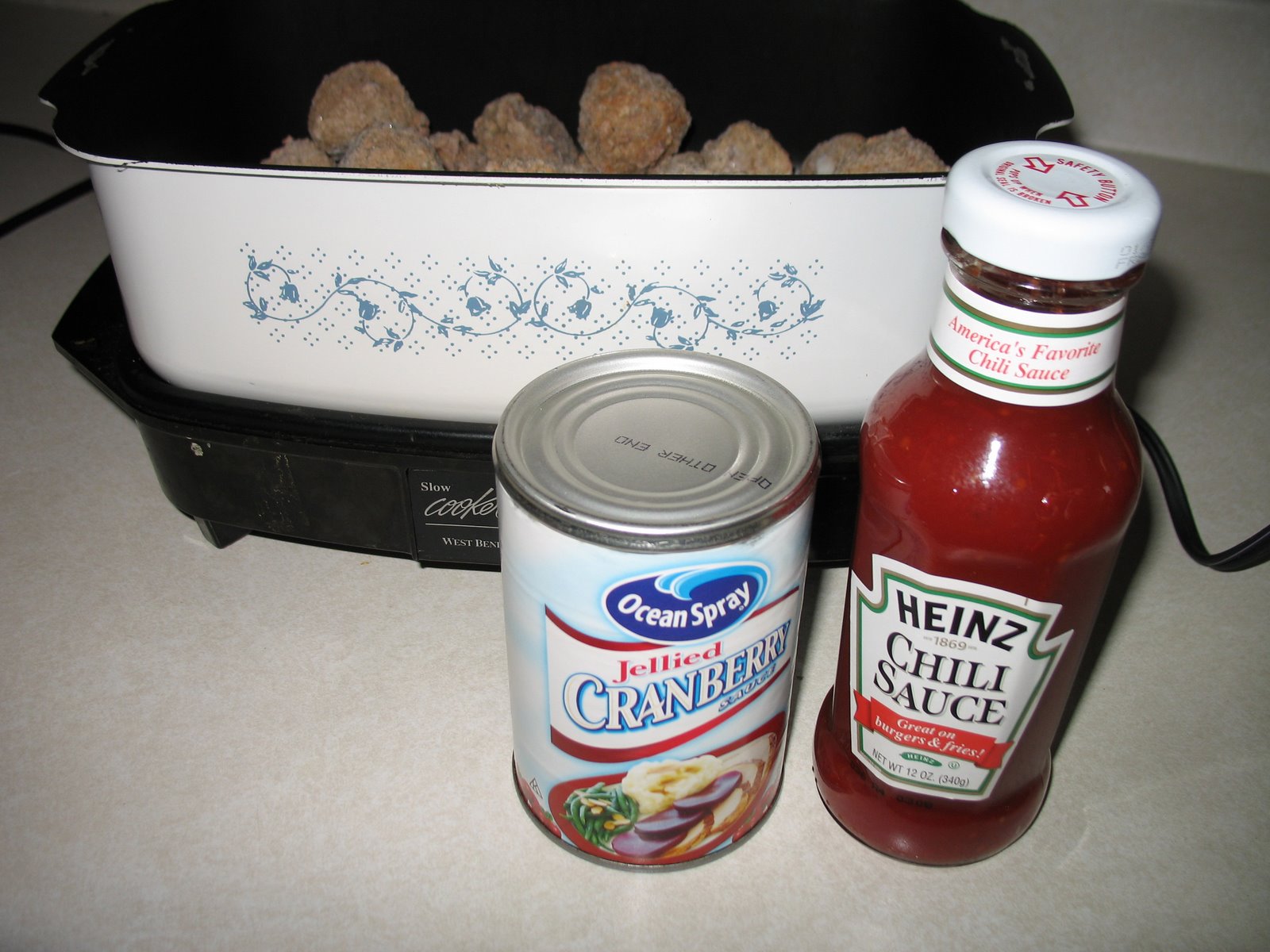 Along came Mom Central and the blog tour for the Ultimate Party Meatballs website.  When I received the invitation, I thought “Hey, those sound familiar.” Then it burst my “Master of the Obvious” bubble when I realized that the recipe I thought was just BBQ sauce really wasn’t.  It’s a bottle of Heinz Chili Sauce, a can of Ocean Spray Cranberry Sauce and of course, meatballs.  Just click on the picture to get the recipe.

This recipe is so incredibly easy it’s worry-proof.  That makes it perfect for when you are in a hurry, have to work before a potluck party or are just busy with family stuff at home.  The other day, I replaced the cocktail sized meatballs with standard sized meatballs and tossed them in the slow cooker.  I combined the cranberry sauce and chili sauce then dumped it over the meatballs.  Throughout the afternoon, I checked on it and stirred it a little but generally left it alone.  When dinner time rolled around, I served them up with mashed potatoes and a side of fruit.  Who doesn’t need an easy dinner recipe at this time of year – even if it’s supposed to be an appetizer?  As a bonus, it reheats well for serving as leftovers.

But whoever thought up the Ultimate Party Meatballs website needs to talk to the rest of the staff and find out who lost their focus.  The website isn’t just meatballs, it’s a whole bunch of other recipes, too.  It should have been called “Ultimate Party Foods” or even “Ridiculously Easy Party Recipes.”  At the site, you’ll find appetizers like wings, bbq chicken dip and nachos as well as main dishes like enchiladas, chili and pulled pork.  Additional  content – entertaining tips, party theme information, party invitations and even a sweepstakes for a chance to win a $3,000 Ultimate Party!

Stop by Ultimate Party Meatballs so your family can create some great family traditions and memories for your kids.

1 thought on “My Appetizer has an Identity Crisis”